Pope Francis and the generational change Pope Francis, the challenge of not reducing religion to culture

Pope Francis and the Synodal Church 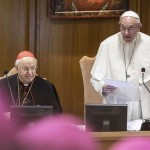 Last week, a meeting of the committees of the Synod on Synodality, which Pope Francis convened for 2023, was held in Rome. It was a meeting to set up a common path, talk to each other, and begin to concretize what should be a Synod that will give a new face to the Church. A synodal face. At least, these would be the intentions of Pope Francis.

Indeed, the Synod has relatively changed its face. In the Praedicate Evangelium, the new constitution that regulates the tasks and functions of the Roman Curia, the Synod is no longer defined as a Synod of Bishops but simply as a Synod.

Therefore, it opens up the notion that a synodal meeting may be considered more an assembly of the faithful than an actual governing body. An idea in line with another of the central themes of the new apostolic constitution: authority is no longer given by episcopal ordination but by the canonical mission.

Therefore, everyone can lead curial departments, and everyone can participate in the Synod. It must be as open a meeting as possible, an exchange that allows, above all, to bring forward ideas without ever putting anyone aside.

The effort of those working on organizing the Synod is considerable. But, in practice, it is a question of collecting different contributions from the five continents, synthesizing them, sending them back to the Episcopal Conferences, and listening again to verify whether the synthesis is proper.

Pope Francis thus implements what has always been a “state of permanent synod.”

Since Pope Francis has led the Church, he has convened two extraordinary synods in addition to those celebrated every three years, and he has tried to broaden the basis of the Synod by calling pre-Synod meetings. He wanted to enhance the discussion further by launching this great synodal assembly for two years, which will end in 2023.

There are, however, some questions that emerge naturally. Will Pope Francis succeed in having a genuinely synodal and listening Church, or will his intentions collide with a reality that he helped to build?

The question doesn’t come out of nowhere. Pope Francis had not loved, in his Synod experiences, Rome’s interventions on the texts, the required adjustments, the continuous revisions. Therefore, perhaps in reaction to this, he arranged for any given final document to consist of all the points (modi in Latin) developed by its drafting committee. Before, only the modi that reached the so-called “synodal consensus,” 2/3 of the votes, were published.

Pope Francis wanted all points to be published and for votes in favor and against each of them to be published as well. The result has been a polarization and the opposite of the communion one should seek at a Synod.

This polarization then led to the debate of the Special Synod for the Pan-Amazon Region. The Synod carried from its birth opposing theories and ideas. There was no attempt at synthesizing nor a genuine desire to solve problems, but rather that of promoting an agenda.

Pope Francis was forced, in the post-Synodal exhortation, to put things right, avoiding disputes such as that of married priests, disappointing many.

The Pope seemingly uses the Synod and discussion more as his laboratory than as a place for collegiality. With the Synod, the Pope collects ideas, understands in which direction common sense is going, and then makes decisions that may be unpopular but which still guarantee he is not going too far, and that he is not saying anything that could harm him.

Therefore, is a synodal Church part of a constant discussion from which the Pope should benefit?

If so, it would betray the real purpose of the Synod. It would rather be the development of a path of a Pope king, as Pope Francis has behaved on several occasions.

Then there is the question of the Synod on Synodality, a name that seems like a tautology. However, the commissions of the Synod points to a different interpretation. That is to say: if the Church is synodal, then the Synod is the life of the Church. Therefore, the Synod does not speak of synodality in a self-referential way; it instead says how the Church lives and faces her challenges and how she can do it by involving all the people of God.

Starting from this philosophy, it is understandable why Cardinal Mario Grech, general secretary of the Synod, proposed at the opening of this synodal path to evaluate a different way of drafting the final document, perhaps without votes on the modalities and to return it to the particular churches, waiting for their amendments before publishing it.

These proposals aim to settle some of the issues that have emerged, intending to make the Synod, if not an actual governing body, an essential part of the Church and a link between Rome and the periphery.

Will it be enough? Hard to say. The Pope’s synodal opening has led the Church of Germany to start a synodal journey that even aims to change Catholic doctrine, and other local synods (such as in Ireland and Australia) risk putting the entire structure of the Church at peril.

Pope Francis finally opened Pandora’s box by intervening little, waiting for everyone’s opinions without overexposing himself. As a result, those who do not understand the structure of the Church attack her, highlight her amnesia and errors and put her in the public pillory.

Therefore, all the Pope’s diplomacy will be needed to control the schismatic temptations and come out with something completely Catholic.

2 Responses to Pope Francis and the Synodal Church