Pope Francis and the Ukrainian crisis. What he did, what he could have done Pope Francis, what promises have been kept? 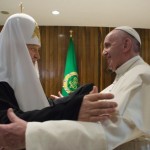 It is unknown if there will be a second meeting between Pope Francis and Patriarch Kirill. Kazakhstan was initially thought (for two years) as a possible meeting place, taking advantage of the festival of religions and the Pontifical Council for Interreligious Dialogue having signed a memorandum of understanding on the issues of dialogue with Nur Sultan. However, the unrest in Kazakhstan, which was followed (here too) by the Russian intervention, scuppered the option. The second option was that of the Pannonhalma abbey, in Hungary, an ecumenical place once upon a time considered for a meeting between John Paul II and Alexey II. It was an eventuality, but that too was wrecked. Finally, another notion is of a trip to Jerusalem, where a joint declaration for peace is signed. But it is also a notion here, and if were to happen, it would be good if it were with all the Christian communities, in an ecumenical push that could only take place from the Holy City.

On his return from Greece, Pope Francis made it known that he was readily available for a second meeting and stressed that it would be a “meeting between brothers, without protocol.” Words that testified to the Pope’s comprehensive openness to dialogue with the Moscow Patriarchate.

In the background, as we know, is Pope Francis’s dream of being the first Pope in history to travel to Moscow. And for this dream, which would have a solid symbolic weight, he is also willing to sacrifice a bit of protocol.

This is testified by the declaration signed in Havana with Patriarch Kirill. Important issues were also addressed, such as Uniatism, but almost always seen from the Russian point of view. Indeed, only the two Orthodox bishops kidnapped in Aleppo were mentioned —there was no mention of Catholics who had met the same fate, such as Father Paolo Dall’Oglio, of whom there have been no trace for years.

The Havana declaration also included two paragraphs on the Ukrainian question. At number 26, we read that “we deplore the hostility in Ukraine that has already caused many victims, inflicted innumerable wounds on peaceful inhabitants and thrown society into a deep economic and humanitarian crisis. We invite all the parts involved in the conflict to prudence, to social solidarity, and to action aimed at constructing peace. We invite our Churches in Ukraine to work towards social harmony, to refrain from taking part in the confrontation, and to not support any further development of the conflict. ”

At point 27, Pope Francis and Kirill underlined that “it is our hope that the schism between the Orthodox faithful in Ukraine may be overcome through existing canonical norms, that all the Orthodox Christians of Ukraine may live in peace and harmony, and that the Catholic in the country may contribute to this, in such a way that our Christian brotherhood may become increasingly evident communities. ”

On La Croix, Yves Lamant, an expert on Russian affairs, said the statement should be updated, calling it “completely obsolete” because it does not consider that there is now an aggressor and an attacked state.

But already at that time, that statement raised problems and had created a broad debate. Major Archbishop Sviatoslav Shevchuk, father and head of the Ukrainian Greek Catholic Church, immediately emphasized that “we can reconcile with our brothers. We cannot reconcile with geopolitics.”

It was 2016. Shortly before the conflict, the major archbishop stressed that he welcomed a new meeting between Pope Francis and Kirill to create the pax ecumenical necessary in Ukraine to avoid any conflict. We must meet to heal the wounds of history.

Pope Francis’s approach, without protocols, without preconditions, risks creating a problem because it does not set stakes from a historical point of view. As if the wounds of history didn’t matter or could be cast aside.

If Moscow fears Kyiv today, it is because it has seen an anti-Russian, pro-European regurgitation in Kyiv, which it does not understand. Moscow feels surrounded and attacks to avoid being attacked. But what Russia does not realize is that the repression, oppression, and persecution of Christians, and the denial of freedoms that existed in the Soviet Union period, are fresh wounds. No one wants to return to that time. Russia is irremediably associated with it. Every attack, every harsh defense of his sphere of influence puts forward the specter of the return of a Soviet power that nobody wants.

There may have been Western support for the 2014 Revolution of Dignity, but the fact remains that the Ukrainians wanted to do everything to break free from Russian influence, no matter what. Ukraine may be a state with various problems, including certain authoritarianism shown in some circumstances by President Zelenskyi, but it remains a people who cannot be subdued.

These are all issues that must be taken into account by the diplomacy of the Holy See and also by Pope Francis. For example, after the meeting with Patriarch Kirill, the Pope hastened to explain to journalists flying from Havana that it was a “pastoral” declaration, inviting them not to read it in a political key. The Pope thinks that he can deal with the Ukrainian question the same way.

It is in this sense that we read the visit to the Russian embassy on 25 February, an utterly off-protocol act, which some have justified by the fact that the Pope wanted to speak with Putin who could only talk on a secure Russian line. We do not know this, but it seems that the Pope’s was only a conversation, with a pastoral purpose. And one wonders why, however, with the same pastoral purpose, he did not go to the Ukrainian embassy to the Holy See, and perhaps even to visit the Ukrainian Greek Catholic basilica of Santa Sofia in Rome from where aid for the country is being coordinated.

The Catholic humanitarian network is doing a great job, and silent diplomacy is cautiously trying to bring about a balance in a difficult situation. Archbishop Visvaldas Kulbokas, the nuncio to Ukraine, also made it known, from a broadcast on the Italian state radio, that one will still have to think about whether and how to maintain relations with a pro-Russian government installed in the event of a Russian victory. Indeed, the Holy See never breaks diplomatic ties. It stays on the ground. It helps people.

Today, a meeting between Pope Francis and Kirill could help Kirill more than Pope Francis. Because Patriarch Kirill appears increasingly isolated in his position of defense of a Great Russia (which is also Putin’s view). At the same time, condemnations, direct or indirect, for the aggression of a sovereign state have come from all the other Orthodox Churches. Indeed, in some cases, people even stopped praying for Patriarch Kirill in the Divine Liturgy, to which the Patriarchate of Moscow reacted harshly.

In all of this, there is a great deal of space for the Catholic Church in Europe to create a truly reconciled continent. Reconstructing the history of the Council of Episcopal Conferences of Europe in my book “Christ the Hope of Europe,” I was able to note how it was precisely the network of local Churches united beyond the Iron Curtain, indeed without considering the Iron Curtain, that created that fabric that allowed the persecuted Church to resist and then to rebuild the continent.

Today, the Catholic Church is asked to act as a mediator to resolve hot conflicts and be a mediator between peoples to heal the wounds of history. Reconciliation between brothers must also become the reconciliation of accountability. But pastoral gestures are not enough for this reconciliation. It cannot be enough to show that you meet. It is not enough to unite on the unique common themes of life and the family. We must work to create a new culture.

Perhaps, the fourth European ecumenical assembly that is being organized could be a starting point. And 2025, the 1700th anniversary of the Council of Nicaea, could represent a rebirth. We must hope so.

3 Responses to Pope Francis, his ecumenical diplomacy in Ukraine