Pope Francis, how the transition is taking place 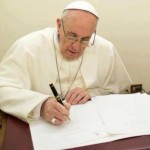 The news that two officials of the Vatican Secretariat of State were promoted to new positions have gone almost unnoticed. The event is revealing of the transition in Pope Francis’ pontificate taking place in the past two weeks.

The appointments can be considered two promotions. Monsignor Carlo Maria Polvani, who headed the Office for Information of the Vatican Secretariat of State, was appointed under-secretary of the Pontifical Council for Culture; Monsignor Alberto Perlasca, who was at the helm of the administrative section of the Vatican Secretariat of State, will become deputy Promotor of Justice at the Supreme Tribunal of the Apostolic Signatura.

The successor of monsignor Polvani in the Secretariat of State is already known: the new head of the office for information is monsignor Mauro Carlino, who also served as secretary of Cardinal Angelo Becciu when he was the deputy of the Secretariat of State. So, there is continuity in the transition. It seems the successor of Monsignor Perlasca will be the Lituanian Monsignor Visvaldas Kulbokas, who until now served in the second section of the State Secretariat and was in charge of the Ukraine dossier. None of the appointments has been officialized yet.

However, the general impression is that a generational change is taking place and that there will be a more substantial change of the guard within the Secretariat of State ranks.

The two appointments might be linked to the resignation of Maestro Massimo Palombella as director of the Choir of the Sistine Musica Chapel. The financial management of the choir was under Vatican investigation. As a consequence of that investigation, Pope Francis transferred the management of the Chapel from the Prefecture for the Pontifical Household to the Office for Liturgical Celebrations.

The investigations bore no consequences for the choir’s director. Everything was suspended. There was a broad discussion within the Vatican: those who defended Maestro Palombella and his position, and those who strongly advocated for his resignation.

With Monsignor Palombella’s resignation and the promotion of the two officials of the Secretariat of State, one of the many transitions in place in the Vatican is now over. It must not be underestimated that the transfers are taking place almost one year after the installation of Archbishop Edgar Pena Parra as new deputy of the Secretariat of State.

Now, the gaze is set on those who will replace the two monsignors, as their positions were very critical. One of the predecessors of Monsignor Polvani at the helm of the office for information was Crescenzio Sepe, who from there climbed up the Church ranks to become the “Red Pope,” that is, prefect of the Congregation for the Evangelization of people, and then archbishop of Naples.

Monsignor Polvani was tapped for the helm of the office in 2011. Because of his position, he was also one of the members of the Commission on Vatican media reform called to revise the proposals of the first committee for Communication established by Pope Francis and chaired by Lord Christopher Patten.

Monsignor Polvani is also the nephew of Archbishop Carlo Maria Viganò, who served as Papal nuncio to the US and general secretary of the Vatican City State Administration. Monsignor Viganò’s testimony and complaints that abuse cases were being mishandled grabbed, and still do today, headlines. Archbishop Viganò’s situation also stirred up the first Vatileaks scandal. Monsignor Polvani was one of the witnesses at the first Vatileaks trial.

The position of administrative director of the Secretariat of State is critical, too. Monsignor Perlasca has led the office since 2009. He followed the whole path of Vatican economic reforms, from the first failures to the adjustments. He could closely observe the work carried forward by Pope Francis. Shortly after his election, Pope Francis set economic affairs as a priority and established the Commission of Study on the organization of the economic-administrative structure (COSEA) and the commission to study the situation of the Institute for Religious Works, the so-called Vatican bank (CRIOR).

Perlasca’s office has always been considered the situation room for the Holy See’s economic and administrative policy, and it has always been led by Italians. When the Secretariat for the Economy was established, word came that Cardinal George Pell and the Office were not in good terms. It was the first time that the Vatican economy was under the hands of a non-Italian.

The fact that Cardinal Pell did not succeed in some of his goals does not mean that the Secretariat of State was weakened. After Pell’s reform, there were structural adjustments to the reforms to adequate them to the requirements of a State as particular as the Holy See. These adjustments, however, went beyond the Italian approach, mostly focused on good neighborhood relations with Italy. The adjustments revamped the old discussion that took place already under Benedict XVI’s, on the Vatican financial law.

These moves, along with others that are not made public but are significant, show that there is an ongoing essential transition within the Vatican.

Pope Francis is setting up his team in the Secretariat of State. This new team will have no connections with the old guard. The guarantor of the transition is Cardinal Pietro Parolin, who is the only bridge remaining between the old and the new reality. With Cardinal Parolin, the Secretariat of State regained its centrality, against an initial project to dismantle it.

It is yet to be seen how this centrality will be interpreted. The new appointments will allow a much greater insight to this process. After the issuance of the statutes of the Pontifical Theological Institute John Paul II, these internal moves indicate that the pontificate has taken its course. No matter how the Curia reform, which is still under discussion, evolves.