Is Pope Francis Leaning Toward The Establishment Of An Informal Permanent Council? The Pope’s diplomacy, serving the world 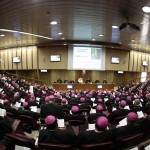 The preparatory document of the extraordinary synod for the family grabbed headlines only because of the questionnaire attached to it. It was comprised of 38 questions, posed in an unusually straightforward manner, addressing issues very pragmatically.

This pragmatic style is the only reform that has taken place under Pope Francis so far. There have always been questionnaires at the end of the lineamenta (i.e. the preparatory documents of the synods, anyway a larger one whose final questions help to address the topics). Generally, they were delivered by the general secretary of the synod to the president of the national bishops’ conferences, who in turn would deliver them to the bishops. The bishops would deliver them to the priests in their dioceses, and eventually the priests would deliver them to their pastoral councils, catechists, and lay people active in their parishes. The «chain» of transmission was not always completed. And there had always been a sort of central coordination in managing the answers from Rome.

There is nothing new in having a questionnaire. The same is true about a possible reform of the synod of bishops, an issue that has been discussed over the decades.

In fact, Paul VI tried to reform the synod of bishops, and his efforts were carried forward by all the Popes that succeeded him. A possible «middle way» between a synod of bishops representative of the whole Church and the need for a central coordination in Rome has been sought for long time. Pope Francis hopes to find it.

This is perhaps the reason why Francis wanted to convoke the soonest he could an extraordinary synod on the family, specifying that it is the first of three steps. The first step is the extraordinary synod, that will take a «snap shot» of today’s family; the last step will be the general ordinary synod (planned for 2015) on the same topic, intended to provide guidelines; and in the middle, the World Meeting of Families.

More than a reform, it is a modus operandi, somewhat following the model of the general assembly of the CELAM, the Conference of Latin American bishops that Pius XII founded.

Pope Francis is moving fast, because he knows that only during the first years of Pontificate can a Pope really exercise his authority effectively.

At this time, Pope Francis can leverage his huge popularity with the crowds that come to St. Peter’s Square to listen to him, and who believe that there is a new atmosphere under St. Peter’s Dome. When an official of the Secretariat of State was asked about how things were going under the new Pope, he opened the window of his office in the Apostolic Palace, pointed at the crowds in Saint Peter’s Square, and asserted: «How can it be, if not well?»

Crowds, however, do not amount to consensus. The Pope was elected by cardinals, not by a large electorate in a poll. According to rumors about the pre-conclave meetings, Pope Francis was seen as the person who would reform the structure of the Church. After the patient work of John Paul II (Pastor Bonus was issued under his pontificate) and its consolidation by Benedict XVI, cardinals thought it was the right moment for a turning point. Not all the cardinals had that anti-roman and anti-Curia bias that especially affects the cardinals further away from Rome. All of the cardinals were however convinced that it was time for a significant leap forward, at least at the managerial level.

So, riding on his popularity with the crowds, Pope Francis is trying to carry out all the reforms he has in his mind in the shortest time he possibly can.

Bishops in England and Wales seemed to have wanted to contribute to reform the synod. They did so, however, naively. Before the preparatory document was issued, they posted the questionnaire online on the website “surveymonkey.” As a result, anybody could answer the questionnaire, even if they were not from a British diocese (one could simply pretend to be from a British diocese). More than an exercise in democracy, it showed a certain lack of judicious restraint. This was so, as well, because the Bishops’ Conference still had to review answers before forwarding them to Rome. The general secretary of the synod, Msgr. Lorenzo Baldisseri, also invited the faithful to respond to the questionnaire and to send everything to Rome. Obviously, the Vatican bureaucracy will review these responses.

All of this can hardly be defined as change. Indeed, change is sought and needed, but no one knows how to manage it. Discussing possible changes requires the involvement of Canon law experts, Vatican officials, and even the Secretariat of State, because it addresses issues like: How to organize the government of the Church? And how to preserve the Petrine primacy?

Introducing the document in a press conference, both Msgr. Baldisseri and Cardinal Petr Erdo (general rapporteur for the synod) underscored –intentionally– the need for «collegiality», and not «synodality».

Msgr. Baldisseri also explained that Pope Francis – who chaired the meeting of the Council of the Synod Oct. 7-8 – wants to «make of the synod, as an institution, a true and efficient tool of communion through which the collegiality hoped by the Second Vatican Council can be expressed and realized.» According to Msgr. Baldisseri, Pope Francis also wants to reinforce the activity of the general secretariat of the synod of bishops «so that it can adequately fulfill its mission to promote the episcopal collegiality» cum Petro et sub Petro «in the government of the universal Church.» This would represent not only «structural changes,» but also a «functional adjustment.»

These words would seem to contradict a general understanding that, under Pope Francis, synodality would experience a push forward, and those who referenced synodality in talking about an ongoing overhaul.

True, Pope Francis has said that he wanted more synodality, and referred to the Orthodox Churches as examples. On the other hand, their synods are one of the reasons why Orthodox Churches become ungovernable and internally divided, able to take extraordinary steps forward and huge steps backwards.

That of the synod of the Orthodox Churches is not a method that fits with Pope Francis’ personality. Speaking with journalists on his way back from Rio de Janeiro, Francis said that he liked collaborators that tell him “no” sometimes, and did not want to be surrounded by yes men. This is true. Listening is one of the Jesuits’ main skills, and Pope Francis is very much a Jesuit.

But he is a decision-making Jesuit. He himself admitted that he had problems with the Company of Jesus because, as a provincial superior, he would take decisions brusquely.  Experience and maturity made him more “consultative”. However, in the end it’s always him to decide.

The second reform Francis is thinking about is that of the statutes of the Italian Bishops’ Conference (CEI), the only bishops’ conference in the world whose president is not elected by fellow bishops but chosen by the Pope as primate of Italy.

Someone within the CEI felt so bound to petrine primacy to propose to call the president of the Conference «deputy president.»

Yet,  during the 23rd general assembly of the CEI held in Rome from the 7 to the 11 of May, 1983 the bishops considered the possibility of electing their president. In the course of the sessions to approve the new statutes of the CEI – which, among other things, would raise the duration of the mandate from three to five years – the bishops, “on orders from above,” were invited to participate in a non-binding vote regarding the possibility of electing the president and secretary general of the conference, the results of which would be delivered to the Holy Father, who retained the last word on the matter.

This means that the vast majority of the bishops voted in favor of an elected president, although they fell just six short of the quorum of two thirds (in this case, 151 votes) required for changes to the statutes. A quorum that was instead exceeded for the election of the secretary general.

In any case, on October 25, 1984, during the 24th “extraordinary” general assembly held in Rome, then president Cardinal Anastasio Ballestrero, the archbishop of Turin (who led the CEI for more than six years), informed that John Paul II  wanted to reserve for himself the appointment of the president and secretary general of the Italian bishops’ conference, “pointing out how this practice constitutes a further sign of attention and benevolence toward the bishops and the CEI on the part of the Holy Father.”

Generally, the Pope would consult with Italian bishops before appointing their president. But the procedure of consultation, and the consultation itself, always remained secret, except in a couple of cases, when they were leaked to the press.

Pope Francis has a different view about the role of the bishops, also Italian bishops. He wants to give to local churches more decision-making power, so he started thinking about a reform of the statutes of the CEI. This is why he only prorogated Msgr. Mariano Crociata as the CEI’s general secretary for one year, instead of confirming him on the post (which would have extended his tenure five more years).

But both the Vatican daily newspaper L’Osservatore Romano and the Italian bishops’ conference newspaper Avvenire headlined that Crociata had been confirmed.

Pope Francis did not like the headlines, which he considered a sort of impromptu halt to his reform idea. Leaving the church where St. Francis tomb is at, in Assisi, on Oct. 4, he complained to the director of Avvenire, Tarquinio, for the mistake. Before, he had blamed it on Gian Maria Vian, director of “L’Osservatore Romano”, according to Mondayvatican sources.

Other sources maintained that Pope Francis complained to Vian about the Osservatore Romano re-publishing the free-flowing conversation the Pope had with Scalfari, the director of the secular Italian newspaper La Repubblica, who had published it already as an interview. Pope Francis did not refute any word of the interview, which is still posted on the Vatican website, translated into six languages.

Among consultations and ideas, Pope Francis’ reform goes on.

Pope Francis is putting his trust in those rooted in Doctrine, appointing them to key posts, in order to provide “magisterial” roots to his actions.

He confirmed at his post the Prefect of the Congregation for the Doctrine of the Faith, Gehrard Ludwig Mueller, who was charged with drafting an article that reaffirmed the Church Doctrine on divorced, remarried people; he appointed Cardinal Petr Erdo as general rapporteur of the extraordinary synod for the family, who drafted a document that lays out the magisterium on the family (from the encyclical Humanae Vitae to the Apostolic exhortation Familiaris Consortio); he asked Cardinal Rodriguez Maradiaga to be the coordinator of the Council of Eight Cardinals advising him on a possible Curia reform because he deems Maradiaga as «a great organizer.»

Only time will tell if this choices are good. At the moment, the reform of the Church keeps moving, in continuity. In fact, a “functional adjustment” (as msgr. Baldisseri called it) is needed for the synod as well as for many bodies of the Church. Pope Francis wants it fast. He senses the risk that the Vatican bureaucracy halt him. He needs to find a balance between institutionalism and reform. And he needs not to be trapped in the middle of “partisan” battles. Ultimately, the Curia of the old days backed Jorge Mario Bergoglio’s election. Did they think they could trick him? And to what extent are they succeeding?