Pope Francis, towards a revolution? Is Pope Francis at risk in the Vatican London trial?

Pope Francis, what to expect in the coming year 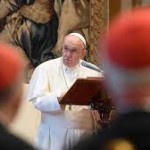 2021 did not end, as many expected, with the reform of the Curia. 2022, on the other hand, could begin with the announcement of a new consistory, which was expected to take place in November and which should instead take place in February.

Pope Francis’ 2021 was the year of the change of direction. It was not just a year still marred by the pandemic, but a year when Pope Francis’ health problems became evident. First, sciatica forced him to postpone the usual meeting at the beginning of the year with the diplomatic corps. Then, diverticulitis required the removal of 33 centimeters of his intestine and a lengthy hospital stay.

Pope Francis lamented, after his hospitalization, that there were already preparations for the succession. And that was probably the moment when he decided that his decisions should be even less predictable. There are several officials to change and a Curia to reform. But the Pope will probably not do it according to traditional methods. Instead, he will hide his moves until the end.

Thus, the outgoing Church of Pope Francis seems to have become a Church that is closing up. It closes itself in the decisions of the Pope, which often come suddenly, as well as in his public declarations, which at times leave us perplexed. It closes when the reform of the Curia is not finished, but the people at the top are changing, while the Pope appoints commissions that seem to have more the purpose of intimidating than of completing a real job.

After all, the inspection at the Congregation for Divine Worship lasted about a week, even less than at the Congregation for the Clergy. At the same time, the inspection in the Dicastery for the Promotion of Integral Human Development required a team led by Cardinal Blaise Cupich. This dicastery begins the year full of uncertainties, with an ongoing generational change and an interim prefect that already seems to indicate a new direction.

What this new direction will be is unknown. Suddenly there was no more talk of the reform of the Curia. The official communiqué of the last Council of Cardinals did not mention it and that had seemed to be a sign that the text of the Praedicate Evangelium was now finished. But, in reality, the Pope did not mention the reform even in his speech to the Curia. In the past, he had defended the reform and even indicated what decisions had been made. And, speaking to COPE in September, he had made it clear that many of the reform decisions were already underway.

Perhaps this latter awareness made the Pope decide that there is no need for an actual text because he can legislate with motu proprios and thus merge departments and administrations. These merging will be over by mid-year. In the meantime, a text can be published even before Easter, but it will not be decisive. More than sloppiness, it becomes part of a precise, systematic modus operandi, which centers the whole institution and its functioning on the Pope himself.

It is a modus operandi that does not look to the aftermaths and does not even look to a possible vacant seat. There is a Camerlengo, Cardinal Kevin J. Farrell, and there has never been any news that he was sworn in for that responsibility. There is no Camera Apostolica because the members have not been renewed after their five years of service, and no new ones have been appointed. Indeed, the Apostolic Chamber is not found in the Pontifical Yearbook of 2021. In the event of the Pope’s death or resignation, it is to be determined who will manage the sede vacante.

These are not structural reforms but changes to laws or new decisions that would need more structural definitions. The idea of the reform in progress generally moves along through errors and corrections, as we have seen at various times. One above all: the announcement of the establishment of the personnel office in the Secretariat of State, announced by the Press Office of the Holy See and then denied just the next day with a press release, from the same Press Office, explaining that establishing the personnel office was just a study hypothesis.

The latest reform of Pope Francis was initiated de imperio, establishing with a motu proprio the verification of the application of the Mitis Iudex Dominus Iesus, a document that reformed the process of matrimonial nullity. It is a decision that aims to “impose, rather than propose, a path to the bishops.

But this is the last administrative act of a year that, from a legal point of view, was full of developments. The motu proprio Traditions Custodes has practically closed any opening to traditionalists. The motu proprio Antiquum Ministerium established the ministry of the catechist. Then the motu proprio which made it possible for the cardinals to be tried by the Vatican Tribunal, and which follows the motu proprio at the beginning of the year which amended Vatican legislation; the anti-corruption motu proprio which serves to apply one of the UN conventions to which the Holy See adheres; and finally the institution of the Lectorate and the acolytate for women.

In addition to reforming, the Pope showed his vocation to punish or to do justice, according to the points of view. The season of trials (or of justice) in the Vatican, defined by Holy See communications as an act of transparency, in reality, hid a problematic situation. With four rescripts, the Pope changed the rules of ongoing trials, many procedural guarantees were not followed, and in some cases, the investigation had to be restarted from scratch.

These procedural defects would have made any process invalid, but not in the Vatican, where the Pope decides. And where the risk of a Vaticanization of the Holy See, precisely because of the management of the processes, could lead to severe institutional problems at the international level.

There is the will to show a Holy See attentive to public opinion. Pope Francis explained this, underlining that the acceptance of the resignation of Archbishop Michel Aupetit had reached the altar of hypocrisy. Although not so explicitly explained, similar cases had occurred with Cardinal Rainer Maria Woelki and Cardinal Philippe Barbarin. Once again, it is a Church that closes in on itself to be open.

And it risks closing even in its most resounding reform, the Synod of Bishops. In 2021, the Pope launched a two-year process that could also lead to a synod reform. Cardinal Grech, secretary of the Synod of Bishops, said that a no-vote mechanism could also measure consensus. How, then, to arrive at community decisions?

In 2022, everything could still be centered on the decisions of the Pope, who will move surgically, trying to hide his intentions until the end. Because, after all, even the Pope has closed in on himself a little. It remains to be seen if he did it because he feels that his pontificate has ended or because he wants to give new impetus to his reforms.

9 Responses to Pope Francis, what to expect in the coming year