Credo. Toward the Year of Faith. From Paul VI to Benedict XVI Message for the World Day of Peace: what it is, what it would have been

A rabbi talks with the Pope. To save the world from religious indifference 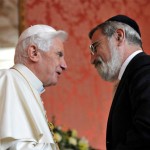 «We are witnessing a growing indifference to religion in society, which considers the issue of truth as something of an obstacle in its decision-making, and instead gives priority to utilitarian considerations. Religion is one of these foundations for a successful social life». These words Pope Benedict XVI said in Germany, after the meeting with German president Christian Wulff.  «The supreme irony of our current situation is that it came about in a secular age not because of a lack of faith but because of too much faith in the wrong things. Faith in the market as a self-correcting system. Faith in the securitization of risk, as if you could eliminate uncertainty by paying someone else to carry it on your behalf. Faith in regulatory authorities to rid the world of sin. Faith in the combination of the market and technology to generate ceaseless economic growth», Chief Rabbi of Commonwealth Jonathan Sacks recently said.

Benedict XVI and Jonathan Sacks will be having a private meeting in the Vatican. Quite interesting to see how the head of Christianity and the head of Jewish Communities in the Commonwealth share such a similar vision. Is it a signal of the resurgence of religions in the public sphere?

Benedict XVI truly believes on the importance of the role of religions in the public sphere. Since the beginning of his pontificate, interreligious meetings had always been scheduled in his international trips agenda. The proposal made by the Pope is the one of a sort of alliance among religions, to get religious thought back in the public sphere. «Meetings of this sort – Benedict XVI remarked the day after the 27th of October meeting in Assisi –  are necessarily exceptional and infrequent, yet they are a vivid expression of the fact that every day, throughout our world, people of different religious traditions live and work together in harmony. It is surely significant for the cause of peace that so many men and women, inspired by their deepest convictions, are committed to working for the good of the human family. In this way, I am sure that yesterday’s meeting has given us a sense of how genuine is our desire to contribute to the good of all our fellow human beings and how much we have to share with one another».

Is religious spirit the answer to the modern times? «We are where we are – Rabbi Sacks said – and the only way to look is forward. The question for many of us must surely be: what is the best investment over the next few years? It isn’t the stock market. That may crash. It isn’t housing. Its value may fall. It isn’t works of art. Who knows what taste will be, ten or twenty years from now? The best investment right now is in spiritual goods: in love, trust, friendship and forgiveness, in prayer and celebration and the life of the soul. Now is the time to invest in the deepest sources of happiness: in marriage, family and home, and the bonds of love between husband and wife, parent and child. Now is the time to invest in community and the supportive networks of people with whom we share our prayers, memories and ideals. Community is where our joys are doubled and our sadness halved by being shared with others».

If we’d go on crossing quotations, we should follow many others common views between Benedict XVI and Rabbi Sacks. They are both concerned for the «false Gods» (in Papal words) or the «too much faith in the wrong things» (in Rabbi’s words); they both are very attentive to the future of the Faith (and Rabbi Sacks wrote a book on the topic); they both see that one can only invest in the true values, since this is the only antidote to religious indifference.

The question of religious indifference had been widely discussed also during the Second Vatican Council. The pastoral Constitution Gaudium et Spes, reviewing from a phenomenological point of view the various forms of atheism, a word which «is used to signify things that differ considerably from one another», also contains this note: «There are also those who never enquire about God; religion never seems to trouble or interest them at all, nor do they see why they should bother about it» (n. 19). The phenomenon of religious indifference can be recognized in these words. It is perhaps—many people are inclined to think so today—the most widespread and, from some standpoints, the most serious form of unbelief.

Also with regard to religious indifference as to atheism and agnosticism there are authors such as Scheler, Rahner, Tillich, Grühn, who question its existence. To their mind the psychical structure of man is such that it is never possible for it to break off with the Absolute. «Every man –  Werner Grühn writes – believes in God, and it does not matter whether he admits it or not. Radical (or “scientific”) atheism is rather an artificial product of armchair speculation, a theoretical invention of some heads that are not always among the best».

Still in the Gaudium et spes we read that «man is continually being aroused by the Spirit of God and he will never be utterly indifferent to religion — a fact proved by the experiences of ages past and plentiful evidence at the present day. For man will ever be anxious to know, if only in a vague way, what is the meaning of his life, his activity, and his death. The very presence of the Church recalls these problems to his mind. The most perfect answer to these questionings is to be found in God alone, who created man in his own image and redeemed him from sin» (n. 41).

From the century of Enlightenment onwards, religious indifference has been invoked as a sign of the intellectual maturity of modern man or as the condition to realize his perfect liberation. It was claimed that man had become, or that at least he was on the right way to become, completely self-reliant and self-sufficient, capable of solving all problems and of satisfying all desires, without having recourse to God. Consequently he could, and should, set him aside and behave as if he did not exist: etsi Deus non daretur.

Was truly this the path to follow? Benedict XVI, on the other side, always invited to live etsi Deus daretur, as God exists. It is a issue that not only deals with ethics, but even with moral action in life. Would living as God exists change the dramatic economical situation? Benedict XVI believes so, and he wrote it in the encyclical Caritas in Veritate, where he dedicates a paragraph to the gift. «The economy and the market – the Pope warned in his address before delegations of the Confederation of Italian Cooperatives and the Italian Federation of Cooperative Banks – must never be separated from solidarity». «Social capital –Rabbi Sacks said some time ago during a conference  – is alive and well, and exists in churches and synagogues. Religion works, whether you believe in it or not». And then he stressed that community, not theology, seems to be the determinant. Commenting on America’s obsession with «God». the Rabbi mused that in America, «everyone has to talk about God – in England it‘s different … we don’t do God». No surprise that – during his 2008 trip to United States – Benedict XVI praised the “positive laity” of America.

Religions, faith, identity, conversation, social capital: these are the pillars on which the resurgence of religions stand to build a new civilization. Rabbi Sacks and Benedict XVI based their leadership on these pillars. They both want to do God in society. When the rabbi will be talking with the Pope, they will have a lot of things in common to speak about.