Message for the World Day of Peace: what it is, what it would have been Financial transparency and Holy See. Chronicles of an anniversary

Christmas according to Joseph Ratzinger 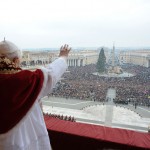 Specola Vaticana (Vatican Obsevatory) is an astronomical research and educational institution supported by the Holy See and held by Jesuits. For centuries, Jesuit Fathers went up to the telescope in the observatory in Castel Gandolfo, and from that privileged point of view they looked at the sky, trying to catch the sense of heavern. Nowadays, Vatican Observatory in Castelgandolfo is something more than a museums. The tools can still work. But the lights that light the city of Rome (and the lights all of Europe as well) are so brighting that it is practically impossible to observe the stars. So, a new observatory had been built in Mount Graham, Arizona, Usa.

Joseph Ratzinger goes to visit Specola headquarters in Castelgandolfo right a few days before Christmas in 1994. He is impressed by it. And he talks about it during the homily held in the collegiate church of Berchtesgaden, in the Christmas Eve Mass. He compares the observation of the sky to the search for God, the first as a metaphor of the second. And – during the homily for the Christmas Eve Mass – he remembers his visit, concluding that «the lights of men, the lights we produced, hide the light of sky. Our lights hide the stars of God. It is almost a metaphor: because of the too many things we created, we can barely recognize the traces of the Creation of God, and the Creation itself».

Benedict XVI always considered Christmas Day a special day. In that day, his family gathers, and his brother Georg  come directly from Germany. Georg and Joseph eat together the typical German lunch. Then, they both meditate on the mystery of the birth of God, usually in the front of a Christ’s Nativity. There are two Christ’s Nativities in the Papal house, and one of those is the old Christ Nativity that Georg and Joseph built when they were little boys. In front of it, Benedict XVI prays, and makes his reflections. And part of this reflections can be found in the homilies he held when he was still not Pope.

Let’s make a step back. It is Christmas time in the year 2000, the year of the Jubilee. 30 Giorni, an international monthly magazine, asks Joseph Ratzinger for a op-ed about Christmas. «During Christmas time – he writes – we exchange gift, to rejoice the one with the other and take part to the joy that the choir of angels announced to shepherds, recalling to memory who God gave as gift to humanity: his Son, Jesus Christ. God had been preparing humanity for this gift. During this long story, God got used to be together with men, and men got used to the Communion with God. The story begins with the faith of Abraham. Abraham is the father of those who believe, father of the faith of Christians, our father of faith». For Christians, Israel and the Church cannot be separated. «It is largely known – Ratzinger explains – that every birth is difficult. Surely, the relationship between the rising Church and Israel had been often hostile. The Church had been considered a degenerate daughter by her own mother, while Christians, on the other hand, considered their mother blind and obstinate. During the history of Christianity, the relations – already difficult, indeed – further degenerated, giving birth in several occasions to anti-Judaic attitudes. Even if the abominable experience of Shoah had been committed in the name of an anti-Christian ideology, in order to strike the Christian faith by striking the people of Israel, i.e. its abrahamitic roots, one cannot deny that there had been a certain scarce resistance to this atrocities on the side of Christians, and this can be explained with the anti-Judaic legacy that belonged to not a few Christians».

During his last trip to Germany, Benedict XVI invited people to «turn back to God». He addressed the same exhortation to the faithfuls in the diocese of Munich in 1978, when he was archbishop of the town. During the Christmas Eve Mass homily in the Cathedral of Munich, Joseph Ratzinger said: «Councils, at the origins of the Church, tried to express with words what it was the most inexpressible, unexpected and unconceivable thing: the eternal Son of God has become son of Mary. He who was generated from the Father in the Eternity become a true man thanks to Mary. The true Son of God is the True Son of Man. Nowadays, this dogmas are not taken in great consideration in Christian world. Dogmas seem to us too big, too far to have a true impact in our lives. Christian seems to find that ignoring and just not taking in big consideration dogmas – even considering the Son of God more or less a representative of God on earth – is a sort of “forgivable transgression”. The pretext is that such notions are so far from us that we will never be able to put them in words in a convincing way, and – in the rear – we cannot even understand those concepts. More: we have such an idea of tolerance and pluralism that believing that truth effectively manifested itself seems to us something like a break of tolerance. If this is our way of thinking, we just cancel Truth, man is just a being that will never be able to understand what is true, and we oblige ourselves and the entire world to adhere to an empty relativism».

These words Joseph Ratzinger pronounced in a Christmas Eve Night 33 years ago. They had become the main topic of the whole pontificate of Benedict XVI.

One Response to Christmas according to Joseph Ratzinger