Blessed are the peacemakers. May they be prophets of a new social evangelization Benedict XVI’s Christmas Triptych

In a letter to Child Jesus, Ratzinger’s life agenda. Which the Pope restated in his most recent speech to the Curia 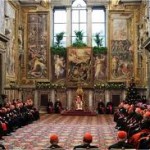 «Dear Child Jesus, soon you will descend on earth. You will bring joy to children, and I will be joyful, too». This is the beginning of a 1934 Christmas letter, as reported by the web site korazym.org. The author was a 7 years old child. It was scripted in Sütterlinschrift, the typical italic calligraphy of that time. The author was Joseph Ratzinger, Pope Benedict XVI.

What did the Pope wish when he was 7? «I would like – he wrote – the Volks-Schott, a green suit to celebrate the Holy Mass and a Jesus’ Heart. I will always be good. Best regards, Joseph Ratzinger.» The letter was so peculiar that Maria – the Pope’s sister, who took care of Ratzinger until her death – decided to keep it. The letter was recovered when Ratzinger’s house in Pentling was being restored. The house is now a museum, inaugurated at the end of last summer by Georg Gaenswein, then Benedict XVI’s private secretary. Gaenswein reported that the rediscovery of the letter «made the Pope very happy, and made him smile.»

What is most striking is that little Joseph does not ask for toys or sweets. He asks for the Schott, one of the first books in German with a breviary and missal (with its text in Latin also). At that time, two editions were available in Germany: one for children and one for adults. Little Joseph, through that book, begins to love the liturgy that sets the rhythm of his family’s life. Little Ratzinger then asks for a vestment to celebrate Mass. No surprise, because the Ratzinger brothers used to pretend to be “parish priest”, and their mother made vestments for that. «We pretended to celebrate Mass – Georg Ratzinger, the Pope’s brother, told the American monthly Inside the Vatican – and we had vestments made for us by our mother’s seamstress. In turns, one of us was the priest and the other the altar boy». Finally, little Ratzinger asks for a «Jesus’ Heart» i.e. an image of the Sacred Heart, which his family was very devoted to.

Just an anecdote. But perhaps one should keep in mind this anecdote when Benedict XVI delivers his speeches. Whenever he defends family, there is something about memories of his own family. That it was a happy family, which life rhythm was set by liturgy, and where all rejoiced with one another.  It was a family in which it was sensible to be, because it represented the best for a child’s growth. When he became theologian, Joseph Ratzinger expanded his reflection on the meaning of family, based on the Holy Family of Nazareth. Through the example of the Holy Family, he wanted to explain why a «traditional» family was needed. This defense of family started on strictly theological basis. But also on a rational basis.

An idea the Pope has put front and center in his Christmas address to the Roman Curia. In that address, the Pope generally looks back at the life of the Church in the year that is coming to an end. As usual, the Pope flew high. No hint of Vatileaks, nor of internal problems: in the end, these problems really do not amount to much, just petty miseries of the human condition, when compared to the Church’s challenges and agenda. So, Benedict XVI put on the table three issues that marked the Church’s life and that will be on the agenda for the next ten years: family, dialogue, and new evangelization.

The Papal address starting point is the family.  The Pope approaches the topic through the arguments which the Chief Rabbi of France Gilles Bernheim made in defense of the traditional family. Bernheim also sent to the French President François Hollande a 25 pages brief, to explain all the reasons why he and his community are against «marriages for all».  The Pope states: before, the family was in crisis due to a misconception of freedom; today, the very idea of man is in crisis.

This crisis has a specific name: gender.  It is at the same time a neutral and lethal name, as is much of the new «vocabulary» promoted in United Nations documents and continuously denounced by Holy See officials.

Gender points to the human being that calls his own nature into question. «He – the Pope says, drawing on German idealism philosophy – is now only spirit and will.  The manipulation of nature, which we deplore today where our environment is concerned, now becomes man’s fundamental choice where he himself is concerned.  Nowadays, there is only the abstract human being, who chooses for himself what his nature is to be». If there is no more duality, if human being loses his identity, there is no more family.  «When the freedom to be creative – Benedict XVI notes, with Bernehim – becomes the freedom to create oneself, then necessarily the Maker himself is denied and ultimately man too is stripped of his dignity as a creature of God, as the image of God at the core of his being.  The defence of the family is about man himself.  And it becomes clear that when God is denied, human dignity also disappears.  Whoever defends God is defending man.»

Defending man is the Church’s mission, and integral humanism is the Holy See’s International agenda. This agenda is the basis of the dialogue with states, with societies and with religions. The Church’s– the Pope notes – makes memory part of herself, because «human culture, of which she is a guarantee, has developed from the encounter between divine revelation and human existence.  The Church represents the memory of what it means to be human in the face of a civilization of forgetfulness, which knows only itself and its own criteria.  Yet just as an individual without memory has lost his identity, so too a human race without memory would lose its identity».  And Benedict XVI concludes: «In its dialogue with the state and with society, the Church does not, of course, have ready answers for individual questions.  Along with other forces in society, she will wrestle for the answers that best correspond to the truth of the human condition.»

For what concerns interreligious dialogue, the Pope states that the dialogue does not take place on theological grounds, but on practical and cultural grounds, in order not to lose one’s own identity. How to engage in dialogue? «Dialogue – Benedict XVI says – does not aim at conversion, but at better mutual understanding: that is correct.  But all the same, the search for knowledge and understanding always has to involve drawing closer to the truth. »

And truth is Christ himself, and «both sides in this piece-by-piece approach to truth are therefore on the path that leads forward and towards greater commonality, brought about by the oneness of the truth.» This is also one of the main themes of the first Benedict XVI’s message for the World Day of Peace, meaningfully titled In truth, peace. «Being inwardly held by the hand of Christ – the Pontiff says – makes us free and keeps us safe: free – because if we are held by him, we can enter openly and fearlessly into any dialogue;  safe – because he does not let go of us, unless we cut ourselves off from him.  At one with him, we stand in the light of truth.»

What constitutes the good news, then? Benedict XVI points us to the Gospel passage where Andrew and Simon follow Jesus. Both of them are seekers, and that is why «stimulated by the proclamation, their seeking becomes concrete.» The Pope then explains the proclamation is «effective in situations where man is listening in readiness for God to draw near, where man is inwardly searching and thus on the way towards the Lord.»  The Pope’s wish for Christmas, which is also the agenda for next decades, is to know Jesus better, because as one «walks with Jesus, he is led to the place where Jesus lives, to the community of the Church, which is his body.  That means entering into the journeying community of catechumens, a community of both learning and living, in which our eyes are opened as we walk.»

In the end, it is the same agenda of little Ratzinger. He asked for a Schott as a Christmas gift, a book of liturgies, to lock himself in step with Jesus, starting a long walk in life that brought him to the Papacy.

One Response to In a letter to Child Jesus, Ratzinger’s life agenda. Which the Pope restated in his most recent speech to the Curia