Vatileaks is not over. It may never be True, the Church is 200 years out of date. But not the way you may think.

Why the year of Faith? 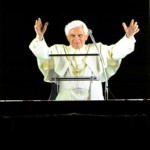 There is a need for faith. Benedict XVI says so, repeats it, and underlines it in the Holy Mass which inaugurates the Year of Faith. This year will be dedicated to return man to God. A year which – significantly – marks the 50th anniversary of the opening of the Second Vatican Council. The Pope admonishes: «If today the Church proposes a new Year of Faith and the New Evangelization, it is not because we must celebrate an anniversary. It is because there is a need for it, a need even greater than 50 years ago. A spiritual desertification has spread out during these years.»

Rome, October 11th. The Pope speaks in front of a half-filled Saint Peter Square. Flanking the altar, the Fathers of the Synod for the New Evangelization and some of the Fathers of the Second Vatican Council still alive. Not all of them could be in Rome. Some of them are very old, and in poor health. All of them have a clear memory of a Council intended to renovate the Church, to find a new way to speak to the signs of the time. Break and continuity. Continuity of the tradition of the faith, break in the way the faith is presented.

It may seem odd, but the «continuity issue» was taken for granted by the Council’s Fathers. True, there were already signs of a sort of faith drift, of that new paganism that has always been one of Benedict XVI’s greatest worries. But it is also true that the Council came about when faith experiences were flourishing in many places: the first workers’ priests in France and Belgium, the theological debate on the Sacred Scripture and its interpretation in Germany, the new need for a praxis of interreligious dialogue, the will to lay an ecumenical path with sister churches… This intellectual ferment came directly from faith, and from the need to measure ourselves up to faith. Faith supported by reason is at the apex of Benedict XVI’s thinking. Joseph Ratzinger immersed himself in this notion during his years as a theologian, and as an expert consultant at the Second Vatican Council. Council Fathers were, above all, men of faith.

They were men of such honest faith and reason that they did not foresee that the spirit of the Council would be later assessed on the basis of its documents, rather than its intentions. They did not foresee either that, as time went by, the enthusiasm generated by the discussion of the documents and by the Fathers’ reasoning on faith, would decline. To the point of falling to the level of indifference toward faith.

Many thus understand the Council as having a «social» impact on the world, but nothing else, because none of the documents of the Council explicitly focused on the question of faith. There are documents on liturgy, mission, religious freedom, and social communication. There is not a document on faith. The Pope admits: «The Second Vatican Council did not want to address faith in a specific, single document. Yet, its thrust was the will and the awareness of the need to dive once more into the Christian mystery, in order to present it again to the contemporary man.»

This awareness has been somewhat quelled by the post-Council discourse. On Wednesday, October 10th, during the general audience, the Pope was already inviting us all to read the Council’s documents themselves, and not to allow ourselves to be misled by the different papers and books that have concealed, rather than broadcast, what the Council wanted to say.

That there is a need for faith is also clear to sister churches. Rowan Williams– Anglican Church primate until December – realizes it, and so he spoke to the synod about the revolution of contemplation. So does Bartholomew I, patriarch of Costantinople, who hoped for full and visible unity among Christians. Yet, there seems to be a bit of sadness in Benedict XVI’s mood.

October, 11th 1962: Azione Cattolica of Italy organized a torchlight procession in the evening – from Castel Sant’Angelo to Saint Peter Square – to celebrate the just-inaugurated Council. Pope John XXIII bends out of the window and addresses participants, with off the cuff remarks. That famous speech is called «Moonlight speech».

«Words full of poetry, of grace, words from the heart», Benedict XVI –bending out of that very same window– tells the participants of a commemorative torchlight march on the 50th anniversary of the first one.

Benedict XVI reflections are bittersweet. Having been among the experts of the Second Vatican Council, he recalls the atmosphere and the feelings at the Council in the introduction to the book Zur Lehre des Zweiten Vatikanischen Konzils (About the Teachings of the Second Vatican Council), published by Herder and edited by Archbishop Gehrard Ludwig Mueller, Prefect of the Congregation for the Doctrine of the Faith.  The book consists of Joseph Ratzinger’s Council writings. The Pope writes in the introduction that the inauguration of the Council «was a moment of great suspense. Major things needed to happen. Previous Councils were almost always convoked to respond to specific questions requiring specific answers. This time, there was not a particular problem to solve. That is precisely why there was a general sense of suspense in the air: Christianity – which had built and shaped the Western world – seemed to be losing its forcefulness ever more. It seemed to have grown tired, and it looked as if other spiritual powers would decide the future.»

Before the People of God gathered at Saint Peter’s Square for the torchlight march, Benedict XVI’s words echo the somberness of the 2005 Via Crucis Meditations, when he spoke about the «filth» inside the Church.  «Fifty years ago – the Pope says – the big Ecumenical Council was inaugurated, and we were convinced that a new Spring for the Church would come about, a new Pentecost, a new strong presence of the liberating Grace of the Gospel. To this day we feel happy, we carry joy in our hearts, but it is, I would say, perhaps a more measured joy, a humble joy.»

It is because – the Pope adds – «during these last 50 years we have learned and experienced that original sin exists and manifest itself in personal sins that can even become frameworks of sin. We saw that in the Lord’s field there is always the darnel. We have seen how in Peter’s fishnet there are also bad fishes. We have seen that human frailty is present in the Church as well, that the Church’s boat is sailing against the wind, with storms threatening it. And sometimes we have thought: ‘Where is the Lord? He forgot about us!»

The Pope points out that this is «just part» of what has happened during these years, and he reassures us that «the Lord does not forget about us. Even today, humbly, the Lord is present and warms our hearts, He reveals life, He creates charismata of goodness and charity that shed light on the world and are proof to us of God’s goodness. If Christ is alive, He is here with us today, and we can be happy also today, because his goodness cannot be extinguished, it is strong even today.»

There is a need for Faith in order not to lose the spirit of the Council.