The bonfire of vanities. A curial story. From Ireland with worries. A new Papal nuncio to stop the Irish crisis.

Africa. A continent of hope. Even for the Church. Now more than ever. 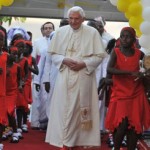 The image of the hand is the perfect summary of the speech that Benedict XVI held with the government members, representative of State Institutions, Diplomatic Corps and Major Religions. Just look at the hands, and you will find out that – as Benedict XVI put it – each finger is  «essential and their unity makes a hand. A good understanding between cultures, consideration for each other which is not condescending, and the respect of the rights of each one are a vital duty. This must be taught to all the faithful of the various religions. Hatred is a failure, indifference is an impasse, and dialogue is an openness! Is this not good ground in which seeds of hope may be sown? To offer someone your hand means to hope, later, to love, and what could be more beautiful than a proffered hand? It was willed by God to offer and to receive. God did not want it to kill or to inflict suffering, but to care and to help live. Together with our heart and our intelligence, our hand too can become an instrument of dialogue. It can make hope flourish, above all when our intelligence stammers and our heart stumbles».

Benedict XVI went to Africa to deliver the post-synodal exhortation. Two years ago, the special synod for Africa that took place in Rome was very little covered by the media.  But it was «good work» – the pope then said – since it was able to mediate sufficiently between the political and spiritual dimensions. «And for me – the Pope said – this is also a reason for thanks because it makes the post-synodal document easier to draft». The penultimate act of that synod were the 57 final propositions delivered by the assembly of African bishops. The propositions touched on many topics including «greater ecclesial communion at all levels, encouraging cooperation within the Church», as well as an appeal to all those who are at war in Africa: «Stop the hostilities and be reconciled!» Another theme that was frequently discussed was the environment. Observing that there was «an irresponsible degradation and senseless destruction of the earth, which is ‘our mother’» the Synod Fathers noted  that «some businesses, governments and multinational and trans-national companies engage in business that pollute the environment, destroy flora and fauna, thus causing unprecedented erosion and desertification of large areas of arable land… in complicity with those who exercise political and economic leadership in Africa». The bishops also raised their voices on the issues that impact women. They rejected abortion and  so-called reproductive health rights of women, calling instead for the defense of the family and of human life.

All of these topics had been issued by the Pope during his short trip to Benin. «Africa is a continent of hope», Benedict XVI claimed. Hope is the key-word to understand the trip to Benin. As a key-speech was the one held in the Presidential Palace, on November, 19th. After the speech, the Pope moved to Ouidah, 43 kilometres far from the capital of Benin Cotonou from where – at the beginning of the 18th Century – every year 20 thousand slaves taken from all the Western Africa left to the Usa. In Ouidah, Benedict XVI finally deliver the post-synodal exhortation, Africae Munus, African Commitment. The commitment that Benedict XVI delivers to Africa is an important one. From Africa, he warns all the leaders of the world  against political corruption, scandals, instrumentalizing the name of God to justify violence and the individualism that generates despair.

Pope appeals to all political and economic leaders of African countries and the rest of the world to not to manipulate their people and not to deprive their  peoples of hope. «Do not cut them off from their future by mutilating their present! Adopt a courageous ethical approach to your responsibilities and, if you are believers, ask God to grant you wisdom!», the Pope said.

The background of African countries is filled with the Arab Spring and the recent - and Church sponsored – independence of the South Sudan. Neverthless the worries for the future of the Christians after the Arab Spring – especially in Egypt and Libya – the Pope favorably see to the claim of the people. During these last months – he said –  «many peoples have manifested their desire for liberty, their need for material security, and their wish to live in harmony according to their different ethnic groups and religions. Indeed, a new state has been born on your continent. Many conflicts have originated in man’s blindness, in his will to power and in political and economic interests which mock the dignity of people and of nature. Human beings aspire to liberty; then to live in dignity; they want good schools and food for their children, dignified hospitals to take care of the sick; they want to be respected; they demand transparent governance which does not confuse private and public interests; and above all they desire peace and justice».

Benin is an examplar country. Cardinal Bernardin Gantin is considered one of the father of the country – to him is dedicated the airport of Cotonou. And Catholicism had great part in the development of Benin, The former Archbishop of Cotonou, Isidore de Sousa, received special permission from the John Paul II to act as the effective leader of the country in the early 1990s, leading it through a transition from Marxism to democracy. Relationships between the Catholic Church and the State of Benin are wonderful, missionaries and Christian institutions make an appreciated job in the country. The 42,8 per cent of population of Benin is Christian, and the 27,1 per cent of these is Catholic. The rest is made up of faithful of other Confessions, mainly originated by the Lutheran reform. The 24,4 per cent of population is Muslim, and the rest of population belongs to ancient African creeds.

And all the representatives of those religions were sitting in front of Benedict XVI, together with the representatives of government and institution on November, 19th. The Pope contrasts the hope to the paradigm of the expert – who imposes his conclusions and proposes, at the end of the day, few useful solutions – and to the temptation to analyze the realities of Africa like a curious ethnologist or like someone who sees the vast resources only in terms of energy, minerals, agriculture and humanity («reductionist and disrespectful points of view which lead to the unhelpful “objectification” of Africa and her inhabitants»).

Hope is the key to understand two African realities. The first one deals with the sociopolitical and economical situation. The Pope says: «Human beings aspire to liberty; then to live in dignity; they want good schools and food for their children, dignified hospitals to take care of the sick; they want to be respected; they demand transparent governance which does not confuse private and public interests; and above all they desire peace and justice. At this time, there are too many scandals and injustices, too much corruption and greed, too many errors and lies, too much violence which leads to misery and to death ». It is not a ill that affect just Africa: it affects all the world. And people want to understand, they do not want to be manipulated. No policy is absolutely right and no economical policy is neutral. But both policy and economy – the Pope admonishes – has to be done for the common good.

That is why Benedict repeatedly cried out in defense of the poor. During an open-air Mass on sunday in a soccer stadium in Benin’s capital, before some 40,000 wildly enthusiastic, dancing and singing locals, he said «Jesus wanted to identify himself with the poor» and the poor deserve respect because «through them, God shows us the way to Heaven». And in the Africae Munus Benedict called the church to act as a «sentinel», denouncing situations of injustice. The pontiff also took yet another swipe at neo-con ideologies. In his opening speech of the trip, he warned Africans that an «unconditional surrender to the laws of the market and of finance» is among the pathologies of modernity they would do well to avoid.

The second reality deals with the interreligious dialogue. How many wars had been fought in the name of God? «True interreligious dialogue – the Pope said – rejects humanly self-centered truth, because the one and only truth is in God. God is Truth. Hence, no religion, and no culture may justify appeal or recourse to intolerance and violence. Aggression is an outmoded relational form which appeals to superficial and ignoble instincts. To use the revealed word, the Sacred Scriptures or the name of God to justify our interests, our easy and convenient policies or our violence, is a very grave fault».

The challenge for Africa – outlined in the post-synodal exhortation – is to free Africa from his ills. First of all, Aids, to face by providing «everyone with access to treatments and medicines, taking account of uncertain situations! The Church, indeed, has been pleading for a long time for high quality medical treatment to be made available at minimum cost to all concern ». And then, illiteracy that «represents one of the principal obstacles to development. It is a scourge on a par with that of the pandemics. True, it does not kill directly, but it contributes actively to the marginalization of the person – which is a form of social death – and it blocks access to knowledge». More: «Africa’s memory is painfully scarred as a result of fratricidal conflicts between ethnic groups, the slave trade and colonization. Today too, the continent has to cope with rivalries and with new forms of enslavement and colonization». And also the intolerable treatment to which so many children in Africa are subjected: child soldiers, child prisoners, children forced into labour, children ill-treated on account of physical or mental handicap, children said to be witches or warlocks, children said to be serpents, children sold as sex slaves, traumatized children without any future prospects.

Was it a sort of Benedict XVI’s opening to theology of liberation? There is – obviously – some more in depth reason. Leaving Benin, the Pope asked: «Why should an African country not show the rest of the world the path to be taken towards living an authentic fraternity in justice, based on the greatness of the family and of labour? May Africans be able to experience reconciliation in peace and justice!» In a few years, Africa can become the most Catholic continent in the world. The Pope bets on the awakening of Africa, because it is in that awakening that resides the awakening of the Church. The Church that must push for Truth, Reconciliation, Dialogue, Care for Human Being. And Africa – with its Truth and Reconciliation commissions, with its experience of interreligious dialogue because of the cohabitation of several creeds, with his traditional care for human being – can indicate the path to follow to all the world. Africa is a continent of hope. Even for Christianity. Now more than ever.