Vatican puzzle. How the Roman Curia is going to change. Benedict XVI to heal the Church. With Eucharist.

Brazil, the challenge of evangelization 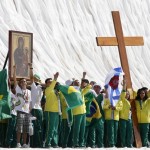 The next 18th of September, the Cross of the World Youth Day will be in Sao Paulo, Brazil. For the occasion, there will be a big festival: the preparation for the next World Youth Day (scheduled in Rio de Janeiro, in 2013) will officially begin. There will be big attention for the World Youth Day in Brazil. Brazil is the most Catholic country in the world, with 145 million baptized people – the 79 per cent of the population. Wyd is also more significant in a country which lives the faith so strongly to become contradictory. On one side, the Liberation Theology, which is the main topic of a neverending debate in Brazil: nevertheless an increasing growth rate reached during the Lula administration (and Lula trained up with Liberation Theology), poverty is still a dramatic issue to face Brazil. On the other side, the increasing of the adherent to Christian Pentecostal Sects – John Paul II talked about them as  «fierce wolves» to underline their aggressive proselitism – is continuous. Nowadays, the Christian sects can count on 22 million followers. In 1991, they had just 13 million followers, the 10 per cent of Brazilian population.

Evangelization is the main topic for Brazil. Benedict XVI made of evangelization a key point of his trip to Brazil in 2007. He was the one who chose, for July 7, 2005, the theme of the fifth general conference of the bishops of Latin America and the Caribbean: «Disciples and missionaries of Jesus Christ». It was he who wanted that the other phrase of the title – «That all may have life» – should end by specifying: «in Him». And that the statement of Jesus himself should be added: «I am the way, the truth, and the life». Even the 2013 Wyd theme deals with the mission of evanelization: «Go and Make Disciples of All Nations».  The Pope himself underlined – during the homily in the Holy Missal in Sao Paulo in 2007 – the need for a new evangelization. For Benedict XVI, a strong effort of evangelization is the real response to the attacks against the family, to the crimes against life, to the abandoning of Catholicism in favor of the new “evangelical” and Pentecostal sects. And priestly celibacy also weakens when «the structure of total consecration to God begins to lose its deepest meaning». And the poor must also be offered «the divine balm of the faith, without overlooking material bread».

The Papal words had been considered a provocation by many in Brazil. Liberation  Theology made of the poor the measure of all things and of the image of a revolutionary Jesus an example, Benedict XVI statements divide the families. For example, they have divided the brothers Clodovis and Leonardo Boff. Clodovis Boff is a member of the Servants of Mary, Leonardo Boff –  banned from teaching in Catholic theology faculties in a 1985 sentence from the congregation for the doctrine of the faith – left the Franciscan order and got married. He was one of the fathers of Liberation Theology, and recently he changed his point of view: the poor is still the center of his predication; but the poor is not intended to be the man, but the earth, and the measure of all thing is the ecology: taking care of the earth is taking care of the man.

By changing his point of view, Leonardo Boff got closer to the Pope: the attention for  the evironment and the ecology was such a key point in Benedict XVI’s pontificate that he was described as the «Green Pope» in the Us Secreatary of State dispatches leaked by Wikileaks, and that he was ranked 17th among the ‘top 100 global thinkers’ of 2009 for having «positioned the church prominently and unexpectedly as an advocate for the environment and warned against the perils of climate change». In fact, Benedict XVI view goes beyond. And Clodovis Boff goes beyond as well. His “conversion” was finally expressed in the essay published in the Revista Eclesiástica Brasileira. In Clodovis Boff judgment, the «fatal» error into which it falls is that of setting up the poor as the «first operative principle of theology», substituting them for God and Jesus Christ.
«The ‘pastoral action of liberation’  - Clodovis Boff wrote – becomes one of the many branches of the ‘popular movement’. The Church becomes like an NGO, and so also loses substance physically: it loses workers, militants, and faithful». Clodovis Boff seemed to have centered the key point, since this is probably the reason why a shortsighted vision of Liberation Theology is brought on from the so-called “secular world”, who committed in a struggle to make the Holy See an organization on a par with any Ngo, with no diplomatic weight.

Leonardo Boff replied to his brother essay by claiming that «Clodovis has passed over body and soul to maintaining with naive optimism and youthful enthusiasm» the approach dictated by the Latin American bishops at their continental conference held in Aparecida, Brazil, in May of 2007, and inaugurated by Benedict XVI in person”. Leonardo’s reply was publish on the Institute Humanitas Unisinos website. It is the same Institute that scheduled for October 8-11, 2012 a big congress on the Liberation Theology. Among the special guests, there should be Leonardo Boff. But none of the speakers still confirmed his participation. The news was nevertheless spread to a great audience, by claiming a counter position between the 2013 Wyd and the 2012 congress. The Christian Base Communities repeatedly accused Benedict XVI – as former prefect of the Congregation for the Doctrine of the Faith – to have been the biggest censor of Liberation Theology. Just a few remember that there had been two notes of the Congregation of the Doctrine of the Faith about the Liberation Theology: the Libertatis Nuntius (1984) and the Libertatis Conscientia (1986). The first one can be considered the pars destruens  of a dialectic process, intended to purify Liberation Theology by its Marxist-oriented excesses; the second one can instead be considered the pars construens , in order to enhance the positive part of Liberation Theology. That is why the cardinal Oscar Andrés Rodriguez Maradiaga explains the reasons of the two notes in his Liberation Theology classes. Rodriguez Maradiaga links the notes of the Congretion for the Doctrine of the Faith to the Social Doctrine of the Chuch, which he defines «the best kept secret» of the Catholic world.

The key is the way one describes Jesus. The Jesuit University of Valle del Rio dos Sinos (40,000 students) is a prestigious center of cultural diffusion for all of South America and has recently launched a series of seminars to analyze the globalization project – developed from the beginning by the Society of Jesus – and its repercussions over the centuries, up to the present time. The aim, in particular, is to focus the action and the participation of the religious order on the formation and dissemination of modern culture and its spiritual and cultural role in Brazil and Latin America, through the missionary apostolate and educational efforts. During the last General Congregation of the Society of Jesus – that brought to the election of fr. Adolfo Nicolas as Superior General of the Jesuit – the Vatican admonished the Jesuit to harmonize their position with the ones of the Apostolic See, in the name of the peculiar vote of obedience  to the Pope observed by the members of the Society.

In the last years, four Jesuit theologians had been banned by the Congregation for the Doctrine of the faith: Jacques Dupuis in 2001, Roger Haight in 2004, Jon Sobrino in 2006 and Peter C. Phan in 2007. The key point was always the Jesus quest. Jesus is subjected to the canons of comprehension of secular culture. Jesus is so exalted as a great man and a worker of justice, but his divinity is obscured. The opposite of the Jesus of Nazaret sketched on the two books that Joseph Ratzinger dedicated to the Jesus as the gospels outline him (the third one will be published at the beginning of the next year).

The Jesus true man and true God was one of the main points of the Doctrinal Note on some aspects of the Evangelization, delivered by the Congregation for the Doctrine of the Faith in 2007. The note had been in reserve for a number of years, and then delivered as the introduction states – because of the  «growing confusion» over the Church’s duty to proclaim Jesus to the world, also penetrated within missionary institutes.

Among the causes of this growing confusion, there is the conviction that proposing Christian truth to others is an attack on their freedom and, at the same time, a conception of the Kingdom of God that is not identified in the person of Jesus Christ, but in «a generic reality that overarches all the religious experiences or traditions, toward which these should incline as toward a universal and indistinct communion of all those who seek God».   Spreading the news of Jesus true God and True man is the challenge of the Wyd 2013. The post-Wyd Madrid has already begun.