Antonio Fazio’s case. Is Catholic finance under attack? Toward a Church Revolution. The last fires of the three empires

Christianity, is there a future after secularization? 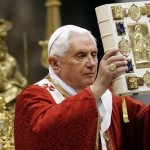 The new evangelization is the theme of this year’s meeting of the “Ratzinger Schulerkreis,” a group of the Pope’s former students.

The Ratzinger-Schülerkreis, that is the ‘Ratzinger Students’ Circle’, brings together once a year the old theology professor, now pope Benedict XVI, and his former students to discuss a new topic every year.

The first such meeting was held when Joseph Ratzinger was still a professor in Regensburg. Once he became archbishop of Munich, his students asked him to continue and he accepted. When he moved to Rome to take up the post of prefect of the Congregation for the Doctrine of the Faith the annual event continued. Typically, meetings were held at a monastery over a weekend. Now, the location is Castel Gandolfo, where the Pope is during the summer vacations.

New Evangelization is the main topic of Benedict XVI’s pontificate. The 31st of May Benedict XVI  addressed to the participants in the first plenary assembly of the Pontifical Council for promoting the new evangelization, asking them to «intensify the missionary action» and to be «genuinely credible». It was Benedict XVI line even in 2000, when he held a catechesis on new evangelization.

The new evangelization deals with the whole world, but it is particularly addressed to the post western Christianity. From its Jewish origins, Christianity, conquered the Pagan world and spread East to Iraq, India and China. Now, it is turning to its origins, being dominated by the people, cultures and countries of the South.

Western society, on the other hand, is on the path of an unprecedented secularization. The idea of God is excluded by the history, but this leads to the refusal that some people can believe in God, so bringing his belief in his everyday life.  It is a matter of religious freedom, still confused as a civil rights problem.

Just take a look at the Malta scenario. Benedict XVI went to Malta the last year. In Malta, Christianity had such an important role that – until now – the little island was the last country in the world where nor abortion, nor divorce were legal. Malta was, in this sense, the last catholic bastion in a highly secularized Europe. This bastion is now weaker, since a referendum promoted a law that allows divorce. The 54 per cent of population voted in favor of the divorce, nevertheless an aggressive campaign brought on by anti-divorce leagues. How long will the forbid to make an abortion now? Portugal – one of the last countries where abortion was not legalized –  approved a very few years ago the termination of pregnancy law.

What will be of Europe in the next 50 years? One should look at  Czech Republic – many say – to see the Europe of the future. The Prague Spring, and then the opposition to Communism, was lead by Catholic movements. But now – according to the last data – the 73 per cent of the Czech population proclaim itself as atheist.

But there are several signals that there is a a space for the resurgence of religious identity, or – at least – that something different, more religious oriented than before, is going on. David Cameron, British prime minister, began to criticize the multicultural model that characterized Great Britain. The 7th of July 2005 London terrorist attack  is still in the memory of British people. What impressed more was that the attack had been thought and brought on by second-generation sons of immigrated. «Under a State multiculturalism – Cameron said – we encouraged different cultures to live different lives, detached the one from the other and from the mai none. We had not been able to give a vision of society they aimed to belong to».

The new phenomenon of Spain (now also spread in Ireland, Greece and France) is the indignados march. An «ingenuous» movement – some observer said – born against the government’s hated Internet piracy legislation, furiously opposed by Spanish youth, who consider free downloads a cultural right, and become a general movement against the corrupt politicians. But there was something more behind the almost 20 thousand people that marched to Puerta del Sol in Madrid tweeting that the Square was «on the Cañada Real grazing paths; we have the right to sleep there»,  claiming protection under a thirteenth-century royal decree—still defended passionately by environmental groups—that protects the rights of shepherds to camp out with their flocks for three consecutive nights on the hundreds of ancient grazing routes that crisscross the country, even traversing major cities like Madrid. Nobody knows who were the indignados, since  most of them  appeared from nowhere: university-educated, intensely networked 20- to 30-year-olds, many still living with their parents, all acutely aware that post-bubble Spain has little or nothing to offer them as unemployment soars and precarious part-time employment becomes the norm. Even during the boom years, Spanish youth generally worked on short-term contracts with no benefits. The labels mileurista (1,000 euros a month) or ni-ni (neither work nor studies) summarized their humiliation. On Puerta del Sol, the political parties, even the communist-green Left Unity, whose program echoes theindignados’ demands, were absent. So were the big labor unions.

This general uneasiness played its role in the last elections held in Spain. The commitment of Zapatero to legalize gay marriages, in vitro fertilization and assisted hatching, common law marriage, and on the other hand the «war of chapels» brought on under its government – Zapatero was obviously not directly responsible for it, even if the war of chapels is seen as a direct consequence of his ideas – were damaging for Zapatero administration, accused from the people not to be able to take care of the economy. Zapatero administration, indeed, did not pass in vain, since many are now indifferent toward religion.

In Hungary, Christianity took its role back. The preamble of the new Constitution of Hungary refers to God and Christianity as “unifiyng elements” of the country. The political nation of Hungary is identified with the ethnic nation, so discrimating non magyar minorities that live in the country. The Constitution gives the right to vote to the Hungarians that live in the near countries, and this would create friction with Slovakia and Romania, where great Magyar minorities live.

The Costitution would eventually lead to the prohibition of abortion by law, by stating that «the life of the foetus may be protected since the moment it is conceived». More, the competences of Constitutional Court are restricted, since the Court cannot occupy of economics and social issues; the influence of the executive power on judiciary power is extended, so judiciary power is less independent than before.

The Constitution was outlined by the center-oriented Hungarian party Fidesz. Fidesz won the election in 2010 getting two third of the Parliament seats. Thanks to this overwhelming majority, Fidesz bypassed the opposition boycott to the Constitutional reform, as well as some little riots.This new charta, said Fidesz spokesman, will «complete the democratization power begun in 1989, when Communist regime in Hungary collapsed». The great majority of the Parliament voted for the new Constitution, but Jobbik, the extreme right party, and this is a signal that this is not a merely Christian-conservative constitution.

It is to notice that, while Hungarian Parliament turned to a Christian-oriented new Constitution, the Hungarian Episcopal Conference changed the name of the Commission Justice and Peace to Commission Caritas in veritate. By re-naming the commission, bishops say they wanted to homage the Papal encyclical. But the encyclical – written by several hands, and often mystified from the liberal-conservative wing (e.g. Michael Novak and all the branch of studies brought on by Acton Institute) that give a capitalistic oriented reading of the encyclical – is just a part of the Social Doctrine of the Church, and this renaming has been seen as a sort of weakening of the Social Doctrine of the Church. Caritas in veritate is also the name of a commission of European Episcopal Conference, and it is the name of a research area of Università Lateranense in Rome – the university of the Pope – sponsored by Acton Institute. Was the Hungarian Episcopal Conference choice a counter position to the new Constitutional chart? Vatican insiders just do not want to deny this kind of scenario.

What about Italy? Cardinal Camillo Ruini prophecy – the cardinal, former president of Italian Episcopal Conference, make this prophecy to a few friends – is that Italy itself is going to a sort of Zapatero-era, even if softer. There are several signals: Milan and Naples new mayors are respectively  an ex communist (but very grateful to the founder of Communion and Liberation don Luigi Giussani) and an ex magistrate that became an idol of anti-politics. The political indifference feed the religious indifference, while the parties that can count on a solid tradition do not have the strength to be in the public debate. In the mean time, religious indifference is taking all Europe as a disease.

That’s why there is the need for a new evangelization. The Pope itself wanted the Pontifical Council for Promoting the New Evangelization . Benedict XVI encouraged the members of the Pontifical Council to give a special contribution for the 13th synod of bishops, scheduled for October 2012 and dedicated to “New Evangelization and transmission of Christian Faith”. The question one can make is if there is a new evangelization without the Social Doctrine of the Church. Cardinal Rodriguez Maradiaga considers the Social Doctrine of the Church the «best kept secret in the world». So well kept that there is no trace of it in the motu proprio Ubicumque et semper that promulgates the new pontifical council for the New Evangelization.

«The current crisis – Benedict XVI said – brings with it traces of the exclusion of God from people’s lives, from a generalized indifference towards the Christian faith to an attempt to marginalize it from public life. In the past decades, it was still possible to find a general Christian sensibility which unified the common experience of entire generations raised in the shadow of the faith which had shaped culture. Today, unfortunately, we are witnessing a drama of fragmentation which no longer acknowledges a unifying reference point; moreover, it often occurs that people wish to belong to the Church, but they are strongly shaped by a vision of life which is in contrast with the faith».

This vision now can fail. Is now the time for a new true Christianity to come?

One Response to Christianity, is there a future after secularization?