Spain, is it a kind of religious war bullettin? Santo Subito! The use of a Papacy 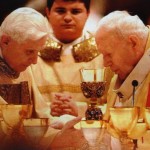 «For all the shame we feel over our failings, we must not forget that today too there are radiant examples of faith, people who give hope to the world through their faith and love. When Pope John Paul II is beatified on 1 May, we shall think of him, with hearts full of thankfulness, as a great witness to God and to Jesus Christ in our day, as a man filled with the Holy Spirit. Alongside him, we think of the many people he beatified and canonized, who give us the certainty that even today God’s promise and commission do not fall on deaf ears». It’s Holy Thursday. Benedict XVI is celebrating the Chrism Mass in the Vatican Basilica. During his homily, the Pope explains the meaning of the blessing of the three holy oils, which express «three essential dimensions of the Christian life». The oil of cathecumens express the search for God, which is intended to be neverending. The oil for anointing the sick  express the need to be penintent, because «to be sure, the Church’s principal task is to proclaim the Kingdom of God. But this very proclamation must be a process of healing». But «if our relationship with God is disturbed, if the fundamental orientation of our being is awry, we cannot truly be healed in body and soul». The chrism, finally, is the oil used for anointing priests and kings, in continuity with the great Old Testament traditions of anointing. It’s the oil of Christians: they should be a priestly people for the world and they instead fear to proclaim theirselves sons of God. «We have reason to cry out at this time to God: “Do not allow us to become a ‘non-people’! Make us recognize you again! Truly, you have anointed us with your love, you have poured out your Holy Spirit upon us. Grant that the power of your Spirit may become newly effective in us, so that we may bear joyful witness to your message!»

Then, Benedict XVI refers to his beloved predecessor. Wojtyla was not ashamed to proclaim himself son of God. He was not ashamed to announce the Gospel. Karol Wojytla’s holiness is truly all compelled in his being for God without being ashamed. “When I first meet somebody, I pray for him”, Karol Wojtyla said. He chose to be a priest because – after the death of his mother, brother and father – God is his family. He wear priestly cloths in a country (the Poland under communist rule) where only being priest is seen as suspicious. When he becomes Pope, he has no fear to proclaim the Gospel, notwithstanding a Pontificate is full of difficulties and controversial facts.

Many read, in Benedict XVI’s words, a sort of auto-absolution for the pedophilia scandal. But pedophilia of the clergy (and – in a wider perspective – the phenomenon of clerical abuses) is rooted more in-depth, according to the Pope. The problem is that the Christians are not a people of God anymore. Benedict XVI explained his point of view in a letter sent to the Church of Ireland  after the scandal of Irish Church reached Rome. In that letter, he asked to Irish and world Church to begin an auto-purification path. Wojtyla’s call upon cannot be considered an auto-absolution. It is something different. Wojtyla is indicated as an example of how being a person of God. Wojtyla’s holiness indicates the path to be Church again.

The debate for the 1st of May beatification never appeased. Many pointed the finger at the controversial issues of Wojtyla’s papacy: the I.O.R. scandal in the beginning of the 80s, the pedophilia of the clergy cover-up, Legionaries of Christ’s founder Marcial Maciel scandal, and so on. Many ride the wave of the Ratzinger icon opposed to his predecessor one. There are several common sentences: Ratzinger cleans up what became dirty under Wojtyla’s pontificate; Wojtyla was not very fond of managing the Church, Ratzinger is doing it. Ratzinger is a “Pope less brought to the media”, while Wojtyla was a Pope at ease on the stage of the world.

Ratzinger never abandoned the topic of Christ sign of contradiction. He made of it the pivot of his pontificate. He is in perfect continuity with his beloved predecessor. Several times, on the other hand, Wojtyla called him “the faithful friend”. They lived in symbiosis. Cardinal Tarcisio Bertone, now Secretary of State but formerly secretary of Congregation for the Doctrine of the Faith, discredits – in a book he just published to celebrate John Paul II Beatification, Un cuore grande (Libreria Editrice Vaticana) – the *black legend* about a conservative Joseph Ratzinger who wrote Dominus Jesus, the declaration on the unicitiy and salvific universality of Jesus Christ and the Church. Wojtyla himself wanted this declaration to be written – Bertone explained – in order to create no confusion among religion and no danger of religious syncretism. It’s the same line followed by Benedict XVI. That’s why the next meeting among religions for peace in Assisi is organized by Congregation for the Doctrine of the Faith, the Congregation for the Divine Cult and the Secretary of State.

Going on opposing John Paul II and Benedict XVI seems stupid. The top of the Church always changes, and new Popes will be elected. But everything is in the middle – the grey eminences – never change. Grey eminences move their pieces to one or to the other part to make their own game. Did the things really change? Actually, while time passes by, things simply are managed in a different way, and that’s the only visible change. Former centers of power need to stay apart, and act in the shadows. When a new Pope is elected, grey eminences need to decide if going in favor or against the new top. The Pope is always left alone in managing the Church, and is subjected to blackmail.

Just think about what happened in Regensburg in 2007. Benedict XVI’s speech on Islam was checked and not controlled from a Secretary of State made up of a brand new top (Cardinal Bertone) and of the rest of the office still faithful to the previous Secretary, cardinal Angelo Sodano. Nobody took care of the diplomatic repercussion. The speech aroused bitter controversy in the Islamic world. But the controversy brought to a letter by 138 Muslim personalities to the Pope. It was the first time in the Islamic world that such a diverse group of people was speaking with a single voice, and expounding the principles of Islam to the head of the most important Christian Church, with the intention of arriving at “mutual understanding.”

In September 2009, Il Giornale, an Italian newspaper owned by Berlusconi’s family, attacked Dino Boffo, director of Avvenire, the newspaper of the Italian Episcopal Conference, guilty of criticizing the moral behavior of the President of Council while being sentenced for harassment in the past. The source of the newspaper was a tissue came from a “person you should institutionally trust”, said Vittorio Feltri, at that time director of Il Giornale. It was the same tissue that for years passed from hand to hand at Istituto Toniolo, the “strongbox” of Catholic university – who raises great part of the funding for Catholic culture in Italy – since Dino Boffo had been nominated in its board.  It was the typical issue the Secretary of State hand for its internal dossiers. Many interpreted it as a signal, since Sodano was losing influence inside the I.O.R., the Vatican Bank, since the man he nominated as a prelate, mons. Piero Pioppo, was appointed nuncio to Cameroon and a new president had been nominated, Ettore Gotti Tedeschi.

Now, cardinal Sodano is presenting himself as the best ally of Joseph Ratzinger. As dean of the College of Cardinals, in the spite of the priestly pedophilia scandal the last year, during the Easter Mass, pronounced a speech in which defended Benedict XVI doings from what he called «idle chatter».

Right before the beatification, many Italian medias wrote about a letter by cardinal Sodano, in which he explained his decision not to testify for Wojtyla’s beatification. The same choice had been done from Cardinal Sandri, a faithful companion to cardinal Sodano. A few days before the beatification, it was asked to cardinal Angelo Amato, prefect of the Congregation for the Cause of the Saints, the reasons of this choice. He replied that the Positio contains the testimony of both the cardinals. Why are there these two differing reports?

This is just an example, one of the hidden signs of continuity between John Paul II and Benedict XVI pontificates. Many tell that several grey eminences (cardinals, bishops and so on) still meets – almost once a month – with their faithful companions. They still manage the power. But the lot of guiding the Church fell to Benedict XVI.