Santo Subito! The use of a Papacy 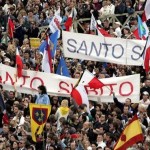 «Now the longed-for day has come; it came quickly because this is what was pleasing to the Lord: John Paul II is blessed!» Benedict XVI underlines these latter words, moved from a deep emotion. Not all Popes reach the goal to beatify their predecessor. Moreover, not all Popes are able to beatify a friend.

John Paul II is now blessed, despite many books that – even recently, capitalize on the imminent beatification – contested his saintliness. Everybody raked up the shadows and the contradiction of a 27 years long Pontificate: I.O.R. scandal, the bishop covers to clerical sex abuses, the double life of Marcial Maciel, founder of Legionaries of Christ. The pontificate had many shadows thickening  to  the loud popular shouting of the people in Saint Peter’s square during John Paul II’s  funeral that he should be made a saint..

«Yes, I can personally testify the saintliness of this Pope. Often, after an audience with John Paul II, I had  the impression inside me that Heaven opened up. I found myself as directly linked to God, in a very dense union with Him, with no intermediaries. It was as though I were directly linked to God, in a very deep union with Him, with no intermediaries. The Pope is a mediator, but as soon as he links you with God, he disappears. It seemed to me that I could understand in a deeper way what the charism of the Pope is. The keys that Jesus gave to Saint Peter are not only useful to wash our sins away: they can also open Heaven to us, opening ourselves in turn to union with God». This how Chiara Lubich, founder of Focolari movement, spoke about John Paul II. She often did so. It was so natural  for the adherentsto Focolare Movement who were preparing to attend John Paul I’s funeral to make the posters they showed in Saint Peter’s square proclaiming : «Santo subito», «Saint now!».

The John Paul II saintly reputation was promoted from Roman Curia a little after John Paul II’s death. Angelo Sodano, at the time cardinal Secretary of State, called him «John Paul II the Great» in the homily pronounced during the first mass after his death. Suddenly,everyone adhered to the huge popular emotion. More than one hundred head of State had to assist the funerals, and cardinals and cardinals who originally had not been  so sympathetic towards the «Polish» Wojtyla spoke about him only in a positive way.

It was long time before that someone decided that everyone should speak about John Paul II in positive way. Just by taking a look to media reports, one can divide Wojtyla’s pontificate in two key moments: until 1989, every single media (with some obvious exception) criticized a pontificate that – they reported – was a step back to the Council, attacked the waste of the continuing international trips, did not lose any useful occasion to complain about the Church. Then, the Wall of Berlin fell down. And John Paul II was erected as an Anti-communist bastion, as a new icon of a world that lacked a consuming ideological war, and that needed a new one. From then after, all of the medias hailed John Paul II. In 2000, the Pope asked for forgiveness for the faults of the Church. He did not ask forgiveness for clerical sex abuses, but no one noticed it. When the paedophilia scandal broke out and the Pope wrote the letter De delictis Gravioribus, even he who now attack that document at that time wrote that it was the beginning of a new transparency era.

After Wojtyla trasparency, many hid the fact that they were not so transparent. After the people of God claim for an immediate canonization, cardinals assessed what to do. Jozef Tomko, one of them, a very good friend of Wojtyla who had  made Tomko  a cardinal thanks to this friendship, put on the table a request for the to-be-elected-Pope to proclaim saint for acclamation the late pontiff. The cardinals who went in procession to sign that document were a great majority of the Sacred College, according to what media reported. In that document, many saw their own warranty to remain unpunished. A fast canonization could also move the historical judgment on the Papacy 50 years forward. Many things could had been covered, many fixed. That was the reason why it was important to follow the popular will.

Focolarinis, all the ecclesiastic movements, common people were betrayed, because their claim of love for John Paul II was toward a man, not a Pope. Journalists – accused in the past to have been directly inspired from Stanislaw Dziwisz, the powerful secretary of John Paul II – brought to light the first miracle obtained thanks the presumed intercession of the Pope. At the same time, other newspapers  preached to be prudent.

Benedict XVI had been for more than 20 years prefect of the Congregation of the Doctrine of the Faith. He knew what of rotten was inside the church. He fought against the rotten on Wojtyla’s side. He knew that – sometimes – some choices are decided by circumstances more than by conscience. He knew that people was talking about a man who was a saint, and not about the saintliness of a pontificate. He decided to follow the rules, and it was the most logic thing to do: he did not canonize Wojtyla coram populi, but just dispensed from the need of waiting five years after the death of the candidate to start beatification procedure. No breakdown to the pressure for a quick canonization, but a regular procedure, as the Pope himself underlined in the homily he held during the beatification mass.

That’s the moment when the ones that praised Wojtyla’s saintliness become the ones that let understand not to have testified in favor of the beatification. Cardinal Angelo Sodano – who was accused in the last year for covering up the founder of Legionaries of Christ Marcial Maciel’s double life – and cardinal Leonardo Sandri – the one who announced to the people in Saint Peter Square John Paul II’s death – let understand to some Vatican reporter that they wrote a letter in the one they underline that John Paul II’s beatification process is going on too quickly. No word on Wojtyla saintliness, just a matter of opportunity, since other Popes – as for example Pius XII – are still waiting to be beatified. Two Italian newspapers publish this pieace of news. But they have to square thing up with an obstinate reporter. In a public meeting, this latter asks cardinal Angelo Amato, prefect for the Congregation of the Cause of the Saints, how can be interpreted the absence of Sodano’s and Sandri’s testimonies. Card. Amato answers twice that both the testimonies are included in the Positio for the beatification process. Who gave the news grasp at straws.  It all seems a subtle game to ease someone’s conscience.

John Paul II is finally blessed. In the mean time, many make the late pontiff an instrument of a strange debate, opposing him to Benedict XVI, not remembering that they are accusing Benedict XVI of the same things they accused John Paul II during the first years of his pontificate.

One Response to Santo Subito! The use of a Papacy