Libya, what future for Christian community? Palestinian question. The interest of the Holy See.

The Pope in Assisi. Aiming at the Year of Faith. And – maybe – a new encyclical. 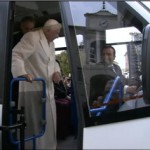 Purify the faith. Benedict XVI went to Assisi – 25 years after the first meeting of world religious leaders in the town of Saint Francis – for a day of reflection, dialogue and prayer for peace and justice in the world Pilgrims of Justice, Pilgrims of peace. And – during his speech – he talked about people that is not believer, but is even not non-believer. «Such people  - the Pope said – do not simply assert: “There is no God”. They suffer from his absence and yet are inwardly making their way towards him, inasmuch as they seek truth and goodness. They are “pilgrims of truth, pilgrims of peace”. They ask questions of both sides». On one side, «they take away from militant atheists the false certainty by which these claim to know that there is no God and they invite them to leave polemics aside and to become seekers who do not give up hope in the existence of truth and in the possibility and necessity of living by it». On the other side, they «challenge the followers of religions not to consider God as their own property, as if he belonged to them, in such a way that they feel vindicated in using force against others».

The Pope concluded: «Their inability to find God is partly the responsibility of believers with a limited or even falsified image of God. So all their struggling and questioning is in part an appeal to believers to purify their faith, so that God, the true God, becomes accessible».

To celebrate the 25th anniversay of the first meeting of Assisi – where he did not go – , Benedict XVI invited once again the delegates of the world religions in the town of the poverello di Assisi. The Pope strongly wanted to commemorate the first meeting in Assisi, but at the same time he did not want that the event would be characterized by religious syncretism.

These worries the Pope explained on March 4, 2011 in a letter to Lutheran pastor Peter Beyerhaus, a longtime friend who had told him about his fears over the new convocation of the day of Assisi. «I understand very well – the Pope wrote – your concern about participating in the encounter of Assisi. But this commemoration would have been celebrated in any case, and, in the end, it seemed to me the best thing to go there personally, in order to try to determine the overall direction. Nonetheless, I will do everything I can to make a syncretistic or relativistic interpretation of the event impossible, and to make it clear that I will always believe and confess what I had called the Church’s attention to with Dominus Iesus».

October, 27 1986. Tv stations all over the world broadcast the images of the event that the pope had so strongly desired: pilgrimage, fasting, prayer, peace among peoples and religions. John Paul II even revived a medieval tradition by invoking on that day a «divine truce». The images of the pope praying with the heads of so many different religions established itself as one of the most powerful signs of his entire pontificate.

But at the same time, critical reservations about the event were taking shape. The event in Assisi added fuel to the fire through some of its more excessive gestures. Some of the city’s churches were allotted for the prayers of Buddhists, Hindus, and African animists, as if these buildings were neutral containers, void of any indelible Christian value. The Buddhists set up a shrine of Buddha on the altar of the local Church of Saint Peter. It did not happen the last 27th of October, when each religion had a personal space to pray and reflect according to its religious thoughts.

The path to Dominus Iesus begins in Assisi and passes through an encyclical, the Redemptoris Missio, released in 1990. Beginning from the affirmation of the Second Vatican Council in the decree Nostra Aetate, according to which «the Catholic Church rejects nothing of what is true and holy in other religions», the period after the council saw the widespread approval of the idea of transforming the missions into a simple commitment to foster the maturation of the «seeds of truth» present in the various religions, as if these seeds were themselves distinct ways of salvation. Redemptoris Missio decisively contrasts this «indifferent mentality, unfortunately widely diffused among Christians as well, which is rooted in incorrect theological views marked by a religious relativism that leads to the conviction that one religion is as good as another» . The encyclical reaffirms the necessity and urgency of proclaiming the Good News of Jesus. This means an explicit proclamation. It means a proclamation made in the certainty that no other religion can save anyone apart from Christ, the only «way, truth, and life».

Dominus Iesus is released during the Holy Year of 2000. The inauguration of the Jubilee refocused some of the critics, since the ceremony of the opening of the holy door was  vaguely interreligious. But the Pope was in no frame of mind for peaceable concessions, as demonstrated by the strong gestures with which he opened the Jubilee year: from the “mea culpa” for the sins of Christians in the past, to the remembrance of the martyrs of yesterday and today, to the solemn reaffirmation of the doctrine according to which «Jesus Christ, and no one else, can give us salvation».

Dominus Iesus  is not presented as an organic treatment of the relationship between the Christian faith and other religions. It limits itself to defining the errors to be corrected and to repeating the essential truth. One of its central passages reads: «The thesis that the revelation of Jesus Christ is of a limited, incomplete, and imperfect character, and must be completed by the revelation present in other religions, is contrary to the faith of the Church….This position radically contradicts the affirmations of faith according to which the full and complete revelation of the salvific mystery of God is given in Jesus Christ».

In Dominus Iesus there many citations from the documents of the Second Vatican Council. But, as soon as it was published, it was met with criticism, both from within and from outside the Church. It was rejected by leaders of other Christian confessions and other religions. There were protests from defenders of secularism, tolerance, ecumenism, and dialogue.

In the mean time, there had been a second meeting among the religious leaders in Assisi, in 1993, during the Balkan war. And then, there had been September 11 and the call for a third meeting, in 2002. But the quest for a new Assisi was shaking the Catholic world long before. Cardinal Ruini had been asked about the problem on December, 10 2001, during the presentation of his last book. “It is an important question – he answered – How to make explicit the consensus to religious freedom presumed as implicit among they who accept to pray together? How to remark the differences between the interreligious prayer of 1986 and the one of today? But it is easier for us to answer that question, since now there is something new in the Western Culture. Something that had been absent and that now is strongly emerging. This novelty is the effort to feel and assert our Christian identity. This novelty has been felt from lay culture as a need not only of the Church, but of all the Western civilization».

Is this novelty still undimished today? «This meeting is less charismatic of the one held 25 years ago, but at the same time we are now saying thing that 25 years ago nobody would tell», one of the “dialogue professionals”  said the last 27th of October. Many things were similar to the event of 1986, beginning from the weather – humid and cold in the morning, seemingly about to rain. But in 1986, a graffiti appeared on the wall of the palace of the Bishop’s curia in the early morning. There is no document to prove it, since mons. Vittorio Peri – the priest that discovered the graffiti – was not so prompt to take a picture of it before letting cancel the graffiti. The priest was mons. Vittorio Peri, now Vicar in Assisi and in 1986 “right hand man” of cardinal Roger Etchegaray, then president of the Pontifical Council for Justice and Peace. The graffiti sentence read: «Wojtyla, not with prayers, but with weapons we defend peace».

The delegates of the World religions speaks before Benedict XVI. Then, the Pope held his speech. He began from the first meeting of Assisi. «At that time – he said – the great threat to world peace came from the division of the earth into two mutually opposed blocs. A conspicuous symbol of this division was the Berlin Wall which traced the border between two worlds right through the heart of the city. In 1989, three years after Assisi, the wall came down, without bloodshed. Suddenly the vast arsenals that stood behind the wall were no longer significant. They had lost their terror. The peoples’ will to freedom was stronger than the arsenals of violence». But – he added – «the world of freedom has proved to be largely directionless, and not a few have misinterpreted freedom as somehow including freedom for violence».

The Pope outlined the new faces of violence. The terrorism, that «is often religiously motivated» – and «in that case religion does not serve peace, but is used as justification for violence». The Pope acknowledged «with great shame» that «yes, it is true, in the course of history, force has also been used in the name of the Christian faith».

Another face of the violence is the one that comes from the absence or negation of God. «The denial of God – the Pope said – has led to much cruelty and to a degree of violence that knows no bounds, which only becomes possible when man no longer recognizes any criterion or any judge above himself, now having only himself to take as a criterion. The horrors of the concentration camps reveal with utter clarity the consequences of God’s absence». Benedict XVI did not only speak about the State-imposed atheism, but he underlined that the «worship of mammon, possessions and power is proving to be a counter-religion, in which it is no longer man who counts but only personal advantage». This is the environment that leads to consider the violence a state of normality. «The absence of God leads to the decline of man and of humanity».

The words of Benedict XVI in Assisi are the perfect sequel of what he said during his last trip to Germany. The program of the Pope is now fair: purify the Faith, make the Church less worldy. And prepare the Church to a new Evangelization – it will be the topic of the next synod of bishops, in 2012 – and to renovate the Faith. The 2012 – it has been officially announced with the release of the motu proprio Porta Fidei – will be the year of Faith. Waiting for the next Papal encyclical. After the first one on Charity and second one on Hope, the next one will be be on  Faith.

2 Responses to The Pope in Assisi. Aiming at the Year of Faith. And – maybe – a new encyclical.