The Holy See charged of crimes against humanity remains silent. Here is why. Unchain the Church. The program that Benedict XVI reinforced in Germany.

Turning back to God. The gift of Benedict XVI to the Church of Germany. And to all the Church. 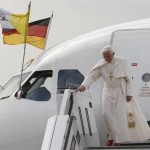 «Turn back to God» Benedict XVI’s appeal was not only addressed to the Church of Germany. It is a general appeal to Europe, to the several religious confessions, to the world. This appeal strongly echoed during the visit of Benedict XVI to his homeland, and it has been linked with two other key-topics: the risk of a new Nazism, given by the individualism that may lead to the Pagan cult of personality” and that does not allow to recognize the presence of God or at least the pre-conditions of the common living (according to Jurgen Habermas, that debated of this with Joseph Ratzinger); and the risk of a world rich in wealth, but poor in humanity.

Benedict XVI landed the last Thursday in a Germany that seems to live a profound crisis of identity. «More than a crisis – Thomas Blanck, student, says – I would talk about a certain indifference of the young people toward public life. The old parties does not answer to the needs of young people. On the other hand, young people is not looking for new parties to come». That is the reason why that PiratPartei, the Pirate Party, gained the 9 per cent to the last local elections in Berlin. Pirate Party is a young party – he was founded in 2006 in Sweden – , that is now structuring itself. «Now it is time to make the work – Sebastian Nerz, leader of the German PiratPartei – people voted us because they felt close to some of our issues. Our program deals with the copyright and way it is brought on – we think it is against human rights, and it suffices to analyze the security laws approved after 9/11 to see it. Seeing it from a wider perspective, we think the State should have less influence on private life of people».

Is the ekectoral growth of Pirat Partei the sign of an always more individualist Berlin? The last big mass movement was the one that brought people to let the Wall fall. «But after the reunification – Thomas Blanck explains – people had also been very disappointed. The Chancellor Helmut Kohl told that the differences between East and West would level within a maximum of ten years. It was not so.». But it is also the life of a Berlin that still look for God, nevertheless the melting pot of cultures. «There is, here in Berlin – Kathy Schulz, a German that lived in Italy, says – the Karneval der Kulturen, the Carnival of Cultures, and during that Carnival nobody feels to be in Germany, but it seems to be in the different countries this multicultural city represents. But, when everything ends, one can still find strong differences between the West and East part of Berlin. In the East, that was ruled by an atheistic regime, there is no believing in God. But they celebrate the Jugendweihe, a civil rite which replace our confirmation».

It is peculiarly felt in Berlin – and it is anyway felt toward all of Germany – the distinction and difference between East and West. Ossi (inhabitant of East Berlin) and Wessi (inhabitant of West Berlin) are still not metaphysical terms for a country that founded great part of its identity of today on the post-Nazi regime. «I will be provocatory – Thomas Blanck says – but I think that it is on Auschwitz that German people build up their collective memory». Nazism is very often quoted in the speech of politician, as to admonish not to let that dark period of the story be back in Germany.

Even Benedict XVI constantly in his speeches constantly referred to the Nazi Regime. The Pope quoted a Saint Augustine’s sentence during the speech he held in Bundestag: «Without justice – what else is the State but a great band of robbers?». And he then explained: «We Germans know from our own experience that these words are no empty spectre. We have seen how power became divorced from right, how power opposed right and crushed it, so that the State became an instrument for destroying right – a highly organized band of robbers, capable of threatening the whole world and driving it to the edge of the abyss».

It suffices reading the Joseph Ratzinger’s autobiography to understand that he was subjected to, more than lived, the Nazi regime. The young Joseph Ratzinger saw Nazi regime through his father’s critical eye. As a soldier, his father was not able to accept the political arrest of priests, and he helped the one he could. Stil very few people remember that one of the first concentration camps in Germany was the Theresienstadt one in Berlin, where priest, gay, handicapped people and gipsy were imprisoned.

But Benedetict XVI did not forget about the other dictatorship the German People experimented: the Commonism. «Here in Thuringia – Ratzinger said during his homily at the Holy Mass in Erfurt – and in the former German Democratic Republic, you have had to endure first a brown and then a red dictatorship, which acted on the Christian faith like acid rain.  Many late consequences of that period are still having to be worked through, above all in the intellectual and religious fields.  Most people in this country since that time have spent their lives far removed from faith in Christ and from the communion of the Church.  Yet the last two decades have also brought good experiences: a broader horizon, an exchange that reaches beyond borders, a faithful confidence that God does not abandon us and that he leads us along new paths».

Turning back to God is a need for Benedict XVI. He met the representants of Zdk, the Central Committee of German Catholics, and told them about the exposure programmes. Within these programmes, a team of expert goes to a poor country to learn how to concretely help poor people. «Let us imagine – Benedict XVI then said – that an exposure programme of this kind were to take place here in Germany.  Experts from a far country would arrive to spend a week with an average German family.  They would find much to admire here, for example the prosperity, the order and the efficiency.  But looking on with unprejudiced eyes, they would also see plenty of poverty: poverty in human relations and poverty in the religious sphere».

Turning back to God. Benedict XVI – since the beginning of his visit – that he had «come to talk about God». He reasserted it during the meeting with the several religious confessions: he wished the full unity with the orthodoxes, he invited Muslims to Assisi and to bring on an alliance based on the great principle of life, he said to Jewish that «without God, the respect for the man misses». Everybody looked at the meeting with the Evangelic Church of Germany, in a land where Catholics and Lutherans are equivalent in number of faithful. Two years ago, in a sort of unprecedented alliance, Evangelicals and Catholics campaigned signed by signed to gain the victory in a referendum to let the religion remain a teaching subject in school, and not just a facultative subject to learn in the afternoon courses. Actually, there are still theological problems. «I do not foresse a full unity of Evangelicals and Catholics – Jens Schroeter, professor of New Testamentary Theology at Humboldt University in Berlin, says – but I see that there is something moving from the basis communities: there several catholics that are getting closer to Protestants. Theological discussion is obviously still alive, but common people live really more closer than what we can think». Are the Kulturkampf times – the cultural battle against Catholicism brought on by Chancellor Bismarck «for freedom and not to let an interference of religion in public life» – come to an end?

Benedict XVI praises the providentiality of secularizing trends. During the meeting with the Catholics committed in the Church and in the Society, the Pope affirmed that « secularizing trends – whether by expropriation of Church goods, or elimination of privileges or the like – have always meant a profound liberation of the Church from forms of worldliness, for in the process she has set aside her worldly wealth and has once again completely embraced her worldly poverty. In this the Church has shared the destiny of the tribe of Levi, which according to the Old Testament account was the only tribe in Israel with no ancestral land of its own, taking as its portion only God himself, his word and his signs. At those moments in history, the Church shared with that tribe the demands of a poverty that was open to the world, in order to be released from her material ties: and in this way her missionary activity regained credibility».

Is the credibility the answer to the subtle kulturkampf moved not only against Catholic religion, but against all the religions? Benedict XVI spoke severely about the Church of Germany: «Behind the structures, is there also a corresponding spiritual strength, the strength of faith in the living God?  We must honestly admit that we have more than enough by way of structure but not enough by way of Spirit.  I would add: the real crisis facing the Church in the western world is a crisis of faith.  If we do not find a way of genuinely renewing our faith, all structural reform will remain ineffective».

Turning back to God. This is what the Pope underlined also during the important ecumenical celebration with the Evangelical Church of Germany. Everybody was waiting for the revoke of the excommunication of Martin Luther, or at least some opening on the Holy Communion to the mixed couple. Benedict XVI caught everybody off guard.  «Prior to my visit – he said during the ecumenical celebration – there was some talk of an “ecumenical gift” which was expected from such a visit.  There is no need for me to specify the gifts mentioned in this context.  Here I would only say that, in most of its manifestions, this reflects a political misreading of faith and of ecumenism.  In general, when a Head of State visits a friendly country, contacts between the various parties take place beforehand to arrange one or more agreements between the two states: by weighing respective benefits and drawbacks a compromise is reached which in the end appears beneficial for both parties, so that a treaty can then be signed.  But the faith of Christians does not rest on such a weighing of benefits and drawbacks.  A self-made faith is worthless.  Faith is not something we work out intellectually and negotiate between us.  It is the foundation for our lives.  Unity grows not by the weighing of benefits and drawbacks but only by entering ever more deeply into the faith in our thoughts and in our lives». The true gift is turning back to God.

3 Responses to Turning back to God. The gift of Benedict XVI to the Church of Germany. And to all the Church.