The Green Pope, from Genesis to Kyoto Life of Jesus, life of Benedict

Benedict XVI. The last of Benedictins, the first of Thomists 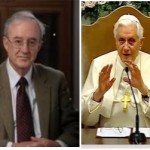 Aquinas is the title of a book by John Finnis, one of the most prominent legal philosophers. It is – obviously – dedicated to Thomas Aquinas. And it – less obviously – indicates the Aquinas as one of the founder of the Modern Thought. This book let John Finnis win the Thomas Aquinas International Prize, conferred by Circolo San Tommaso d’Aquino «for outstanding achievements in the fields of art and culture».

John Finnis followed a peculiar path during his life: born in an Anglican family, he has been atheist, then embraced a theistic vision and finally discovered Catholic faith. He followed this path by being the pupil of H.L.A. Hart, considered one of the «fathers» of Modern Anglo- Saxon jurisprudence. According to Hart view, there must not be no moral opinion implied in legislative activity. According to John Finnis «the thing about moral status is, if you believe in morality, at all, that is not a matter of choice or grant of convention, but of recognition. The very idea of human rights and status is of someone who matters wheter we like it or not, and even when no one is thinking about them; and matters, wheter we like it or not, as at bottom an equal, because like us in nature as substantial kind of being».

It is the same approach the Holy See follows in all of its activities under this Pope. Benedict XVI focused in several speeches on natural law, and he outlined  the «basis» of this attention in his three catechesis dedicated to Thomas Aquinas. It’s the try to overcome the clash between faith and reason. The method is Saint Thomas’ one. Unify, not divide. Thinking and dialoguing, not clashing. That’s the Benedict XVI recipe for the modern times.

«For St Thomas – the Pope said - the encounter with the pre-Christian philosophy of Aristotle  opened up a new perspective. Aristotelian philosophy was obviously a philosophy worked out without the knowledge of the Old and New Testaments, an explanation of the world without revelation through reason alone. And this consequent rationality was convincing. Thus the old form of the Fathers’ “our philosophy” no longer worked. The relationship between philosophy and theology, between faith and reason, needed to be rethought».

It is in some way what is happening nowadays. That’s why John Finnis looked back to Thomas thought. «He is –  the philosopher explains – a founder of modern thought because he is by far the most lucid and comprehensive transmitter of the best parts of the best philosophical tradition in human history, the tradition running from Plato through Aristotle, a tradition whose relevance and validity are not at all exhausted or really surpassed, apart from some aspects of the natural sciences».

There are several parallelism between Thomas Aquinas and the Pope. «Together with the agreement between reason and faith – the Pope told – we must recognize on the other hand that they avail themselves of different cognitive procedures. Reason receives a truth by virtue of its intrinsic evidence, mediated or unmediated; faith, on the contrary, accepts a truth on the basis of the authority of the Word of God that is revealed». This distinction «guarantees the autonomy of both the human and the theological sciences. However, it is not equivalent to separation but, rather, implies a reciprocal and advantageous collaboration. Faith, in fact, protects reason from any temptation to distrust its own abilities, stimulates it to be open to ever broader horizons, keeps alive in it the search for foundations and, when reason itself is applied to the supernatural sphere of the relationship between God and man, faith enriches his work».

Are there common goods which can be recognized by anyone, wheter he is a beliver or a non-beliver? «I think – John Finnis answers – everything ontologically rests on, or “presupposes”, divine existence and Creation and Providence.  But one can do physics without attending to that philosophically established ontological precondition of physics.  And similarly, one can go very far in following practical reason where it leads without attending to the ultimate ontological (metaphysical) precondition of intelligibility, intelligence, practical principles, the goods to which those principles direct us, and so forth.  As St Thomas makes extremely clear (but very many of his followers neglect and overlook this), the proper epistemological order of  discovery and the true metaphysical order of dependence run in opposite directions.  So, by focusing on the epistemological order or sequence of reflection, one can indeed provide a meeting point for all but dogmatic nihilists.  The value of truth and knowledge, for example, can be made perspicuous by clearing away misleading images and distractions».

Benedict XVI goes in the same direction. His thought strongly influenced the diplomatic work of the Holy See. It is evident by browsing the web site of the State Secretariat: speeches on religious freedom are focused on the equality among human beings, statements about «life» issues are on the focused on the same «reasonable» argumentations, statements about interreligious dialogue are based on the research of “common goods” among religions. Thomas Aquinas, facing the challenges of this modern times, would do the same, according to John Finnis. «One – the philosopher says – can point especially to his realism about truth and its accessibility to natural reason, that is to an open-minded and rigorous and deep-going enquiry, using sources of information accessible to anyone.  He also is very conscious that philosophical positions should be abandoned if the articulation and defence of them as true is inconsistent with their content – which is obviously the case with post-modernist theses, but also certainly the case with empiricist and idealist positions.  On the dialogue (but there is also really a clash) between civilizations, he would say essentially what was said by the holy Father at Regensburg university.  On neurosciences he would serenely point out that however extensive our knowledge may be or become about the physical preconditions of human thought and decision, the spiritual character of thought and of choice transcends those material preconditions, not simply is special circumstances but also in the ordinary activities of, say, conversation.  This is the source of the dignity and inviolability and radical equality of all human beings, which is the central issue and truth of bioethics».

Benedict XVI’s method is Thomistic. But is aim comes directly from the example of Saint Benedict. During an age of decade, Saint Benedict retired in the mountains, and from his monastery in Montecassino gave birth to European civilization. It was not his final goal. His final goal was quaerere Deum. «Our cities – Benedict XVI explained in his speech to College of Bernardins – are no longer filled with altars and with images of multiple deities.  God has truly become for many the great unknown.  But just as in the past, when behind the many images of God the question concerning the unknown God was hidden and present, so too the present absence of God is silently besieged by the question concerning him.  Quaerere Deum – to seek God and to let oneself be found by him, that is today no less necessary than in former times.  A purely positivistic culture which tried to drive the question concerning God into the subjective realm, as being unscientific, would be the capitulation of reason, the renunciation of its highest possibilities, and hence a disaster for humanity, with very grave consequences.  What gave Europe’s culture its foundation – the search for God and the readiness to listen to him – remains today the basis of any genuine culture».