John Paul II. Story of a secretary and a cruet. Holy See and Italy, is there something new on? 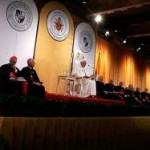 What do Universities of Padua, Bologna, Louvain, Paris, Prague and Oxford have in common? They all come from “the heart of the Church”. John Paul II explained it in the Pastoral Constitution Ex corde ecclesiae, written in 1990. Looking hindsight, the decision of John Paul II to write this Pastoral Constitution (considered the Magna Carta of Catholic Universities) the year after the fall of the Wall of Berlin was a prophetic choice. Catholic universities, nowadays, are always less centered around their Christian identity. That’s the reason why anyone can “use” Catholic Universities. To teach things that are not Catholic. By hiring  teachers who don’t really know what Catholic Church is. It is a subtle and perilous game. It is not the doctrine  attacked. It is the game of influencing ecclesiastic institutions to let the Church say what they want it to say. It is a game played on the line of freedom of thought.

Talking about the trip of Benedict XVI to the United States, there are two events people use to remember: the meeting – private and unexpected – between Benedict XVI and the victims of priests’ sex abuse; and the speech at the assembly of the United Nations. But, for American observers, there was another important speech, maybe considered even more important: the speech addressed to Catholic Educators, in the Conference Hall of the Catholic University of America, on the 17th of April 2008. Pope Benedict XVI said: «Teachers and administrators, whether in universities or schools, have the duty and privilege to ensure that students receive instruction in Catholic doctrine and practice. This requires that public witness to the way of Christ, as found in the Gospel and upheld by the Church’s Magisterium, shapes all aspects of an institution’s life, both inside and outside the classroom. Divergence from this vision weakens Catholic identity and, far from advancing freedom, inevitably leads to confusion, whether moral, intellectual or spiritual».

It was an essential speech for U.S. Catholic Environment. The Episcopal Conference of United States formally approved the specific guidelines to put Ex corde into practice in 2001, after more than a decade of dialogue and debate. The debate was in some way influenced from Land O’Lakes Statement, issued in 1967 mostly by presidents of the major Catholic colleges, described from many as a sort of Declaration of Independence from the church. The statement proffered the notion of a Catholic college as the «critical reflective intelligence of the Church», standing in judgment of—instead of adherence to—the Catholic faith.

That’s why, a few days before the 2008 trip of Benedict XVI to the United States, reportages were outlining stories like the one of Rebecca de La Garza, a freshman of Georgetown University (the oldest Roman Catholic and Jesuit University in America):even if  she was studying in a Catholic University, she explained that she did not «feel aligned with the traditional Church» and she told the journalist that campus convenience stores don’t sell condoms, though students drink and engage in premarital sex «like in any other college».

The last news coming from the US, divulged by Cardinal Newman Society, are not heart-warming. The Cns denounces that the Higher Education Act of the Obama administration may extend the role of the State into defining curriculum, teaching methods, subject matter content, faculty qualifications, and learning outcomes. «The door is open to state politicians and bureaucrats who want to impose their social agendas on private and religious colleges - warns Patrick J. Reilly, President of The Cardinal Newman Society – The Obama administration has already seized direct ownership of student loans, and now a student’s eligibility for a loan is subject to the political whims of its state legislators and regulators. Many states are demonstrating a callous disregard for the religious identity of Catholic colleges, from mandating contraceptive coverage in student and employee health plans to requiring employee benefits for same-sex couples».

This is not the only point. The National Labor Relations Board (it’s a piece of news of January 2011) rules that a Catholic University’s fundamental «purpose is secular and not the propagation of the faith».

The US case is exemplar, since United States are considered by everybody as one of the most open countries to religion. But there are similar cases all around the world. The Catholic University of Louvaine, founded in 1425 by Pope Martin V, is said to be entering into a process of reconsideration of their catholic identity, even to the point of removing the adjective «Catholic» from their title. A “bomb” news in Belgium, where the breaking between Church and Belgian State brought to the arrest and segretation of an assembly of bishops by the Belgian Police in the framework of investigations about sex abuses by Belgian priest, while at the same time investigators were desecrating two cardinals’ graves in search of proofs. At Manila University, a big discussion took place about the support of the faculty of the University on more issues: the Reproductive Health Bill, which legalizes artificial birth control and gives it the appropriate budget from the National Government; a teacher in a Catholic University who supports for the adoption of homosexual norms in the government, in defiance of Catholic moral teaching.

It’s not such a news. Events like these happened even when Ex Corde was released. That’s why John Paul II wrote in Ex Corde that the specific purpose of a Catholic university is «to help students think rigorously, to act rightly and to serve the cause of humanity better». Several times these words have been ignored.

Catholic universities lost much of their specificity, and they seem to be open to everything. Not in an open climate where exchange ideas, but that there is no care for their specificity and their identity. It seems that there is no plan to educate in a Catholic way. It is a long-term problem. The Pope was avoiding to go at La Sapienza because of the protests of few students and teachers, who did not want the leader of a religion talking in a public university. More recently, in Spain, the same happened to cardinal Rouco Varela, who could not speak at the Universidad Autonoma de Madrid. In the next year, it will be sufficient to remove the adjective “Catholic” to universities born as Catholic to delete the Catholic way to educate in universities. If a religion loses its right to teach according to its principle, all of religion can lose this right. This is one of the reasons why religious freedom is nowadays at risk.