Workers in the Vineyard of the Lord. Silvano Maria Tomasi, the love for the Truth 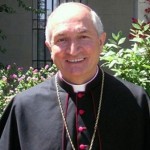 «The awful thing is that beauty is mysterious as well as terrible. God and the devil are fighting there and the battlefield is the heart of man». This extract of The Brothers Karamazov by Fyodor Mikhaylovich Dostoyevsky well represents – according to the archbishop Silvano Maria Tomasi – the experience of competition between freedom and oppression, truth and skepticism. «Nowadays  – Tomasi explained in a conference held in Rome -  contrapositions are not maybe so fairly defined, but they are indeed real and profound. We are talking about two interpretation of the human experience, rooted the one on the being of reality and the other on the “convenient” building of reality. This second choice seems to be particularly cherished by many experts and managers of international organizations».

Just a few know the obscure work of Silvano Maria Tomasi, permanent observer of the Holy See to the United Nations in Geneva. Scalabrinian missionary, born in 1940, long-term diplomat, from his post of permanent observer he fights against the dictatorship of relativism, that is also maybe the favorite battlefield of Benedict XVI – the Pope dedicated to this topic one of his first papers, New Pagans and the Church. It is a fight for the truth. The same Pope, in his book Light of the World, observed that a large part of contemporary philosophies affirm that the man is not able of truth. «The consequence is – Tomasi comments – that man is not any more able of ethical values, cannot have objective standards and ends by accepting as the only standard the opinion of majority».

Not casually the first message of Benedict XVI for the World Day of Peace was titled: «In Truth, peace». And not casually the major part of battles on this topic had been brought on – during the last years – by msgr. Tomas from Geneva. His speeches, interventions, papers had been rarely highlighted by medias. Yet, they have a strong diplomatic impact.

In some ways, there will be a little of Silvano Maria Tomasi in the next Concistory. The red hat given to Antonio Maria Vegliò, president of the Pontifical Council for Migrants, is the signal that the Pontifical Council gained a renewed importance, and this is also thanks to the entrance of the Holy See as a full member in the International Organization for Migration. This entrance, Tomasi proposed and strongly supported.

Holy See is accredited as a full member in several international organizations – e.g. IAEA, as a founding member – while it keeps the status of permanent observer to the United Nation. Holy See has no intention to get a “political” weight by becoming a full member of the United Nations – what if the Holy See would vote in a session to finance a military intervention? What would be the international and political backlashes? On the other hand, is very important that the Holy See have a “political” weight when political on migrations are on discussion. During the 100th session of the Council of the International Migration, Tomasi underlined that «the achievement of an adequate global management of migration flows, a positive understanding of them , and the approach to human development may seem long range goals. But the speed of the journey is less important than proceeding in the right direction».

What is the right direction? «Nowadays – Tomasi wrote – it is not easy to indicate a clear date when a way of thinking began. Therefore, the change of the dictionary and the prevalence of a new one began with the sexual revolution of 1968 and imposed with more coherence and insistence after the fall of the Wall of Berlin in 1989». It was then that the two blocks of the Cold War had been replaced by a plurality of actors in the international scenario. «In this new situation – Tomasi explained in a debate on February, 17 2011  – United Nations felt freer. More: they felt invested of the precise mission to promote practical priorities that – according to the advisors involved – would have led to a more rightful and free world».

This new dictionary is – Tomasi explained – «a mixture of words of authentic human aspirations and values and of words that represent an individualistic ideology brought to the limit. This latter inspires and guides the managers of the world governance. This is how we get to a systematic and lasting transition of words in the documents of United Nations: from government to governance, from authority to autonomy and rights of the individuals, from spouse to partner, from happiness to quality of life, from given to built, from family to family in all of his forms, from dignity sufferance to the right to die, from majority decision to consensus, from dogma to freedom of interpretation».

These changes of the dictionary are part of a long term battle, whose seeds can be seen back in international conference and interventions.  For example, in the 1995 Conference of Beijing. Mary Ann Glendon, who was part of the Vatican delegation at the time, was not lenient towards the UN’s intentions:  «Many who promote abortion as a woman’s right do not by any means have women’s real interests at heart. The movement for abortion rights conceals irresponsible men, trafficking in prostitution, industries that make their profits from women’s bodies».

And a book has been published in Italy that brings to light for the first time in a direct and detailed way this anti-Catholic aversion of the UN and the EU: «Contro il cristianesimo. L’ONU e l’Unione Europea come nuova ideologia [Against Christianity: The UN and the European Union as a New Ideology]», by Eugenia Roccella and Lucetta Scaraffia.  In the introduction to the volume, Roccella and Scaraffia identify the roots of the new ideology as the «separation between sexuality and procreation». «More – they write – than a different model of sexual behavior, but conceptually analogous to those that have preceded it in history, this is a question of a real and true utopia, because it is based upon the idea that human beings can find happiness in the realization of their sexual desires, without the moral, biological, social, and relational limitations linked to procreation. This utopia has its roots in the sexual revolution in the West during the 1960′s, and it has not yet been disputed, even though it seems not to have kept its promises. It is a utopia that echoes another, one that brings painful memories: that the selection of new human beings can create a better, more healthy, more beautiful humanity».

It is not just a matter of words. It is a matter of ideology. The conceptual scenario has its own dynamics, and this leads to concrete transformations in several branches of social and political life. Religious freedom and the way it has been handled down is an example. An approach to religious freedom linked to intolerance is first brought on in the Declaration on the principles of Tolerance of UNESCO in 1995 and is then promoted in the Resolution 2004/36 adopted from the 60th session of the Human Rights Commission in the United Nations in 2004. A new chapter of the quest is then open with the  resolution 61/164 (Combating the defamations of religions), adopted from the General Assembly of the United Nations December, 19th 2006. In that resolution, religion is used to limit other basic freedoms (the right to the freedom of expression) and to oppress religious minorities when some impose with force and terrorism their religious ideologies and others deny a place in the public sphere to faith and belief.

As always, one should look back in time. It was in 1981 – when the General Assembly of the United Nations adopted the Declaration on the Elimination of All Forms of Intolerance and of Discrimination Based on Religion or Belief – that the concept of tolerance has been placed by side to religion or belief. «But tolerance – Tomasi explains – is a tool, not a right. In fact, while with religious freedom we mean the warranty of Government that individuals have freedom of belief and the warranty of freedom of cult for individuals and groups – including the freedom not to believe in any god, religious tolerance is the condition to accept or permit beliefs or religious practice that are different from his own one».

Holy See is one of the few sovereign entities that is aware of the risks of this change of dictionary, and that understood that this is a crucial battle. The efforts of the Holy See in this battle are probably on the basis of the initiatives to undermine the Holy See diplomacy, from the outside and from the inside.

In this crucial battle, archbishop Tomasi is one of the paladins of the Church.  He works behind the curtain, but he is one of the few intelligences able to understand what are the things on the play. United Nations have the ambition of a New World Order, and to follow this goal they create a new anthropology. «The implication – Tomasi explained – is that adaequatio rei et intellectus (the accordance of the intelligence with reality) – gained from the reason and theology – is to be replaced from a reality that is socially and subjectively built, so that truth and reality has not a stable and objective contents and every interpretation of this content is equal. This dictatorship of relativism does not use visible and brutal methods as political dictatorships. It works from inside the institution and – through consensus – promote a neutrality that let impose their own norms».

One Response to Workers in the Vineyard of the Lord. Silvano Maria Tomasi, the love for the Truth