Consistory. New cardinals’ profile show the Papal project for the Church. Workers in the Vineyard of the Lord. Silvano Maria Tomasi, the love for the Truth 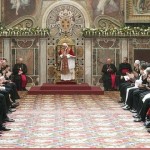 To get back to the solidity of International law, to abandon – or at least take it in less consideration – the fickleness of diplomacy. If there is a plan, this is the one of Benedict XVI. Since the beginning of his papacy, he gave his personal impact to the Vatican diplomacy. The theme of the first message of Benedict XVI for the World Day of Peace – that is traditionally delivered to governments and diplomatic representation to the Holy See – was In truth, peace. «The theme chosen for this year’s reflection – Benedict XVI wrote -  expresses the conviction that wherever and whenever men and women are enlightened by the splendor of truth, they naturally set out on the path of peace». From this only sentence, one can understand the impact Benedict XVI had in the diplomatic work of the Holy See.

Traditionally, the speech the Pope holds in front of the Diplomatic Corp Accredited of the Holy See marks the beginning of the new year. The Pope goes through all the remarkable international facts of the past year, usually paraphrasing the contents of the message for the World Day of Peace. But in the speech held the last January, 9th, the contents of the message for the World Day of Peace 2012 – Educating young people in justice and peace – took just a few lines of the speech. And the speech itself is more focused on the message that would have been, more than on the one that had been delivered. In fact, the original sketch of the message had been profusely amended by the Vatican Secretariat of State. To have an idea of what the first sketch of the message was, it would be sufficient to read the speech that msgr. Mario Toso – secretary of Pontifical Council for Justice and Peace – held at the opening of the School of Peace in Este.

What does the Pope really think? The 9th of January speech marks the line. The Pope knows that the difference of Christianity is in truth. He knows that the Church must obviously dialogue with the «signs of our time», but that at the same time the Church cannot lose its identity. This lack of identity, Joseph Ratzinger – as Prefect of the Congregation for the Doctrine of the Faith – wanted to underline in the declaration Dominus Jesus. This lack of identity, Joseph Ratzinger – as young theologian – underlined in a paper, «New pagans and Church», that came directly from his first experience as vice parish priest – when he used to confess one hour a day, and four hours every Sunday. And Christian identity, based on truth, had become the center of the program of his Pontificate.

It is because of Truth – Benedict XVI underlined in the message for World Day of Peace 2011 – Christians are persecuted. And this is why – the Pope said to the ambassadors in the 9th of January speech – «in many countries Christians are deprived of fundamental rights and sidelined from public life; in other countries they endure violent attacks against their churches and their homes. At times they are forced to leave the countries they have helped to build because of persistent tensions and policies which frequently relegate them to being second-class spectators of national life. In other parts of the world, we see policies aimed at marginalizing the role of religion in the life of society, as if it were a cause of intolerance rather than a valued contribution to education in respect for human dignity, justice and peace».

Notwithstanding the attempts to undermine the Holy See diplomacy, diplomatic corps accredited to the Holy See has increased during the last year, since Malaysia established diplomatic ties with the Holy See and the Association of South-East Asian Nations (A.S.E.A.N.) accepted the appointment of an apostolic nuncio accredited to that organization. Another sign of the cooperation existing between the Catholic Church and States is seen in the Accords reached in 2011 with Azerbaijan, Montenegro and Mozambique. But probably the main piece of news is in the intention of Benedict XVI to concentrate the procedures of diplomacy on international law.

The speech of the Pope follows the first sketch of the message of the World Day of Peace: from the financial crisis to the Arab Spring and the «vast movement calling for reforms and a more active share in political and social life» brought on by young people, and finally to the request for the «respect of the creation», universal issue that needs «a great sense of solidarity and responsibility towards present and future generations» to be pursued.

Yet, in view of the renewed outbreak of violence in Nigeria, in view of the hostilities and acts of violence that continue in Syria, in view of tensions between Palestinians and Israelis that affect the stability of the entire Middle East (Benedict XVI praises to the Kingdom of Jordan mediation), an excellent person merges as a symbol: Shahbaz Bhatti, the Pakistan minister for Religious Minorities, whose «untiring battle for the rights of minorities ended in his tragic death. Sadly, we are not speaking of an isolated case. In many countries Christians are deprived of fundamental rights and sidelined from public life».

To this sideline of religion, Pope opposes «the legislative amendment whereby the public juridical personality of religious minorities was recognized in Georgia», and then also «the sentence of the European Court of Human Rights upholding the presence of the crucifix in Italian schoolrooms».

Benedict XVI also asks «to implement educational policies which ensure that schooling is available to everyone and which, in addition to promoting the cognitive development of the individual, show concern for a balanced personal growth, including openness to the Transcendent».

Before the education, there is the human being. The Pope provides law responses: he notes «with satisfaction the recent sentence of the Court of Justice of the European Union forbidding patenting processes relative to human embryonic stem cells, as well as the resolution of the Parliamentary Assembly of the Council of Europe condemning prenatal selection on the basis of sex». More: «I am convinced –  Benedict XVI says – that legislative measures which not only permit but at times even promote abortion for reasons of convenience or for questionable medical motives compromise the education of young people and, as a result, the future of humanity».

And before the human being, there is the openness to the Trascendent. «Religion – the Pope says, as he already did in Assisi – cannot be employed as a pretext for setting aside the rules of justice and of law for the sake of the intended ‘good’. In this context I am proud to recall, as I did in my native country, that the Christian vision of man was the true inspiration for the framers of Germany’s Basic Law, as indeed it was for the founders of a united Europe».

It is a recall to the roots of Western civilization, and to the rules and laws produced following these common roots. Benedict XVI does not want to play the same game medias and institutions against the Church play. He remarks the difference of Christianity. And – to do it – he does not commit in communication campaigns, he does not choose to follow the signs of our times and to outline a Church adherent to the world. He just points out what the difference is, and he recalls to laws that had been inspired by this peculiar difference. The game is not any more based on  communication and diplomacy. The game the Pope is now playing is based on truth and law. This is a more solid path to thread. It is a path more adherent to Truth.