What’s the future like, at the Vatican media? Vatican Finances. How the story began

The Year of the Five Patriarchs: A Chance for Unity

By Andrea Gagliarducci On 4 febbraio 2013 · 3 Comments · In Ecumenism 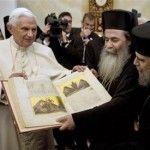 Ultimately, is an upstairs/downstairs exercise. Go up a number of  steps and then come down a few and meet in the middle.  Tawadros II, the new Coptic-Orthodox Patriarch of Egypt, had to go up three steps during his enthronement ceremony. At every step, one of his titles was proclaimed: bishop of bishops, head of pastors, Pope and Patriarch of Saint Mark’s Chair. Then, he promptly came down these steps, to visit the Patriarchs and leaders of the Christian Churches of Egypt. Among them, the new Patriarch of the Coptic-Catholics, Ibrahim Isaac Sidrak. The latter chose as patriarchal motto a quote from Paul’s second letter to the Corinthians: «He reconciled us with him through Christ and entrusted us with the reconciliation mystery.»  Communion and reconciliation are the keys that can bring about a new dialogue and –why not?– a reunification of the “sister churches”; keys that can open many doors, in the year of the five patriarchs.

In a quick succession of events, from the second half 2012 until now, a patriarch of an eastern church has been created cardinal and five new patriarchs have been elected. The most recent one is the Patriarch of Babylon of the Chaldeans: after four days of voting, Louis Sako, Archbishop of Kirkurk, has been elected successor to Cardinal Emmanuel III Delly. Sako’s patriarchal motto is: «Authenticity, Unity and Renovation.»

Three of these patriarchs are part of the Catholic Church, and got the ecclestica communio (ecclesiastic communion) from the Pope. Two of them are not part of the Catholic Church, but are part of that ecumenical movement that seems to advance rapidly with respect to relations between the Catholic Church and Christian Eastern Churches. So quickly that an ecumenical meeting between Benedict XVI and the Russian-Orthodox Patriarch Kirill seems ever more possible –Finland is the country most recently mentioned as a candidate to host an unprecedented meeting between the two leaders.  Meanwhile, the Pope and the heads of eastern churches often exchange fraternal messages. A great harmony has always reigned between the Pope and the Patriarch Bartholomew I in particular.

There are more difficult challenges looking west. Not particularly with the Anglican Church. Yes, Westminster has a new primate, Justin Welby. But his relationships with the Catholic Church will be as good as his predecessor’s. A former manager in oil companies, Welby has often noted that he was educated in the Social Doctrine of the Catholic Church. Yes, he is very open to the ordination of women bishop and gay priests. But this is foremost an Anglican internal problem rather as of yet a problem for ecumenical dialogue.

The Catholic Church has more problems with other Protestant Churches It is, again, a matter of steps. In Erfurt –where Martin Luther studied and decided to become an Augustinian monk– only 80 steps divide the Church of Saint Severe from the Cathedral. Benedict XVI walked these 80 steps with care –during his visit to Germany in 2011– as if aiming, symbolically, to fill the gap between the Catholic Church and the Protestant Church. Many expected an ecumenical gift, i.e. the revocation of Martin Luther’s excommunication. The Pope brought the gift of proposing a common path to God, because –he stated– «Christians’ faith is not based upon a consideration of our advantages and disadvantages. Faith is not something we think up of and agree upon. It is the bedrock on which we live.»

There is an idea for a big ecumenical meeting between Catholics and Lutherans in 2017, coinciding with the 500th anniversary of the Reform. But the Protestant world is wary and almost took offence at comments made by Card. Kurt Koch, President of the Pontifical Council for the Promotion of Christian Unity. Koch recently said that «in the last decades, the goal of the ecumenical movement has lost clarity, and more than a few Churches of the Reform abandoned the original goal of the visible unity of the Common Faith and of Sacraments, and embraced instead the postulate of diverse ecclesial communities as churches that are parts of the only church of Jesus,»  so that «the unity of the Church happens to be a sum of ecclesial realities. To picture it, I am drawn to an image of many one-family dwellings, where families live independently and invite each other for lunch every now and then.»

Will these tensions be overcome? Perhaps the answer is in what Paul VI said when he first met Patriarch Athenagoras: «Let us live a fraternal life and let us pray for the theologians.»  Theologians have in fact done a lot for the ecumenical dialogue, especially with regards to the schism between the Church with the eastern churches. Steps to overcome the schism are ongoing: they began with the reciprocal revocation of excommunication and extend to the outcome declaration of the 2007 Ravenna ecumenical-theological meeting. In that document, the bishop of Rome is defined as protos (the first) among the patriarchs, albeit how to exercise this «primacy»  is yet to agreed on.

Benedict XVI has always underlined the need for «spiritual ecumenism» . Meeting youth of the community of Taizé –everybody can be part of this prophetic community: Catholics, Orthodox, Protestants– the Pope underlined that its path is the right one. «We should listen from within –he said– his ecumenism lived spiritually and be lead by his witness to a really interiorized and spiritualized ecumenism.»

In the meantime, Benedict XVI undertook specific actions. For example, extending more frequently the berretta rossa to the heads of oriental churches in communion with Rome. This tradition was introduced by Pope John XXIII, and followed by Paul VI, John Paul II and Benedict XVI. Some theologians maintained that the cardinal title (i.e. a Roman clergy member, and thus an elector of the Pope, who is the bishop of Rome) cannot be given to a patriarch. Patriarchs –these theologians maintain– have a greater dignity (almost on par with the Pope’s) than cardinals. Furthermore, patriarchs are part of a tradition different from the Latin tradition. Benedict XVI, nevertheless, has chosen to reinforce the Church’s unity over these theological considerations.

The last action of this kind was the creation of cardinal of Bechara Boutros Rai, Maronite Patriarch of Lebanon. Just a few days ago, it was announced that the new cardinal would help two young Lebanese charged with writing the Good Friday Via Crucis meditations. The Pope continuously refer to Lebanon as an example of religions’ cohabitation, and this is even more important considering the difficult situation of Middle-East countries, where the Arab Spring has been a Winter for Christians. That is why having five new patriarchs and a new cardinal-patriarch is an important development. At a difficult time for Christians, ecumenical dialogue and overcoming the scandal of the division among Christians are necessary to preserve Christian communities. The year of the five patriarchs is a chance for unity.

3 Responses to The Year of the Five Patriarchs: A Chance for Unity