The Pope renews his confidence in Georg Gaenswein, and appoints him Prefect of the Pontifical Household In a letter to Child Jesus, Ratzinger’s life agenda. Which the Pope restated in his most recent speech to the Curia

Blessed are the peacemakers. May they be prophets of a new social evangelization 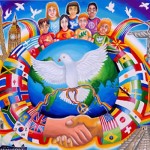 The food crisis, «which is more grave than the financial crisis». The promotion of human life, because «those who insufficiently value human life perhaps do not realize that in this way they are proposing the pursuit of a false peace». And then, the affirmation of social rights, beginning with the right to work; the need for a new model of development; the push for a «pedagogy for peacemakers» – an issue that Benedict XVI has raised repeatedly since his message for the 20th anniversary of the Assisi’s meeting of Religions, in 2006. These are the challenges and the agenda of peacemakers, outlined in the message of the next World Day of Peace, which is about – after the Gospel – «Blessed are the peacemakers».

The Papal message for the World Day of Peace is particularly important. It is delivered to foreign ministries of all over the world, and from it Benedict XVI draws for the traditional speech he delivers at the beginning of every year to the ambassadors accredited to the Holy See. This year’s message perfectly tracks the themes of the recent Synod for the New Evangelization. In the message, the Pope maintains that a renewal of the proclamation of Christ is the first and fundamental factor of peace; and affirms that a new commitment and a new ethic can come about, above all, from the encounter of people with God. And because of that encounter, the hierarchy of criteria that govern the world today can be turned upside down. Because of that encounter, there power and profit no longer prevail over everything else, and aims and means are corrected. Only in Christ can peacemakers face the challenges which awaits them.

Themes of the Message for the World Day of Peace.

All the themes the Message for the World Day of Peace deal with are based on two main premises: that «Peace is not a dream or something utopian; it is possible»; and that peace can happen only in the relationship with God, in comprehending why there is a fraternity among men, committing us to the pursuit of the common good. There is no peace if relativism rules. There can only be peace with communion. Communion leads to overcoming inequalities, and guides the agenda for integral human development. «Peace – it is written in the message -is principally the attainment of the common good in society at its different levels, primary and intermediary, national, international and global. Precisely for this reason it can be said that the paths which lead to the attainment of the common good are also the paths that must be followed in the pursuit of peace. »

Much has been said about the financial crisis, and very little about the food crisis. Yet, data released by the FAO recently is revealing: there are 870 million people suffering from hunger in the world, especially in Africa and in the Middle East. So, «the issue of food security – the Pope maintains – is once more central to the international political agenda, as a result of interrelated crises, including sudden shifts in the price of basic foodstuffs, irresponsible behaviour by some economic actors and insufficient controls on the part of governments and the international community.»

The Pope’s appeal is supported by data. This data is not in the message, but is – one could say – the architecture on which the Papal appeal is based. This data shows that several basic foodstuff prices are dangerously close to 2008 levels, when turmoil over bread prices exploded in about 30 countries. Yet if prices oscillate so often that it is really difficult to plan for investments in agriculture – UNCTAD, a United Nations agency, advises – it is because of finance. In fact, the exchange of finance derivatives of basic foodstuff is 20-30 times bigger than investment in the real market. Investments in agricultural lands in developing countries – OXFAM data shows – increased by 200 per cent in 2008. Sixty percent of land purchases took place in countries where there is hunger. These hectares, which could feed a billion people, were used to cultivate and produce biofuels.

How can we confront the food crisis? «Work together in a spirit of solidarity, from the local to the international level, with the aim of enabling farmers, especially in small rural holdings, to carry out their activity in a dignified and sustainable way from the social, environmental and economic points of view.»

It is a subsidiarity principle, which should be applied in facing the economic crisis. «The ideologies of radical liberalism and technocracy  – the message states – reflect the conviction that economic growth should be pursued even to the detriment of the state’s social responsibilities and civil society’s networks of solidarity, social rights and duties.» Among social rights and duties «most under threat today» is the right to work. Several times during his pontificate the Pope spoke about the right to work, even expressing his solidarity toward those who did not have an employment to sustain themselves. Without work there is no opportunity to build the future, nor a family. But the Papal denunciation perhaps looks further, to China – where social rights seem to be a utopia – and to a Europe in an economic and identity crisis, where social rights are diminished with the excuse of the lack of resources. «The reason for this – the Pope writes – is that labour and the rightful recognition of workers’ juridical status are increasingly undervalued, since economic development is thought to depend principally on completely free markets.» The goal of access to steady employment for everyone must be achieved, as stated in Benedict XVI’s social encyclical Caritas in Veritate. In the mean time, there is a need of «a fresh outlook on work, based on ethical principles and spiritual values that reinforce the notion of work as a fundamental good for the individual, for the family and for society. Corresponding to this good are a duty and a right that demand courageous new policies of universal employment».

In the end, the message is about a new social evangelization. The premise is that «true peacemakers are those who love, defend and promote human life in all its dimensions: personal, communitarian and transcendent.» To support the liberalization of abortion means to insufficiently value human life, and those who support it «do not realize that in this way they are proposing the pursuit of a false peace. The flight from responsibility, which degrades human persons, and even more so the killing of a defenceless and innocent being, will never be able to produce happiness or peace.» Ultimately, peace, integral human development, and even the safeguarding of nature, cannot be achieved «without defending the life of those who are the weakest, beginning with the unborn.» Because «every offence against life, especially at its beginning, inevitably causes irreparable damage to development, peace and the environment.»

The Pope aims even higher. He says that «neither is it just to introduce surreptitiously into legislation false rights or freedoms which, on the basis of a reductive and relativistic view of human beings and the clever use of ambiguous expressions aimed at promoting a supposed right to abortion and euthanasia, pose a threat to the fundamental right to life». The Pope is also referring to the UN resolution «Preventable maternal mortality and morbidity and human rights», adopted on September 21, 2012 by the UN Council for Human Rights, which would surreptitiously open the door to a «right to abortion».

It is a whole UN vocabulary that should be changed, as noted by Silvano Maria Tomasi, the Holy See permanent observer at the UN Council for Human Rights in Geneva. This change of vocabulary – a vocabulary which roughly dates back to the sexual revolution – lead to the disappearance of the word «abortion» in international documents, substituted by the more neutral right to reproductive health; but it also lead to the disappearance of the word «family» from the United Nations vocabulary. The semantic borders are so ambiguous that there is a risk to mistake religious freedom with freedom of worship or expression.

So – the Pope writes – «at this stage in history, it is becoming increasingly important to promote this right not only from the negative point of view, as freedom from – for example, obligations or limitations involving the freedom to choose one’s religion – but also from the positive point of view, in its various expressions, as freedom for – for example, bearing witness to one’s religion, making its teachings known, engaging in activities in the educational, benevolent and charitable fields which permit the practice of religious precepts, and existing and acting as social bodies structured in accordance with the proper doctrinal principles and institutional ends of each.»

A pedagogy for peacemakers

How to teach a culture of peace? The basic cell is the family, which has «a natural vocation to promote life» because «it accompanies individuals as they mature and it encourages mutual growth and enrichment through caring and sharing». Then, the Pope asks «cultural institutions, schools and universities for a notable contribution not only to the formation of new generations of leaders, but also to the renewal of public institutions, both national and international. They can also contribute to a scientific reflection which will ground economic and financial activities on a solid anthropological and ethical basis. Today’s world, especially the world of politics, needs to be sustained by fresh thinking and a new cultural synthesis so as to overcome purely technical approaches and to harmonize the various political currents with a view to the common good.»

There is the need of a «pedagogy for peacemakers», comprised also of a rich interior life, clear and valid moral points of reference, and appropriate attitudes and lifestyles. In fact, «acts of peacemaking converge for the achievement of the common good; they create interest in peace and cultivate peace. Thoughts, words and gestures of peace create a mentality and a culture of peace, and a respectful, honest and cordial atmosphere». It  is «a slow process», for «there is a need to renounce that false peace promised by the idols of this world along with the dangers which accompany it, that false peace which dulls consciences, which leads to self-absorption, to a withered existence lived in indifference». A pedagogy of peace, instead, «implies activity, compassion, solidarity, courage and perseverance». Ultimately, it is about the realization of the Beatitudes. And the Beatitudes – Benedict XVI reminds us in the very beginning of the message – are promises, not merely moral exhortations.

2 Responses to Blessed are the peacemakers. May they be prophets of a new social evangelization