A new Vatican financial controversy? Religious communities: not lawless areas, but spaces of freedom. The Church’s autonomy in four paragraphs.

Courageous bishops needed. To proclaim the Word of God 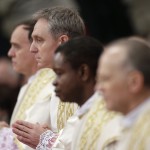 What will be the agenda of the four bishops the Pope ordained in the solemnity of the Epiphany? Benedict XVI outlined it with these words: «The humility of faith, of sharing the faith of the Church of every age, will constantly be in conflict with the prevailing wisdom of those who cling to what seems certain. Anyone who lives and proclaims the faith of the Church is on many points out of step with the prevalent way of thinking, even in our own day. Today’s regnant agnosticism has its own dogmas and is extremely intolerant regarding anything that would question it and the criteria it employs. Therefore the courage to contradict the prevailing mindset is particularly urgent for a Bishop today.»

Right after the homily, the Pope ordained four bishops: Angelo Vincenzo Zani, Secretary of the Congregation for Catholic Education; Nicolas Henry Marie Thevenin, appointed Papal Nuncio in Guatemala; FortunatusNwachukwu, former head of protocol of the Vatican Secretariat of State, who will be Papal Nuncio in Nicaragua; and Georg Gaenswein, personal secretary of His Holiness. From each of them a good dose of courage will be demanded, to face the challenges of the times.  Zani is the number two of the Congregation for Catholic Education, which recently lost responsibility for the administration of seminaries – a decision that many in the Sacred Palaces still do not understand; Thevenin has been often under attack for his personal loyalty to Cardinal Tarcisio Bertone, the Secretary of State; Nwachukwu was promoted to Papal Nuncio and sent to a faraway –yet of a great Catholic tradition– country, and some have interpreted this appointment as a consequence of the “blood feud” that followed theVatileaks scandal; and finally Gaenswein, who was placed more than anyone else at the center of attention of Vatileaks, was able to come out of it exonerated and to obtain in the process more than a moral victory.

These bishops faced courageously all the polemics. Gaenswein and Nwachukwu wanted to dispel rumors of tension between them with a course of action that was as eloquent as only Vatican ceremonials can be: they went together to greet the new Cardinals in the last consistory in November. And Gaenswein – accused of being unfit to be Papal secretary, or even not completely faithful to Benedict XVI – wanted to make of his Episcopal blazon an hymn of his attachment to the Pope. Gaenswein assumption of the post of Prefect of the Pontifical Household – added to his responsibilities asthe Pope’s personal secretary – gave Gaenswein the option to use a quadrant of his coat of arms to insert the reigning Pope’s blazon.

It is a heraldic privilege that don Giorgio (as Gaenswein is known in Rome) readily exercised.  Thus, Gaenswein’s blazon shows to the left Benedict XVI’s coat of arms: a brown bear loaded with a pack of lumber on his back, a refence to an old Bavarian legend about the first bishop and patron saint of the Diocese of Freising, St. Corbinian; the large gold shell that recalls a legend in which St. Augustine came across a boy on the seashore who was scooping water from the sea and pouring it into a small hole he had dug in the sand; a brown-faced Moor with red lips, crown and collar, a symbol of the former Diocese of Freising dating back to the eighth century that according to Ratzinger is «an expression of the universality of the Church which knows no distinctions of race or class since all are one in Christ». The right portion of Gaenswein’s coat of arms presents a dragon. In heraldry, dragons symbolize fidelity; in ecclesiastic heraldry, it recalls the dragon defeated by Saint George – whom Gaenswein was named after. The dragon belch out fire toward «the house of Ratzinger» (the left section of the shield). It is on a blue background, and the upper right section of the shield depict the star of Bethlehem. From that star, the spear that kills the dragon comes, also a Marian reference. Perhaps, the choicesin this coat of armsallude to the bitter memories of the Vatileaks scandal, when the Pope and Gaenswein himself were under attack.

But Gaenswein is now stronger than ever. His Episcopal motto is telling: Testimonium perhibere veritati, «witnessing the truth». Gaenswein’s motto recalls the Pope’s own Cooperatores veritatis, cooperators of truth. Does it prefigure for Gaenswein a more operational role with the Ratzinger Foundation, committed to promoting awareness of Benedict XVI’s papers and books?

Fortunatus Nwachukwu’s motto, on the other hand, is completely different: Solvere calceamenta, take your shoes off. This motto – the Nigerian Archbishop himself explained – «recalls mission and service. Both mission and service are rooted in the word of God, and are brought to completion in the Cross of Incarnation and in the universal embrace.» Nwachukwu coat of arms depicts a shoe under the book with the Alfa and Omega and the Cross. Ultimately, the «take your shoes off» that God orders to Moses in front of the burning bush was also the theme of the spiritual exercises that Nwachukwu lead some years ago and that have been published. The book is a tool to reflecton the hard effort and the challenge that every conversion entails, taking as examples Moses, Bartimaeus the blind, and the prodigal son. Nwachukwu took a courageous decision: he celebrated the thanksgiving mass in the Cathedral of Christ the King in Aba,in his native Nigeria. A Nigeria that with increasing frequency hasgrasped media attention for indiscriminate and frequent attacks on Christians: there, the sect Boko Haram carries out a war of bombings targeting the faithful coming out of Churches; but also there, Christians and Muslims try nevertheless to live peacefully side by side, despite the attacks.

Even Benedict XVI spoke about Nigeria, in his traditional New Year’s speech to the ambassadors accredited to the Holy See. The speech focused on three pillars: human rights, religious freedom, and conscientious objection. Here in all diplomatic efforts are encompassed. There is no separation between a social agenda and an agenda for life issues, there is not a divide between the Gospel and diplomacy, as is often maintained – as if the Holy See’s diplomacy could be something detached from the truth of the Gospel. There is a diplomacy that comes directly from the Gospel and the teaching of Jesus Christ.

The Christian philosopher Emmanuel Mounier once wrote: «When Christ said: ‘My kingdom is not of this world’, he did not say that we are not of this world, but that his message was not directly for the happy settlement of this world. This settlement we want to work for, facing directly the difficulties of our times and not discouraging Christian transcendence with weak settlement, ridiculous for the world and for God.»

This quote is from Mounier’s «Agony of Christianity?» published in the 1946. Nowadays, the question mark of that title seem to have turned into an exclamation point. This agony does not refer exclusively to Christianity: it has to do with all religions. «Peace in society – the Pope said to the ambassadors – is also put at risk by certain threats to religious liberty: it is a question sometimes of the marginalization of religion in social life; sometimes of intolerance or even of violence towards individuals, symbols of religious identity and religious institutions.»

Agony of religions does not only come from the mortal blow struck against religious thought broadly. It comes from the fact thatsociety increasingly puts God aside. «It is precisely man’s forgetfulness of God – Benedict XVI maintains – and his failure to give him glory, which gives rise to violence. Indeed, once we no longer make reference to an objective and transcendent truth, how is it possible to achieve an authentic dialogue?»

In his world overview, Benedict XVI begins from the conflict that are taking place in Syria, Iraq and several African countries; he asks for a diplomatic solution to the Israeli-Palestinian question; he indicates the example of Lebanon, a country where the plurality of religious traditions is part of that country’s wealth, more than a reason for conflict; he finally notes «with dismay that, in various countries, even those of Christian tradition, efforts are being made to introduce or expand legislation which decriminalizes abortion». The most recent and illustrative case is that of the Philippines, where the Reproductive Health Bill has become law. In addition, the last report of the Social Doctrine in the World, entitled «Colonization of the human being», focuses on Argentina as a «case study», where four different modifications of the laws has brought about, ideologically, to the  «rebuilding» of what a human being is according to law. What a human being is, and how to protect him, combating the «new rights», is part of the long term mission of the Holy See.

In fact, grave concern for the «new laws» that alienate the human person was already contained in the Immortale Dei encyclical by Pope Leo XIII. Leo XIII gave birth to Catholic Social Doctrine, and his encyclical Rerum Novarum is considered the first of the social encyclicals. In fact, there is a whole corpus of Leo XIII’s social encyclicals. Immortale Dei is the first of these encyclicals, and gives the Leonianum Corpus a theological background, presenting the model of Christian society and the anti-model that is still nowadays seeking to establish itself in international bodies – for example, recently the right to abortion has been subtly inserted in a UN resolution, which could compel national legislationsto guide themselves by the resolution and even to believe that abortion needs to be part of their laws.

That is why the Pope underlined in his speech to ambassadors that «especially in the West, one frequently encounters ambiguities about the meaning of human rights and their corresponding duties. Rights are often confused with exaggerated manifestations of the autonomy of the individual, who becomes self-referential, no longer open to encounter with God and with others, and absorbed only in seeking to satisfy his or her own needs. To be authentic, the defence of rights must instead consider human beings integrally, in their personal and communitarian dimensions.»

These are challenges that the new bishops must confront, with courage to walk out of step with the prevalent thinking. The Pope’s exhortation is for bishops who will make use of this courage in the international arena – like Nwachukwu and Thevenin; for bishops that will have to be courageous within the Roman Curia; and for bishops in every Catholic diocese, who must be courageous enough to lead the faithful. So, Benedict XVI’s homily in the Solemnity of the Epiphany mass is a universal exhortation that is closely linked to the speech to the ambassadors. In the end, Holy See diplomacy is rooted in the Gospel. This is the Pope’s message.

One Response to Courageous bishops needed. To proclaim the Word of God