Holy See, is there a Libyan contraddiction? Ior. A backward scenario.

Holy See and China, toward a «creative solution» 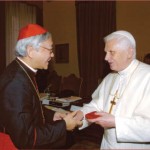 «In a particular way, in Asia and in Africa, the chief victims are the members of religious minorities, who are prevented from freely professing or changing their religion by forms of intimidation and the violation of their rights, basic freedoms and essential goods, including the loss of personal freedom and life itself». Benedict XVI wrote these words in the 2011 World Day of Peace Message. The message was released in the mid-December. About one month before, the twentieh of November 2010, there had been new tensions between China and the Holy See. Rev. Joseph Guo Jincai was ordained bishop in the North-Eastern city of Chengde by China’s State backed Catholic Church. One month after this ordination, a National Assembly of Catholic Representatives took place in China. The Holy See made express recommendations to the bishops not to take part to the assembly, but some of the bishops were forced to participate.

The assembly was held in Beijing in December 7 to 9, 2010, and saw the election of the new leadership of the Council of Chinese bishop (not recognized by Pope) and the Patriotic Association, whose aims are irreconciliable with a Catholic doctrine. Thanks to manoeuvrings of the Communist Party, Joseph Ma Yinling, (illegitimate) Bishop of Kunming was voted the new chairman of the Council of Chinese Bishops, and Johan Fang Xinyao of Linyi (in communion with the Pope) is instead the new leader of Patriotic Association.

Church and China are now slowly recovering from the socks suffered at the end of the last year. Mgr Paul Liang Jiansen was ordained the 30th of March as the new bishop of the diocese of Jiangmen (Guandong). Bishop Liang, 46, is approved by the Pope and recognized by Beijing. This «twofold» approval is necessary in China: the 10 million estimated Catholics of the country are split between followers of the Pope and members of the Chinese Catholic Associations. The association is not in communion with Rome and refuses to accept the sole authority of the Pope to appoint new bishops.

In recent years, Episcopal ordinations in China have seen fluctuating fortunes. In the 2005, all new bishops were ordained with the approval of both the Pope and the Chinese authorities. In 2006, Joseph Zen, bishop of Hong Kong, was made cardinal, and China immediately went back to electing bishops without the Pope’s mandate, in April and November. In January 2007, when the news came out that Benedict XVI was going to send a pastoral letter to the Church of China, the consecration of bishops not authorized by Rome ceased, and the new bishop of Beijing was elected with the Pope’s consent. But, starting in December 2007, everything came to a halt for more than two years. In 2009 Hu Jintao came to Italy to participate to G8. The Pope let him know that he would be happy to receive him at the Vatican. The meeting could not be held, but the Pope invitation was appreciated. Then, new bishops were ordained with the twofold approval of the Pope and the Chinese government. After Guo Jincai controversial ordination and the Assembly – the ordination of Mgr. Liang in Jiangmen would open to a new season for Vatican diplomacy in China.

The «creative solution» – as some observer call it – is outlined from the Benedict XVI address to diplomatic corps. After focusing on the case of the China, Benedict XVI quoted the example of Cuba, a communist country which has had diplomatic relations with the Vatican for more than 75 years. And later the Pope cited the positive development in Vietnam, where authorities «have accepted my appointment of a Representative who will express the solicitude of the Successor of Peter by visiting the beloved Catholic community of that country». The «Vietnam model» would be a solution: it does not imply diplomatic relations between States, but the States permission for the Vietnamese Catholics to have relations with the religious hierarchies related to their faith, thus ensuring with their religious freedom.

But card. Joseph Zen, retired archbishop of Hong Kong, has issued a bitter complaint against Church officials who seeks to reach accommodation with the Chinese regime. He argued that the Catholic bishops of China should be urged to resist pressure from Beijing, rather than encourage to avoid confrontations. And he said that mixed signals from Vatican are partly responsible for the fact that many bishops who profess loyalty to Rome participated to the illicit ordination of Joseph Guo Jincai and in the election of new leaders for the Catholic Patriotic Association. «Our bishops – card. Zen said – needed some supply of courage, but instead they received much misplaced compassion, which pushed them deeper and deeper into the mire of slavish subjections».

Is it the time to appease or to strengthen their identity for Chinese Catholics? Chinese situation in the Human Rights field is – as AsiaNews put it – «worse than before the 2008 Olympics, because now the authorities do not only want to silence dissidents for some time, rather they want to silence him entirely». The crackdown began in mid-February, when the protests broke out in North Africa, and China government was terrified by the call to the people, posted on line, to take to the streets for peaceful protests. As a reaction, Beijing began to imprison all noted dissenters, closed down blofs, hunt down critical journalism. The data of the repression of the so-called «Jasmin revolution» are impressing: more than 200 democracy activists under house arrest and at least 26 in prison, many without charge or on trumped-up charges.

Is the diplomatic solution – China broke off relations with the Holy See in 1951 – the right one? Or maybe the Church would follow the path of Matteo Ricci, whose beatification cause is underway? For 28 years he searched for compromise with the court mandarins. Then, he understood that it would have been better to leave the announcement of the Gospel to the care of little (and poorest) communities. Is this the path to follow?