Crucifix, was it defended properly? Holy See and China, toward a «creative solution»

Holy See, is there a Libyan contraddiction? 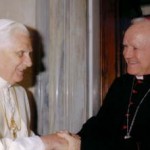 Imagine this scenario: on one side you have Card. Angelo Bagnasco, president of the Italian Episcopal Conference, stating that «according to the Gospel, intervention is necessary when somebody’s in difficulty». On the other side  you have the Secretariat of State, where they prefer not to take an official, diplomatic stance. And, in the middle, you have Tripoli’s bishop Martinelli, supporting the need of diplomatic mediation.

From a merely Italian perspective, such a difference regarding the intervention of the Us-Ue countries coalition (now under the umbrella of the NATO) in Libya might be flagged as the last domestic war between the Secretariat of State and the Italian Episcopal Conference. However, such a view would prove to be short-sighted for two reasons. First of all, these positions are actually complementary. Secondly, they bring to light a strong contradiction of international diplomacy.

Let us take a step backwards. Let us look at the current ‘Arab spring’, that even fr. Federico Lombardi, president of the Press Office of the Holy See, claimed to be supporting. We then need to look at what happened in Tahrir Square in Egypt, at that apparently quiet revolution around the North of Africa and beyond. Then, to the list of the uprising nations we need to add Bahrain -and the bloody repression that followed, and Yemen -where a coup is highly dreaded. But we also need to register the Algerian, the Tunisian, and the Syrian protests. Winds of change were blowing in the Arab world, and especially in the North of Africa.

In those same days, agency news talked about British special units helping the Libyan revolt. So, Libya is living its own ‘spring’ too, but it is a spring feeding itself out of forty-years of ethnic conflict between Cyrenaica -traditionallly powerless in the distribution of resources, and the Gaddafi regime. The rebels are civilians, but not defenceless. Gaddafi reacts, and in a disproportioned way.

And it is here that the coalition enters the scene. The 1973 ONU resolution establishes a no fly zone, and military intervention is advocated. France and Britain lead the way, USA participate -just like Italy, while Germany abstains from intervening. But there is more more to that: the BRICs (Brazil, Russia, India, China), in fact, take no stance. Aiming at a multi-lateral kind of politics, in fact, these countries have no intention of being ‘swallowed’ in a two-way diplomacy between the EU and the USA. The BRICs’ stance -or, lack of stance, is, in this case, meaningful.

The Holy See as well is since a long time devoted to the idea of multi-lateral politics, as some «criticism» to G8s and G20s show. Silvano Tomasi’s last speech on religious freedom in Geneve tells about a more transversal commitment, based on human rights. Therefore, coming from ‘above’ rather than a multi-lateral perspective, military intervention cannot be supported. With diplomatic wit, the Pope  asked for «peace on the horizon’ for Libya» -according to the headlines of the Osservatore Romano, the Holy See’s daily newspaper. At the same time, the Italian Bishopry, via their daily newspaper Avvenire and the person of Angelo Bagnasco, explain their reasons for supporting military intervention in Libya, and the thousands uncertainties this brings with itself -noone of these reassuring. Finally, during the 27th of March Sunday Blessing, the Pope asked «to international bodies and those who hold military and political responsibility for an immediate start of a dialogue that suspends the use of arms in Lybia».

It is in this appparently contrasting scenario that the real contradiction of international politics comes to light. It is a contradiction going beyond corruption, interests, the connivence of those countries who needed to deal with Libya and all that allowed Gaddafi to stay in power for more than forty years. If a mayor took a rifle and shot his fellow citizens, he would not be justified under the pretence he behaved in the way he wanted according to his personal sovereignty. However, this is not the case in the international scene, where dictatorships are allowed to dispose at their wish of their own citizens -in spite of human rights and in the name of ‘national sovereignty’. Then  when somebody decides to intervene, it can’t be done directly, -unless to violate the principle of national sovereignty. It is then that the casus belli is created. This might seem disrespectful, but it would be just like a person trying to take his friend’s spouse and turning their children against him. Once it’s the kids themselves to attack their father, it won’t be difficult then for him to get the wife.

What is lacking here is an international right allowing to act immediately and righteously, going beyond the semi-sacred principle of national sovereignty. Gaddafi’s case represents the failure of a still-too-local and not-global-enough international diplomacy -so ‘not-global-enough’ that they don’t even think about intervention in Yemen or Bahrain, let alone Ivory Coast.

This is why the Holy See has taken no official stance. This does not mean intervention is not supported in case human rights are violated. John Paul II repeatedly advocated the need of humanitarian intervention (for example in 1992 and in 1997), but he proved a strong pacifist during the latest Gulf War. And Pope Benedict himself, in his speech to the United Nations in 2008, underlined the necessity of a strong international community. Because – the Pope said – «the life of the community, both domestically and internationally, clearly demonstrates that respect for rights, and the guarantees that follow from them, are measures of the common good that serve to evaluate the relationship between justice and injustice, development and poverty, security and conflict».

One Response to Holy See, is there a Libyan contraddiction?