A rabbi talks with the Pope. To save the world from religious indifference Christmas according to Joseph Ratzinger

Message for the World Day of Peace: what it is, what it would have been 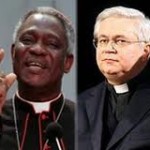 There is the official Message for the World Day of Peace. And there is the message that could have been, and has not. There are Benedict XVI’s words – that in Benin  «blessed» the events that have produced the «Arab springtime» and independence in Southern Sudan; and there is a message that – albeit indicating the commitment of young people as the answer to the crisis -  keeps the issues on general levels. And so, during the press conference held by cardinal Peter Turkson and mons. Mario Toso, number one and two of the Pontifical Council for Justice and Peace, the general level had been summarized and concretized in one only word: the search for a true democracy. Just note that the word «democracy» is never mentioned in the message for the World Day of Peace.

There is someone – within the Sacred Palaces – that makes this question: is this message for the World Day of Peace the most adequate to be sent to governmental and diplomatic representation of all the world? Is not the message – albeit so theologically rooted – just something more than a good homework, a scholastic composition on the topic of Educating young people to justice and peace? It is still fresh in memory what happened with the last document released by the Pontifical Council for Justice and Peace, the note titled “Towards reforming the international financial and monetary system in the context of global public authority”: the note had been approved – after amending it – by the Vatican State Secretariat, and then disowned, subjected and polemics born within the Roman Curia and leaked in improbable versions to the press (then partially contradicted).

The message for the World Day of Peace had been profusely amended by the Vatican State Secretariat. Anyway, the original “spirit” of the message remained so   untouched that Turkson and Toso – holding the press conference to present the message – had been able to explicit item by item what in the message remained implied. And it would be sufficient to read the last public speech held by mons. Toso – at the opening of the School of Peace in Este – to find out that that speech was full of many of the topics issued during the press conference. Was that text inspired to the first sketch of the message? Or was it just the deep explanation of what the message ought tell the world?

Benedict XVI launched an appeal to young people in the Message for the World Day of Peace: «Realize that you yourselves are an example and an inspiration to adults, even more so to the extent that you seek to overcome injustice and corruption and strive to build a better future. Be aware of your potential; never become self-centred but work for a brighter future for all. You are never alone. The Church has confidence in you, follows you, encourages you and wishes to offer you the most precious gift she has: the opportunity to raise your eyes to God, to encounter Jesus Christ, who is himself justice and peace».

Noting a «rising sense of frustration» at the worldwide economic recession, Pope Benedict XVI said that a more just and peaceful world requires «adequate mechanisms for the redistribution of wealth». The message laments that «some currents of modern culture, built upon rationalist and individualist economic principles, have cut off the concept of justice from its transcendent roots, detaching it from charity and solidarity». Authentic education, Benedict XVI writes, teaches the proper use of freedom with «respect for oneself and others, including those whose way of being and living differs greatly from one’s own». Peace-making requires education not only in the values of compassion and solidarity, but in the importance of wealth redistribution, the «promotion of growth, cooperation for development and conflict resolution». The Pope also calls on political leaders to «ensure that no one is ever denied access to education».

One topic – that is maybe the true revolution of the Papal words – is fundamental: young people must be educated to peace, but they have to educate as well. Italian Catholic politician Giorgio La Pira used to say that «young people are the swallow that announce spring». Toso glosses: «We find in young people a fresh intuition of what the big values are: they can find the way to make an air blast».

Card. Turkson remembered that the drafting of the message «was marked by a series of manifestation of young people from almost all the European capitals. The young’s attitude at the beginning of the last years had been pessimistic and despaired. The frustration for the economical crisis grew up. Now, we know that the roots of this crisis are more in cultural and moral than in economical issues. Young people are not bodies isolated and separated from the rest of society. They, on the contrary, are the most vital part of the human family, and we must listen to their request that too often remain uncome up. The worries expressed by too many young people mean the wish to watch with hope to the future».

«Also journalists – mons. Toso remarked – should question themselves about what they can do for justice and peace. There is the need of a non mediocre education, which in fact is. Benedict XVI repeatedly invited to raise up new generations, and he did not tell it only for what concerns the political world: he also referred to people that work in economy, in finance. We need to educate citizens, political administrator, cultured people in all the fields, included the communication branch. We need that the various knowledges help the search for truth, strengthen the wish for the common good, become place where the dignity of human being is respected».

In the message, the word democracy is never mentioned. Otherwise, mons. Toso underline it several times. «The responsibles of the several cultural and social institutions – he says – must take care of their institutions in order the same institutions are instructional and right, since democracy need to be right to educate. The message for the World Day of Peace relates to what the encyclical Pacem in terris issued. Do we really want to build a substantial democracy? Do we really want to build a new international order? If so, we have to educate to freedom, justice, truth and love. In the human catastrophe, when education is emergency, the Pope invites us to work seriously to build the pillars of the New Humanism. We should look at the important speeches held by Benedict XVI (the ones in Germany, the one in Westminster) in which the Pope talks about the reformation of the State,  and this latter must be a State based on the rule of law, that involves religious freedom for everybody. The teaching of Benedict XVI may have been forgotten, so it is important to pose it again, since his speeches are crucial to reform the institutions. Young people that moved the Arab Spring  letted understand that there cannot be social justice if there is not democracy, and there cannot be democracy if there is not social justice. Democracy does not exist without justice, and justice must not lose its trascendant roots. We must watch out for moving the consciences on national, international, cooperation and conflict resolution issues. This must be applied to the current world situation, and must be linked to the present national and international issues, as for example to the problem of wealth redistribution in a global context. That is why there must be a global social justice. What does moving the consciences mean if not commit in order to let social subjects understand the problems of biblical migrations, of poverty, of external debt, of the fall of dictatorial regimes?»

Not only the Third World Countries are affected by the problem of the search for a true democracy. In Western countries – as Ralf Dahrendorf and his thought on post-democracy demonstrates – we are now going to a oligarchical populistic democracy.

And what about the intergenerational exchange? «It is implicit in the message – Toso answers – but it is definitely not the point. We are not talking about a simple substitution. It is about preparing a new generation with an integral education, to give their contribution to a world of peace».

One Response to Message for the World Day of Peace: what it is, what it would have been