Mueller leaks. Even the new Guardian of the Faith attacked in leaks… Unsuccessfully. 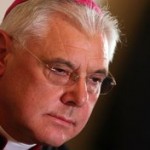 Perhaps Benedict XVI’s «silent revolution» is the main reason for the Vatileaks attacks. Step by step, one appointment after another, the Pope reorganized the «chessboard» of a Curia that – during the last years of John Paul II’s Pontificate – got all too accustomed to operate independently.  And perhaps it is not by chance that the most important appointment, that of Prefect for the Congregation of the Doctrine of the Faith, was also preceded by some leaks.  Interestingly, the leaks about the new Prefect for the Congregation of the Faith were of a particular kind.  Whereas the leaks published on the book His Holiness by Gianluigi Nuzzi and on the Italian media were fairly «Italo-centric», the leaks on Gehrard Mueller, the new Prefect, is the stuff of specialists.  Mueller was attacked for his presumed lack of adherence to Catholic Orthodoxy. The most recent attack was in an email delivered anonymously to some vaticanologists.  It contained excerpts of Gehrard Mueller’s books, allegedly showing that he does not belief in transubstantiation or the virginity of Mary, and also displaying his particularly unorthodox ecumenism and relations with Protestantism. The excerpts were presented completely void of their context, and thus do not convey Gehrard Mueller’s ideas. The Pope was impervious to Mueller’s critics: he appointed him prefect of the Congregation for the Doctrine of the Faith.

There is a specific reason why the appointment of Mueller took place notwithstanding any internal or external criticism.  It is the same reason that moved Benedict XVI to appoint Tarcisio Bertone as Secretary of State and to renew his esteem and trust in him several times – most recently through an open letter from the Papal residence in Castel Gandolfo, where the Pope spends his summers.  The reason is personal trust.  The Pope trusts Mueller, he considers him a personal friend.  He trusts him  so much that he wanted Mueller to be the curator of the publication of his opera omnia in Germany. The relationship between Benedict XVI and Mueller is such that the first argument raised to prevent Mueller’s appointment was that «it would be better for a bishop close to the Pope to remain in Germany, to weather the storm (of challenges to Rome within the Church in that country)».

It is a fact that, traditionally, the German-speaking world does not feel close to Rome and is vulnerable to a sort of crude reformist competition with Lutheranism.  It was from the German- speaking world that the Pfarrer Initiative – the proposals from a group of parish priests for a renewal in the Church and for married priests and the ordination of women – came out.  The Pfarrer Initiative began in Austria and found fertile ground in many parts of the Church in Germany, a national Church already influenced by dissident movements like We are Church – popular with Catholic associations and also among bishops. It is a real challenge, given that Robert Zoellitsch – the president of the German bishops’ conference – does not seem the right man to weather the storm.  Zoellitsch quite unexpectedly jumped to the top of the German bishops’ conference.  As is the case with other national conferences of bishops — except Italy’s, which President is selected by the Pope–  Zoellitsch was voted in by his fellow German bishops, to whom he may feel obliged.  This could weaken his authority and make his job more difficult.  Thus, some within the Sacred Walls lamented: Why on earth not leave Mueller in Germany, to be a counterweight in a Church so rich and also so detached from the Gospel that during his last trip to Germany the Pope himself asked her to be less worldly?

But Benedict XVI trusts Mueller, whose works in dogmatic theology are highly regarded. Furthermore, Mueller is one of the most prominent interpreters of Joseph Ratzinger’s intellectual discourse.  Mueller’s reflections recently focused on the idea of  “un-mundanizing”, which Mueller, then archbishop of Regensburg, explained as a process to «transform and unify.»  Transform and unify can be considered a sort of «synthesis» of Benedict XVI’s thought.  When he was prefect of the Congregation for the Doctrine of the Faith, Ratzinger perfected a method, the same method he used when he was a professor of theology: no complete condemnations, since theology is the always perfectible path to follow the word of God; if there must be a condemnation, the Congregation must deliver two instructions, one pars destruens and the other one pars construens,  as part of  a dialectic process.  Transform what is not good, and then re-unify.  This was the method followed, for example, when the Congregation for the Doctrine of the Faith issued its pronouncements on the Theology of Liberations: first, the Congregation condemned its Marxist orientations (instruction Libertatis Nuntius); then, the Congregation acknowledged its preferential option for the poor (instruction Libertatis Conscientia).  Obviously, this decision was misunderstood in South America.  Leonardo Boff, for example, missed the point, and later decided to leave the Franciscan order and marry; his brother Clodoveo Boff, on the other hand, fully understood the Congregation’s message. The first to understand was Gustavo Gutierrez, the father of the Theology of Liberation, who made some corrections to his book «Theology of Liberation» and joined the Dominican order, probably in order to avoid possible tensions with the local clergy.

Mueller and Gutierrez are friends.  Mueller has been several times to Peru, on visits to the Peruvian Dominicans and to give lessons at the once Pontifical University of Peru – the very same institution from which  the Secretariat of State recently took away the title of «pontifical» because of the university’s lack of adherence to the Doctrine of the Church.  Mueller’s honoris causa PhD from the formerly “pontifical” Peruvian university and his friendship with Gutierrez are underscored in the second round of unsolicited information about Mueller anonymously divulged.  The insidious question being raised: is a friend of Liberation Theology trustworthy?

Contrary to widespread perceptions, Benedict XVI is not an ultra conservative out of touch with reality.  With an attention to detail typical of a professor of theology, the Pope wants us to remember that the Church is founded on Christ and Truth, and that her social impact is meaningless without Faith. At the same time, the Pope readily acknowledges what is good and innovative in the world, and welcomes the opportunity to enter into a fruitful dialogue with new ways of thinking. «Transform and unify» –the key to understand Ratzinger’s «un-mundanizing» prescription– actually constitutes Benedict XVI’s program for Church governance.

And so the Pope did not heed to critics, and appointed his friend as prefect of the most important dicastery of the Curia.  There, some of the most prominent officials of his Pontificate were trained. If one would seek for a sort of “Ratzinger’s school”, he would need to look at the Congregation for the Doctrine of the Faith.  A Congregation, called La Suprema, which has gained the upper hand recently in its competition for influence with the second section of the Secretariat of State – the diplomatic section.  Thus, one should look to the “old” Vatican diplomats to understand the war that is being waged inside the Vatican.