The Pope in Assisi. Aiming at the Year of Faith. And – maybe – a new encyclical. The bonfire of vanities. A curial story.

Palestinian question. The interest of the Holy See. 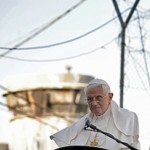 The Executive Board of UNESCO, the UN organization concerned with education, science and culture, recommended granting full recognition to the Palestine state. Out of of 58 member countries on the Committee, 40 voted in favor of the recommendation, which was proposed by the Arab group. Four countries: the United States, Germany, Romania and Latvia – voted against it, while 14 others, including Spain and France, abstained.  It is not just a symbolic act, and everybody knows it: Israel defined the decision a tragedy and United States already halted the funding to the United Nations agency. But some observer think that the story of the Region could be finally told with a wider range of narratives, or at least it can be told enlarging the point of views.

Yet, it is not so sure. The balances of the Region are not insisting only on the Palestinian question, as father Jaeger put it some years ago. There is the Israeli-Iranian question – and according to rumors and reading the official declaration an Israelian attack to Iran can be considered probable, and then there are several problems in Lebanon and Syria. About what happened in this latter during the last months, the Holy See diplomacys has been accused of having acted too prudently. But the Holy See position has been prudent as well regarding the last international initiatives of the Palestinian Authority.

Holy See has always supported the «two states» solution. Archbishop Dominique Mamberti, the Vatican’s number two State Department official, called Sept. 27 for a two-state solution to the Palestinian-Israeli conflict in remarks delivered in New York. He insisted that «if we want peace, courageous decisions have to be made», and he referenced Resolution 181 of the General Assembly, also known as the United Nations Partition Plan for Palestine. The resolution, which was adopted in 1947, recommended the creation of two states in the Palestine region. «One of the states has already been created, while the other has not been established yet, although nearly sixty-four years have passed», Mamberti said.

It was the only climax of the Holy See position, that always maintained  fairly conservative profile with respect to unilateral attempts led by the President of the Palestinian National Authority, Abu Mazen, to have the United Nations General Assembly vote on the recognition of a Palestinian state first, and  to have the Assembly of the UNESCO vote to accept Palestine as a full member. Nor Osservatore Romano seemed to want to take a clear position against an initiative like Abu Mazen’s, which is deemed right and good in principle, but seems doomed to failure and could paradoxically lead to a further strengthening of Hamas.

The mood inside the Catholic world had been largely the same, although characterized by a more marked sympathy for the gesture by Abu Mazen, considered by some observers as one of the last chances to end the current deadlock in diplomatic talks. Although, in the Arab Christian world – the consensus with the initiative of the Palestinian leader had been warmer. Still recently, with the Syrian crisis, the Greek-Catholic Patriarch Gregory III Laham was able to identify in the unresolved Palestinian issue the origin of all Middle Eastern problems. Similarly, in his recent trip to France, the Maronite Patriarch Béchara Boutros Raï insisted on the fact that Palestinian refugees in Lebanon will have to go home one day.

On the eve of Abu Mazen’s trip, then, the leaders of major Christian churches in Jerusalem, regardless of religion or rituals, issued a statement of support and approval for the initiative of the President of the PNA. When the news of the Unesco’s decision broke, William Shomali, auxiliar bishop  of Jerusalem and vicar for Palestine of Latin Patriarcate of Jerusalem, affirmed that «it is a victory».

Holy See is granted in the United Nations by the peculiar status of permanent observer State. In 2004, the UN General Assembly confirmed the Vatican’s status as a Permanent Observer. Currently, the Holy See has the right to participate in the general debate of the General Assembly and to intervene in the discussion of any issue inscribed in the agenda of that assembly. It has the right to participate in all meetings open to all Member States, the right to make points of order and to exercise the right of reply, the right to circulate proposals and position papers as official documents, and the right to co-sponsor draft resolutions and decisions. Commenting on that resolution, Archbishop Celestino Migliore, the then Holy See Permanent Observer to the United Nations, said that «we have no vote because this is our choice» and added that the Holy See considers that its current status «is a fundamental step that does not close any path for the future. The Holy See has the requirements defined by the UN statute to be a member state and, if in the future it wished to be so, this resolution would not impede it from requesting it».

This kind of status is considered by many a sort of privilege. But just a few remember that the Holy See has the right of active and passive legation right since the IV century, and its international juridical status is universally acknowledge. The Holy See’s seat in the United Nations is not a privilege – as sustained by campaigns like See Change, aimed to make of the Holy See on a pair of a Non Governmental organization. The attack to the Holy See’s legation right had been several, even because the Holy See opinion is always respected and heard.

That is why the Holy See looks with much interest at the Palestinian diplomatic initiatives. For the PNA, UNESCO is another possible way to international recognition. The Palestinians are also trying to secure a bridgehead into the World Trade Organization and this week have won partnership status on the Council of Europe. All these initiatives aim to help achieve the main objective, namely, UN recognition of the Palestinian territories as a state.

With the UNESCO decision, the scenario will change, and peculiarly for two issues: Jerusalem and Israeli settlements. Let us make some examples. First of all, Palestinian sites will considered be relevant in the world. Until now, it was not possible enlist a Palestinian site in the UNESCO World heritage list, since Palestine was not a State and it was not part of the UNESCO. Now it will be possible.

Giving a short glance to the possible Palestinian World Heritage site would let under stand the peculiar interest of the Holy See in the Region. For example, the Church of Nativity in Betlehem – heart of Christianity- that UNESCO could not proclaim as part of the World Heritage Site List the last May because Palestine does not formally exist. And then Jericho, with its traces of thousand of years of history, of the byzantine era, of the Christianity; Nablus and his Old Town; and finally Hebron and Al Khalil.

The Israeli settlements issue will be raised, and not only for what it concern Hebron, but also for the villages Melina Mercouri and Battir. Around these villages – in-between Betlehem and Jerusalem – there are settlements as Har Gilo, Cremisan, Walajeh. It’s many years that the artistic value of these village risks to disappear, because of the expansion of settlements and of the continuing construction of the Separation Wall. So, what will be the consequences if the Palestine will candidate Battir as World Humanity Heritage Site?

Finally, Jerusalem. The Old City of Jerusalem is part of the UNESCO World Humanity Heritage since it had been candidated by Jordan – that still his the custodian of the Muslim Holy Places. Out of the ancient Soliman’s Wall there is much more that can be enlisted. Even the City of David, a site in the heart of Silwan controlled by radical colonies – could be enlisted among the UNESCO sites. What if Palestine would candidate in Jerusalem – the capital of Palestine – the Lazar’s Tomb, the Mount of Olives, the byzantine monasteries as part of the World Humanity Heritage? What if Palestine would candidate the White Town in Tel Aviv – the capital of Israel?

The diplomatic channels of the Holy See is now called to give a good account of itself. At the moment, Holy See is suspended between the support to the Two People-Two Nations solutions – the Pope claimed for it during his trip in Israel, and he did again during the last meeting with Abu Mazen – and the need not to diplomatically annoy Israel – there is still the issue of the Fundamental agreement discussion still on. What will be the weight of Vatican diplomacy for the Palestinian question?

One Response to Palestinian question. The interest of the Holy See.