Holy See, the Italian affair Benedict XVI. The last of Benedictins, the first of Thomists

The Green Pope, from Genesis to Kyoto 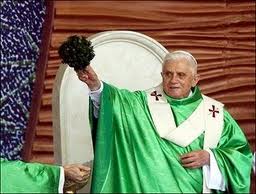 Benedict XVI, the Green Pope: this has been the name often used to call Joseph Ratzinger since he is Pope. He has paid much attention to the topic of environment since his very first speech. He wrote about it in the encyclical Caritas in veritate. He dedicated to this topic the 2010 World Day of peace and the 2010 address to the ambassadors accredited to the Holy See. Foreign Policy, a prestigoious American geopolitics magazine, has ranked Benedict XVI 17th among the ‘top 100 global thinkers’ of 2009. The reason? He «has positioned the church prominently and unexpectedly as an advocate for the environment and warned against the perils of climate change».

Public opinion got again aware of the Green Pope when Wikileaks began publishing the Us Embassy dispatches about the Vatican. The first cable about the Holy See was titled «The Green Pope Supports US Path Forward From Copenhagen». It tells about a meeting that took place on the 20th of January between an embassy officer and Dr. Paolo Conversi, according to the cable the  «point person on climate change» for the Holy See’s Secretariat of State. Conversi agreed to encourage countries «discreetly to associate themselves with the Accord, as opportunities arise». The Copenhagen Accord is a non-binding expression of commitment to reduce greenhouse emissions and to help developing countries adapt to anticipate climate changes.

Other cables talk about the pressure of Us government on the Vatican to make the Holy See change its position about Gmo. The Holy See refused, but promoted a sophisticated criticism stating that «a large diffusion of Gmo Food in developing countries would create a form of economic imperialism useful to enrich multinational corporations». Then, Marcelo Sanchezo Sorondo, Chancellor of the Pontifical Academy of Social Sciences, held a speech during which he stated that transgenic agriculture can be useful only in order to alleviate hunger in the world, but – on the other hand – transgenic agriculture should not become a way of speculating against the social justice. Sanchez Sorondo underlined that developing transgenic seeds to fight hunger is «a positive fact» that may help the assertion of «justice among goods and people». This statement was considered as a Vatican statement in favour of Gmo. That’s not true. The speech opened the debate inside the Church itself, which offers various standpoints about the issue.

Actually, there is not an official Vatican position on climate change, nor on Gmo because there is still nothing certain. The contribution of the Vatican to the debate is in order to alleviate world hunger. Osservatore Romano, Holy See newspaper underlined a couple of years ago that the problem was that everybody wanted the Church to be part of the debate, and everybody wanted the Church to be in favour of any topic. Vatican opinion is highly requested and it has a strong impact on public opinion. Another Wikileaks cable reports that «even more important than the Vatican’s lobbying assistance, however, is the influence the pope’s guidance can have on public opinion in countries with large Catholic majorities and beyond».

These are misleading analysis. True, the Vatican installed solar panels on Aula Paolo VI (its 10,000-seats main auditorium building), and it arranged to reforest land in Hungary to offset Vatican City’s carbon emissions. Benedict XVI considers the respect of the creation as a more in deep topic. Taking care of creation implies a relationship between the creator and what the creator created. So, the Vatican as a prudent approach to eco-issues: take care of the earth, but don’t consider the man as an intruder, and don’t fall on “Malthusian” adrift. Human being lives on the earth, and needs to take care of the earth to respect himself and the future generations. From Genesis to Kyoto Protocol, it’s always the same. Even former Popes deserved to environmental issues the same attentions. Pope Paul VI, in his 1967 encyclical Populorum Progressio, linked heavy consumption to injustice, declaring that «no one may appropriate surplus goods solely for his own private use when others lacks the bare necessities of life… The earth belongs to everyone, not the rich». John Paul II added a spiritual dimension in Centesimus annus, critiquing «a style of life which is presumed to be better when it is directed towards having rather than being». The late Pope so urged people to «create life-styles in which the quest for truth, beauty, goodness and communion with others for the sake of common growth are the factors which we may use responsibly to satisfy our legitimate needs, material or otherwise, while respecting the intrinsic balance of the creation».

Benedict XVI is in continuity with this statements of his predecessors. He indissolubly links the care to creation to the car to human being. A proof is in the themes the Pope chose for World Day Peace: truth (In Truth, Peace, 2006), dignity of human being (The Human Person, the heart of peace, 2007), unity of human family (The Human Family, a Community of peace, 2008), the poverty issue (Fight the poverty, build peace, 2009) and finally guardianship of creation (If you want cultivate peace, protect the creation, 2010). This is the path: from human being, to the community of human beings, to the care human being must have to the freedom of the other, as stated in the last message for the World Day of Peace, Religious Freedom, a path to peace. From Genesis to Kyoto, attention is always focused on the human being. Ecology of nature, but of the man first.

2 Responses to The Green Pope, from Genesis to Kyoto