Vatileaks. Paolo Gabriele will be tried as a criminal. But this is not the end In memory of Carlo Maria Martini, a bishop who dared

Vatican communication, time for a change 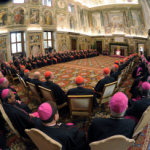 Should Vatican communication be overhauled? Perhaps this notion lead to the decision to appoint Greg Burke, formerly a reporter of Fox News in Italy, as advisor for communication of the Vatican Secretariat of State. In explaining his new job, Greg Burke said that it is «similar to the communication advisor of the White House». Greg Burke’s new post was hailed by many as the beginning of a new era in Vatican communication. However, one could reach a different conclusion, to judge by the Vatican Promoter of Justice (i.e. the public prosecutor) release of the Vatileaks indictment, and by the way that the decision to try the Pope’s butler, Paolo Gabriele, and the Secretariat of State computer specialist, Claudio Sciarpelletti, was released (Gabriele and Sciarpelletti are charged with releasing and connivance in releasing Vatican reserved documents, respectively). A casual observer could conclude that changes in Vatican communications are more cosmetic than anything else.  The case also shows how every press announcement can «boomerang».

Was releasing the 35 pages of the Vatican Court documents on Vatileaks in their entirety really necessary? Instinctively, one should say yes. Benedict XVI wants full transparency, with no shortfalls. The Pope has completely changed the way the Church speaks. He has focused everything – diplomacy included – on the Truth. Before, the Holy See used to whisper, and everybody was expected to sort out what was meant. Journalists –unacquainted with the subtle language of the Vatican, and unable to understand the dynamics of developments within the Sacred Walls – had to build trust relationships with inside sources, and what was published on the media was the result of these relationships. Not many official documents or press previews were provided. When they were, these official documents – for example, the balance sheet of the Prefecture for Economic Affairs – were explained in detailed press conferences.

Nowadays, the Holy See has embarked in a completely different path. Facing a sort of internal, self-destructive cannibalism that reveals itself in controversies and opposition to a Pope the «old guard» never wanted – for example, like it happened following the revoke of the excommunication of four Lefevbrist bishops – the Pope’s approach is to shed light on the truth. This approach may create some uneasiness. To institutionally present the facts as they stand opens the way to constructive comment. If before the Holy See whispered, today the Holy See – when necessary – clearly states what is that is really going on.

During these past months, there had been several examples that marked this change in the Vatican communication strategy: the publication – leaked institutionally to the prominent Italian newspaper Il Corriere della Sera – of the memorandum of the no confidence vote on Ettore Gotti Tedeschi, former president of the IOR Council of Superintendence; the almost daily briefings after Paolo Gabriele’s arrest held by the director of the Holy See Press Office, Father Federico Lombardi; and finally the publication of the decision to bring to trial Paolo Gabriele and Claudio Sciarpelletti.

This commitment to transparency does not seem to be complemented by a proper communication strategy. News tend to take a life of their own, supported by new revelations (if any) or by indiscretions. That the media can be biased in presenting the facts is to be expected, and – when possible – avoided. This has not been the case. Regarding the no confidence vote on Gotti Tedeschi, the «narrative» of the former IOR president is still alive and subscribed by the media, because the Holy See did not complement the publication of the memorandum with a solid and effective press briefing. The same «mistake» concerned the San Raffaele issue, i.e. the attempt to save from bankruptcy the hospital founded by Fr. Verzé. To date, public opinion does not understand why the Holy See would want to rescue this non-Catholic institution.  Few remember that the Holy See offer to buy the hospital was launched «hoping» to raise others’ interest in submitting even better offers. Under pressure from within – especially from the former IOR President Ettore Gotti Tedeschi, who now claims to be the only one who was against intervening to save the San Raffaele – the Vatican Secretariat of State considered the matter and made an offer in order to preserve this health facility, hoping and waiting for someone else to step in with a bigger offer.

Perhaps, one of the first signs of Greg Burke’s approach was the note – with pictures – published in L’Osservatore Romano, the Holy See daily, of a meeting the Pope held in his summer residence of Castel Gandolfo with the three members of the cardinal commission, cardinals Herranz, Tomko, and De Giorgi;  the magistrates of the Vatican tribunal; the deputy Secretary of State, Msgr. Angelo Becciu; and Georg Gaenswein, the Pope’s private secretary. These kind of meetings were once kept secret, or at least held discreetly. This transparency can be polluted with speculation on the presence/absence of some members of the Curia.  Cardinal Bertone, Secretary of State, was out of Rome on holidays, but his absence at the meeting was interpreted as prove that he is going to resign.

The same kind of mistake took place when the judicial proceedings documentation on Paolo Gabriele was published.

What is the image projected by the 35 pages of the indictment and the legal proceedings? First of all, Georg Gaenswein, private secretary of the Pope, seems to be the only party to blame, at the very least for naiveté. Being the only witness whose name appears in the documentation, Gaenswein does affirm that Paolo Gabriele was a mere executor of orders, a man who «needed to be told the same instructions twice», with no spirit of initiative. But Gaenswein also maintains that he felt he could trust Gabriele enough to give him some correspondence to deliver. Nothing strange in a small place like the Vatican, where everyone trusts everybody. But someone might malign: why is the Pope, undoubtedly an important person, surrounded by foolish and deceitful people? How are these collaborators chosen? And how was it that the Pope’s secretary failed to filter them out, and did not see Paolo Gabriele for whom he really is? These questions needed an answer, but they remained unanswered, wide open to the interpretation of journalists. There is another question: is there anyone who does not want to see Gaenswein defended and protected? And why?

There can be several answers, considering the various red herrings brought on by the media. But the 35 pages also provide another element to distort the scenario: the several omissis contained in the documentation – the names of witnesses are substituted with a capital letter which presumably is not a real initial. Father Lombardi said that it is easy to figure out who are the witnesses. For example, it would be easy to see when the Memores Domini – laywomen of Communion and Liberation that serve in the Papal apartment – are testifying  in front of the tribunal. But regarding the Memores, no one really knows who said what. And there is almost nothing known about the other witnesses.

There is a logical reason why the omissis are on the document: one or more of the people questioned by Vatican magistrates could eventually be charged during the trial,  or after there is a verdict, when the investigation turns to other aspects of the case. And so, the question is: was it necessary to publish the legal proceedings documents?

These «black holes» in Vatican communications can feed suspicions and conspiracy theories. True, the media should conduct itself responsibly. But there is also the need to manage communications, to come up with a media plan that prevents the black holes. Coordination among Vatican dicasteries is lacking. And maybe the sense of the importance of the Holy See in the world is also missing. News are now above all focused on Paolo Gabriele. But perhaps the media briefings of the Holy See Press Office could also cover other news. Why not talk about the diplomatic activity of the Holy See – almost unknown – or about the many Church activities that take place without much public awareness? And then, certainly, openly speak also about what is not working. But without giving way to communication “black holes”.