Toward a Church Revolution. The last fires of the three empires Hiv/Aids, a Vatican point of view

From Finland with love. Is Catholic thought going to be a minority to protect? 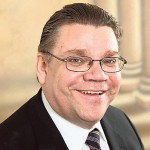 «Kyllä kansa tietää», «Yes the people know». This sentence has marked the history of Finnish politics. His author, Veikko Vennamo, was a talented orator. He shocked the Finnish political establishment by founding a populist party at the end of Sixties. It was called “Landsbygdspartiet” (the Party of the Countries) and it gained the 11,3 percent of the poll.

This is precisely the tradition that Timo Soini aims to perpetuate.  Soini is the leader of the True Finns, a political party that until recently was consigned to the sidelines of Finnish politics – in the 2007 general elections obtained a modest 4,1 percent of the vote – but that now is an upsurge that has taken the country’s institution by surprise, increasing to 17 per cent in four years. True Finns has so been elevated to a position on a par with the countries three mainstream parties: Kokoomus or the National Coalition Party, the Centre Party and the Social Democratic Party. And Timo Soini, the True Finns leader, is now a political star. And his political program is food for discussion.

Soini presents himself as the guardian of the interests of the little people and the opponent of the establishments. He affirms that Finland should abandon the Kyoto Protocol and that Church should oppose same-sex marriage. Soini is very careful to distinguish himself from racist, and often refers to his Roman Catholic faith – he converted to Catholicism when he was a student in the 80s – as proof of his conviction that all men are equal. Soini hobbyhorses are, in fact, Finnish withdrawal from the European Union and restrictions on immigration.

The ascent of True Finns did not pass unnoticed. Soini and his party had been accused of xenophobia and racism. European governments seem to be scared from this small party that raise votes from the people. Timo Soini has been depicted from the mainstream medias as a humorous, but foundamentally racist, person. But no one had looked in-depth at True Finns political program, and at Soini’s ideas and background. No one seem to have read the letter Soini sent to Wall Street Journal, «Why I Won’t support more bailouts». Soini’s party did not vote in favor of the bailouts of the euro-zone member states, since they are «patently bad for Europe, bad for Finland and bad for the countries that have been forced to accept them». Soini says that «Europe is suffering from the economic gangrene of insolvency, both public and private. And unless we amputate that which cannot be saved, we risk poisoning the whole body».

Soini contrasted the «official wisdom» that Greece, Ireland and Portugal have been hit by a liquidity crisis, so they needed a momentary infusion of capital. «The money – he accuses – did not go to help indebted economies. It flowed through the European Central Bank and recipient states to the coffers of big banks and investment funds .But the countries were forced to get the money, instead of the natural option: to admit insolvency and let failed private lenders, wherever they were based, eat their losses».

On October 2008, Benedict XVI affirmed that the world’s financial systems are «built on sand».  «We are now seeing – Benedict XVI said – in the collapse of major banks, that money vanishes, it is nothing. All these things that appear to be real are in fact secondary. Only God’s words are a solid reality».

Two years ago, the Holy See released the encyclical Caritas in veritate. In it, the Pope The pope rejects a laissez-faire economic philosophy which would treat the market as largely free-standing. Benedict specifically brushes off the idea that the economy has an in-built «quota» of poverty and underdevelopment required to function successfully. «The conviction that the economy must be autonomous, that it must be shielded from ‘influences’ of a moral character, has led man to abuse the economic process in a thoroughly destructive way», the pope wrote.

In fact, the diplomatic effort of the Holy See is focused on proposing a less bank-centered economy . they asked for a Third Chamber on Economical Issues in the United Nations – and more multilateral relationships among States. The vision is the one of the Social Doctrine of the Catholic Church, that recently Cardinal Rodriguez Maradiaga defined «the best kept secret of the Church».

Maybe, Social Doctrine can be also considered the best kept secret of the world. Many had been the efforts to read the Social Doctrine of the Church from a laissez-faire point of view. On the other hand, there are people inside the Vatican that are considered “laissez faire” ideologists. One year ago, at the beginning of the Greek crisis, a private meeting took place at the Pontifical Academy for Social Sciences, inside the Vatican walls. Ettore Gotti Tedeschi, president of I.O.R. (Institute for Religious Works), Mario Draghi, then governor of the Bank of Italy (and now named president of the European Central Bank), the President of the Bank of Greece and very few Vatican official met to discuss what was up to do to save Greek – and European economy. Draghi talked about the need of a momentary infusion of capital on Greek economy. There was who – on Vatican side – agreed with him. But Catholic position was Soini’s one.

Why Soini is so put under attack? The question had been hanging around in Vatican corridors. The words of Pope on religious freedom («Christians are the most persecuted religion in the world») are always remembered. The feeling is that Catholic thought, even – and especially – if it goes to the heart of the problems, and put in discussion what the (no importance wheter it is Old or New) World Order decides for international issues. And the accusation of racism to Soini are considered on a par with Hungarian issues. The Hungarian new constitution had been released, and it had been accused to be racist and xenophobic. Sometime later, the Commission Justice and Peace of Hungarian Episcopal Conference changed its name in Justice and Peace, and this choice had been considered linked the new Constitution issues.

Finnish and Hungarian cases, on the other hand, show another side of the truth: if two parties of Catholic roots are able to get such percentage of votes, it means that people have the need to refer to Catholic values. The resurgence of religions is now taking place. Soimi understood it, and intercepted the discontent of religious groups, and – in the name of common interests, and without exception (he addressed to Catholics, Protestants, Muslims, Jewish) – he gathered all religions under the umbrella of shared values in the name of common good. A sort of Alliance of the Sacred, that John Paul II himself promoted to weighs on in international debates.