Ior. A backward scenario. Spain, is it a kind of religious war bullettin?

Game over for Ivory Coast? 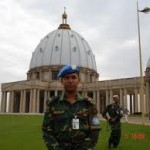 «Stop the bloodshed. Let the peace process begin». It’s the 6th of April 2011 and while Pope Benedict launches this last appeal for peace in Ivory Coast, Cardinal Peter Kodwo Turkson, president of Pontifical Council for Justice and Peace, was flying back to Rome from Accra, Ghana. Sent by Pope Benedict one week earlier to mediate between the conflicting parties in Ivory Coast, he hadn’t even managed to set foot on Ivorian territory. Airports had been shut down because of the riots, and Turkson wasn’t even allowed a special diplomatic permission – a nice way to intimate the Catholic Church to stay out of this conflict.

«The real president in Ivory Coast is called Nicholas Sarkozy», roars Martin Nkafu, lecturer and expert  in History and traditions of Africa in the Pontificia Università Lateranense in Rome. In Ivory Coast, his vision is shared by many. In fact, the French political choice to employ their special forces to back Alassane Ouattara -the president elected to replace Laurent Gbagbo- did not pass unnoticed. It was the French special forces to capture Gbagbo and lay power in Outtara’s hands, thus terminating a conflict started when Gbagbo refused to recognise his opponent’s election. It had been a violent conflict, like all those fuelled by ethno-religious reasons.

The classic analysis of the Ivorian conflict opposes three big ethnno-regional ‘blocs’, each represented by a party and a director: the Akan East and the Baoulés, represented by Houphouet-Boigny and his self-proclaimed successor Henri Konan Bedié with the Ivory Coast Democratic Party (Pdci) ; the Krou West, gathered around the Beté core, represented by Gbagbo’s Ivorian Patriotic Front (Fpi); eventually, the northern Dioulas, politically represented by Outtara’s RDR.

Handy as it might be, this analysis is heritage of a nineteen-century colonial interpretation, where every ‘political chief’ has his own ‘ethnic weight’ inside a ‘regional bloc’. Actually, it’s more complex than that. Ivory Coast is, in fact, a country largely made up by immigrants. The pretext  behind Gbagbo’s refusal to leave power was that the four Northern regions where Outtara had gathered his landslide victory are made up mainly by immigrants from Burkina Faso. Moreover, Outtara’s tribe itself is originally from Burkina Faso -and hence the pretext, even if the election was regular according to all the observers of international organization.

The presence of the Catholic Church in Ivory Coast is extremely strong. It’s from the Church, in fact, that the Ivorian education system stems from, and all schools are Catholic. Moreover, the largest exporter of cocoa in the world needs a ruling class at least able to manage business deals with the First World. Therefore, Ivorian managers receive their education in Catholic schools, and show great respect for Catholicism too.  That’s why both Outtara and Gbagbo turned to Mons. Jean Pierre Kutwa -the highest ecclesial authority in Ivory Coast- looking for support.

It is for this reason that the former president Boigny had wanted the ‘St. Peter of Africa’ to be built in Yamoussokro. The cathedral (the Basilica of Our Lady of Peace) in the forest should have clearly and wholly reminded St. Peter’s and should have embellished the new Ivory Coast capital -even though Abidjan retains the title of administrative capital. John Paul II too went there on a visit, where he made clear that the Church is anywhere, yes, anywhere but in ostentation. It is necessary to say that, on that occasion, the splendour of the cathedral on the one side contrasted with a starving poopulation on the other.

Not many in Europe reported on the Ivory Coast situation. In Italy, it only happened when the Holy See itself took a stance – a thing that proves, according to a Holy See official, that «if the Catholic Church makes the right move, it is able to influence public opinion. Something that didn’t happen, for example, in the case of Libya». It was Catholic Church that reported the mass murder in Ivory Coast and condemned the massacre. A condemn that costed a heavy price to Catholic Church . The Osservatore Romano wrote an extensive article  about the situation in Ivory Coast on April 14, with no spare of criticisms. As Pierluigi Natalia wrote, «war in Ivory Coast, one of the few countries where colonialism was followed by decades of peace, only started after the price of cocoa slumped. That followed the international decision to decrease dramatically the percentage of cocoa needed for products to be sold as chocolate».

Therefore, cocoa. As observers note, this civil war as well only started when Gbagbo nationalized cocoa, therefore limiting the French economic domination. It was then that the Northern part of the country, different from the rest for ethnical and religious reasons -being ethnically burkinabe and religiously Muslim- saw the start of a very little ethnic or religious revolt. In 2004, when Gbagbo’s army had almost succeeded in defeating the rebels, “Chienrac”’s France -that’s how they used to call him- decided to intervene with an ‘interposition’ force. Actually, that resulted in an occupation which helped saved the rebels’ army, with over 60 dead among the Abidjanian population.

Is it France again behind Outtara’s election? Many would say so, nevertheless the election were regular and cardinal Turkson himself asked Gbagbo to accept electoral defeat. Mainly, the French have intervened heavily in the conflict with the Liocorne mission, besides the Onu Onuci mission. As in Libya in Ivory Coast, France has imposed itself on Africa through strong regional politics, but without formally breaching national sovereignty. Similarly as well, rebels were armed and supported for humanitarian initiatives. It is a ‘grey’ situation for international law, where it is difficult even to identify the role of a mediator. Could the Red Cross mediate between parties, organise prisoners’ exchange, help define a truce, while one among the conflicting parties thinks they are playing the role of the Red Cross themselves?

It is in the light of this international law’s paradox that we can read the failure of Card. Turkson’s mission, while the French hail the victory of humanitarian militarism. According to psychologist Slavoj Zizek «the problem in humanitarian militarism is not in the militaristic, but in the humanitarian part. Military intervention, in fact, is always presented as a humanitarian act, directly justified by de-politicized and universal human rights. Those who disagree not only take the enemy’s side in an armed confllict, but also make a criminal choice, excluding them from the international community of civilized countries».

There are no more ‘regular’ conflicts between sovereign states, but only ethno-religious conflicts which violate universal human rights, but these don’t count as true wars. Ivory Coast, after Gbagbo’s golpe and the war against the rebels, had reached some sort of pacification thanks to the Ouagadougou peace accord in 2007. That peace was working as it was based on an ‘internalization’ of the conflict. The main actors of the crisis, in fact, were focussed on the Ivorian situation and opposed those internationalizations attempts on the part of foreign powers -Burkina Faso was, this time, the only sponsor of peace. In Ivory Coast, some put on the same level the French influence, the Expedition corps,  the UN and so on. Already in 2006 Gbagbo had, in the name of national sovereignty, prevented a UN resolution to be adopted. Such resolution, inspired by the French, was deemed to strengthen the power of the then prime minister Charles Konan Banny, supported by the ‘international community’. Gbagbo then fought with a previously unreleased weapon: the Constitution, approved in 2000 with a referendum and suppported almost unanimously by the political forces, and in particular by Ouattara’s Republicans.

The Holy See’s stance is directed towards the respect of internal dynamics and a -convenient to all- peaceful resolution. The idea is to lead the African problem back to the Africans, and to make human dignity an universal thing, without any particularisms. This time, though, mediation was not possible. And Turkson left Africa without even having the possibility to set foot in Ivory Coast.

3 Responses to Game over for Ivory Coast?