From Norway with hate. Why was Breivik depicted as a Christian fundamentalist? The Holy See toward financial transparency. With some contraindication.

The fall of the false gods. International finance between Christ and Confucius 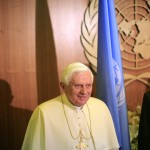 We are now living the fall of the false Gods. Benedict XVI delivered an important meditation at the beginning of the October Synod of Bishops for the Middle East. The meditation addressed the “false divinities” that govern modern times. «Let us remember all the great powers of the history of today. Let us remember the anonymous capital that enslaves man which is no longer in man’s possession but is an anonymous power served by men, by which men are tormented and even killed. It is a destructive power that threatens the world».

The international scenario is not encouraging. The United States avoided the default thanks to the debt ceiling agreement, but the credit of the United States had been first downgraded by the Chinese rating agency  Dagong  and then downgraded by Standard&Poors. In the meantime, the Holy See is working intensely to outline a reform of the world monetary system.  In the encyclical Caritas in veritate there were several points remarking it. One above all, the so-called world political authority paragraph. There is the need of a true world political authority – the Pope wrote – «in order to arrive at a political, juridical and economic order which can increase and give direction to international cooperation for the development of all peoples in solidarity. To manage the global economy; to revive economies hit by the crisis; to avoid any deterioration of the present crisis and the greater imbalances that would result; to bring about integral and timely disarmament, food security and peace; to guarantee the protection of the environment and to regulate migration».

A new monetary system could not prescind from a global authority, an authority – an official to the Holy See explains – that «needs to have universal competences and needs to be public». The next G20 – scheduled in Cannes for November, 3-4 – will be on financial markets and world economy. It will be the occasion, for the Holy See, to present his proposal to reform the international monetary system. A first sketch of the reform – now under the examination of Holy See consultants and officials – had been proposed by Michel Camdessus, former president of International Monetary Fund. Camdessus is a consultant of the Holy See, but it will also be a member of the French delegation at G20. France is also the hosting country of the summit. For this reason, there is the opportunity that the proposals of the Holy See will  be at least taken in serious consideration.

Facing the global crisis, many countries began thinking about a reform of the monetary system. Nicolas Sarkozy, president of France, talked about enlarging the G7 to better manage currency markets, expand the International Monetary Fund’s oversight capacity in the field, and to the IMF’s currency basket, Special Drawing Right (SDR),the currencies of emerging economies, like the Chinese yuan. «France supports modifying the IMF’s status to expand its oversight capacity», Sarkozy he noted. This can counter what the president of France views as a «proliferation of unilateral measures during crises resulting in a new financial protectionism in which all economies suffer».

The Holy See will make different proposal. The Vatican diplomacy expressed several times doubts about G20 and the international congresses of that kind, considered something more than a club of friends, with no executive power. Holy See asked for a World Government, since it knows that there is the need of an authority over the State sovereignty and with the goal of the common good. The proposal will be different even from the Camdessus first sketch. Camdessus position is more similar to French one. France – and many other countries, as well – think to a world currency in order to have a concrete currency to refer to. Since the dollar is not convertible in gold, it has no real reference in the economy. The solution the G20 is up to give can be just the one of a financial adjustments decided among the few that will met in Cannes. This – according to Holy See position – is not sufficient. In 2009, the Holy See asked the Doha round to be enlarged to the opinions of the excluded countries. This is still the Holy See position. The reform of the monetary system pass through the reform of the United Nations and the reform of International Monetary Fund. The true fight is between the world leaders that still think that the world order could be managed in restricted meeting and the ones that aim at a true multilateral policy. Camdessus first sketch was going toward the first position. Holy See is going in another direction, and its polar star is the common good of peoples.

It was the common good the goal of the delegation that gathered at Mount Washington Hotel, in Bretton Woods, New Hampshire, in 1944. Preparing to rebuild the international economic system as World War II was still raging, 730 delegates from all 44 Allied deliberated to abandon the Gold Standard – the monetary system based on the convertibility of all the currencies in gold – and to embrace a more appropriate system for capitalism. In fact, the new international monetary system was a return to a system similar to the pre-war gold standard, only using US dollars as the world’s new reserve currency until the world’s gold supply could be reallocated via international trade.

Two projects of a new monetary system had been discussed in Bretton Woods. The first project was by the English economist John Maynard Keynes. Keynes outlined the institution of a Central World Bank, in order to intervene on the markets to regulate the relationships between debtors and creditors. The bank was supposed to have its own currency, that Keynes called Bancor. The second project was by Harry Dexter White, under-secretary of the Us  Ministry of the Treasure, and outlined a simple leveling-off fund of tax exchanges. The result was a compromise: the economic policies of the State would be coordinated by the International Monetary Fund and from the World Bank; the dollar become the only currency convertible in gold, so having a central role in the economical system.

But Europe – and in particular Germany – lived an incredible economical growth. Always more creditors asked to convert their dollars in gold. In 1971, the Us president Richard Nixon unilaterally suspended the convertibility of Us dollars in gold. It was the end of Bretton Woods. It was the beginning of a variable economy world. The yellow gold was up to be substitute by the black gold, the oil – during the Seventies the oil crisis became a central topic of financial issues.

Here and then, the idea of a world currency letted out from the think-rooms of the Council on Foreign Relations, of Trilateral commission – a group founded by David Rockfeller in 1973, whose member are, or has been, Henry Kissinger, Zygmunt Brzezinsky, George Bush sr., Dick Cheney -, and of Bildeberg Group. In 1988, The Economist – an English magazine read with much attention even in the Vatican Secretariat of State – launched the idea of a world currency named Phoenix. The International Monetary Fund created in 1969 the “embryo” of a new kind of currency, the Special Drawing Rights (SDR). SDRs are not credits the State have with the International Monetary Fund. The State, on the other hand, can sell SDRs, so sustaining their own currency. The world currency auspicated by president Sarkozy would be, in some way, and evolution of SDRs. Something similar to the “bubble that will save us” outlined a couple years ago by Ettore Gotti Tedeschi, president of the I.O.R. (Institute for Religious Works, the “bank” of the Vatican), in an article on the Holy See’s daily Osservatore Romano. Something similar to what the Trilateral Commission outlined in 1989 in a report titled: “International Financial Integration: the Policy Challenges”.

The Holy See looks beyond, conscious that nowadays international finance is made up of fictitious capital. The Holy See aims to re-anchor the international monetary system to the real economy. In fact – officials of the Roman Curia underline – it was not globalization to let multinational groups and private interests take the control of global economy. It was the States to abdicate part of their sovereignty in the name of profit, and now they are stuck in the system.

In the mean time, China downgraded the United States financial rating, and this caused the fall of Western stock exchanges. Until now, China has always been marginalized by the Western economic world. But now its economy has so flourished to let the China “fire” all European and American bonds without consequences in their internal balance. China is now claiming for more weight in the international issues. Somebody is wondering – it is just an attractive hypothesis – if it was the Chinese offence for having been marginalized in the international scenario at the origin of the exacerbation of the Chinese diplomatic relationship with the Holy See.

The Holy See have a great International prestige. Neverthless the See Change campaign, the Holy See is Un Permanent Observer with reinforced powers. Every time the permanent observer speaks during the general assembly, even the sleepiest among the delegates pay much attention to the Holy See Statements. Holy See is now one of the few – if not the only one – asking for a really multilateral international policy. And it was one of the first to preview the fall of the false gods.