What will be Pope Francis’ diplomatic doctrine? Ambitions for the Secretary of State position, behind pressures to abolish the IOR

A different kind of Easter 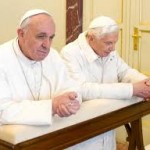 The image of the two white-dressed pontiffs praying together at the Pontifical Villa of Castel Gandolfo marked in some ways the handover from Pope Benedict to Pope Francis. This Easter was witness to this  handover.  We can see in it an element of continuity and another one of strong discontinuity.

The element of continuity was the meditation for the Via Crucis of Good Friday, which by tradition takes place at the Coliseum, in Rome. The meditation is a Benedict XVI’ legacy, his  «prophetic gesture», as the Lebanese cardinal Bechara Rai has noted. Benedict XVI took the decision to entrust to a group of young Lebanese the drafting of the meditation right after his trip to Lebanon. Lebanon is considered a “virtuous country” for its cohabitation of religions, especially taking into account the difficult times Christian minorities are experiencing in Arab countries.

The huge number of young people (Christians together with many Muslims) meeting him in Bkerké was equally influential in Benedict XVI’s decision. When he saw Christians and Muslims together, Pope Ratzinger was convinced that there was merit in the Lebanese model. So, he asked cardinal Bechara Rai to coordinate a group of young people to write the Via Crucis meditation.

The Via Crucis began with a reference to the «many Pilates» of the contemporary world, who hold power and use it to benefit the strongest. It is a world – we are at the second station – which «yields to an environment which tries to expel God from man’s life». Thus, a prayer is elevated so that «human reason will not be satisfied with science’s partial truths, » and to «overcome prejudices and hatreds that harden hearts and bring about religious conflicts.» The meditation for the ninth station is dedicated to the wound of the division among Christians. So, a prayer is elevated so that «the children of the Eastern Churches – afflicted by several difficulties and sometimes even by persecution, and weakened by outward migration» will have «the courage to remain in their countries to announce the Gospel.»

Ultimately, these are Ratzinger’s themes. Pope Francis inherited this legacy.

Yet, he will certainly live up to it on his own terms. Since the beginning of his Pontificate, Francis has made it a point to underline that he is the bishop of Rome. But – and this represents a discontinuity – he surprisingly decided not to celebrate the Holy Thursday Mass (by tradition, the Pope celebrates that Mass for his diocese of Rome) in Saint John the Lateran Basilica (the Pope has still not taken possession of it) or in Saint Peter’s Basilica. Pope Francis chose to celebrate the Mass of Holy Thursday in the juvenile detention centre of Casal del Marmo.

The Pope came up with the idea to celebrate there the Missa in Coena Domini (Mass of the Last Supper) following an invitation by Paola Severino, the Italian Minister of Justice, who has made reforming Italy’s prison system a top priority of her tenure.

It was the first time a Pope celebrated Holy Thursday Mass in a juvenile detention center. Cardinal Bergoglio used to celebrate the Messa in Coena Domini in the most needy places in Buenos Aires, such as a prison, a hospice or a barrio.  Since the pre-conclave meeting, he has been saying and preaching that Jesus must be brought to the (marginalized) peripheries.

Pope Francis urged the young detainees «not to let anyone deprive them from hope,» and he delivered a homily in his plain oratory which seemingly has already won the world over. «Jesus – he said – teaches us to love one another, and I heartedly do so since it is my duty: as a priest and as a bishop, I must be at your service.»

This duty – the Pope said – «comes from deep in my  heart, and I love doing it because the Lord taught me to do so.»

After the homily, Pope Francis washed the feet of twelve young detainees. Among them, two girls. One of them, Muslim. «It was a very intense moment,» Father Federico Lombardi, director of the Holy See Press Office, commented.

This is how Pope Francis carries on to bring the Church to the world, and to make it a Church as little self-centered as possible. This is what he took notes about, while preparing the pre-conclave meetings. Notes later circulated by cardinal Jaime Ortega. Perhaps, these notes and the speech he delivered afterwards are the key reason for his election as Roman Pontiff.