How will Pope Francis go about it? To start, by loving his enemies. Pope Francis and the risk of trivialization

Pope Francis appointment of an advisory board raises expectations for reform 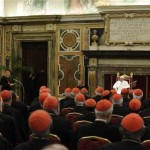 It is a sort of advisory board for Pope Francis. Eight cardinals, and a bishop as their secretary, will meet periodically to infuse energy to the Curia reform that the cardinals asked for, during their pre-conclave meetings.

Criticism of «Roman centralism» came from the cardinals farthest away from Rome, in the outer rings of the Church. The Vatileaks scandal increased a lack of trust for the Roman Curia. Jorge Mario Bergoglio himself – later elected Pope – focused his remarks during the pre-conclave meetings on the need to be less self-referential and to proclaim the Gospel, and this was one of the main reasons why the cardinals’ votes at the Conclave – even those from North America – went to him. Will this reform, by these eight cardinals, correspond to what the cardinals had in mind when they elected the Pope?

On the day marking the first month of his pontificate, Pope Francis has started the overhaul of the Curia. He has done it in a visible way, choosing eight cardinals he trusts and a bishop to assist them, bishop Marcello Semeraro, who runs the diocese of Albano (where the Papal summer residence of Castel Gandolfo is located).

Francis’ move has been noted in the media, seemingly as intended. Popes often asked their main collaborators, who are the cardinals, to advise them. There is nothing new about this. But the fact that the “working group” appointment has been announced with great pomp and circumstance (the Vatican’s equivalent of bells and whistles) highlights and makes it clear that Pope Francis may want to revise the Pastor Bonus, the apostolic constitution that regulates the functioning of the Roman Curia.

The «wise cardinals» are already and in touch with the Pope and getting ready for their first meeting, scheduled from October 1st to the 3rd.

Francesco Coccopalmerio, President of the Pontifical Council for Legislative Texts, is not one of the wise cardinals. This is noteworthy: during the pre-conclave meetings, Coccopalmerio outlined to the cardinals a Curia reform meant to make it more efficient.  His remarks were so well-received that he became the most-voted Italian cardinal in the conclave. Was his project dismissed? Or is it just that Pope Francis don’t want anyone from the Curia in his working group?

The eight cardinals represent the five continents. First on the list is Giuseppe Bertello, the head of the Vatican City State administration. Very close to Pope Francis – they met while the cardinal was serving as papal nuncio in Latina America – Bertello is considered by many a possible future Secretary of State.

Francisco Errazuiz Ossa, Chilean, born in 1933, brings with him his long experience as former archbishop of Santiago. Oswald Gracias, 69, Indian, is the Archbishop of Bombay, and comes from a country where Catholicism is alive, active and prone to misguided theologies: some officials of the Congregation for the Doctrine of the Faith who used to visit India defined their field work there as “difficult”. Gracias is president of the Indian Bishops’ Conference, which brings together all the Catholic bishops of India regardless of their rite (in India, there are three Catholic rites: Roman, Siro-Malabarian, and Siro-Malankarian).

Europe is represented by Cardinal Reinhard Marx, Archbishop of Munich and Frisingen, well-known for his books and statement on the Social Doctrine of the Church. Marx’s views had not always been shared by George Pell, the Archbishop of Sydney. Pell spends a lot of time in Rome and had a lively exchange of opinions with Marx in a recent meeting. Since Pell is also part of the working group, it will be interesting to see how the two work together.

Cardinal Mosengwo Pasinyia, from Democratic Republic of Congo, has earned praise and esteem, and was chosen to preach the Lent spiritual exercises to the Roman Curia. Sean Patrick O’Malley, Archbishop of Boston, will bring to the working group a taste of North America: he is already familiar with Curia machine, because he worked with the Roman Curia to fight clergy abuses in his diocese.

Cardinal Oscar Andrés Rodríguez Maradiaga, Archbishop of Tegucigalpa (Honduras) will be the coordinator of the group. He is a close friend of Francis, and he was one of the first cardinals to have lunch with the newly elected Pope. Maradiaga does not work in the Curia, but he is President of Caritas Internationalis, and knows very well Rome’s politics.

It is noteworthy that no one from the Roman Curia have been appointed to the working group. The only (partial) exception is Bertello, who holds an administrative position at the Vatican.  Will cardinals outside the Curia be able to reform it even if they do not know how its system works?

Finally it is striking that the Pope appointed this ad hoc commission of cardinals, when cardinals are already entrusted with the responsibility of supporting and advising the Pope.

Some maintain that, in fact, the eight cardinals are a working group, more than an advisory board. According to this view, the Pope would rely on his “ministers” to structure the Church’s political-institutional framework. On this basis, the ministers would also sketch a plan for Curia reform, which the experts would put into effect.

The Pope, in fact, has a wide-array of tools to bring about a reform of the Curia. For example, he could write a four-line Motu Proprio letter to abolish the Curia altogether, or he could redesign it with a more structured pastoral constitution.

Appointing a working group of this kind also reveals the wish of Pope Francis to give the Curia a more «shepherding» profile. Many are convinced that, soon, the cardinals who are presidents of the Pontifical Councils will be dispatched as archbishops to different dioceses, and that just a few berrette rosse will remain in the Curia.

This would be the first step toward a streamlining of the Vatican bureaucracy and the underscoring of the pastoral mission of priests.

Many commentators pointed out that the selection of the cardinals was reached collegially. In fact, this does not seem to be the case: Pope Francis personally appointed the members of this working group, and they report only to him. It is not a selection Pope Francis made in consultation with other bishops, even if the official communiqué explains that he acted «following suggestions from  the pre-conclave meetings.»

In fact, when, if and how Pope Francis will convoke a synod will tell us much more about how he views collegiality. In that regard, it will be equally interesting to see if Pope Francis will take on board Paul VI’s old idea of including among the Pope’s electors, along side the voting cardinals, the fifteen members of the Synod of Bishops’ permanent committee.

Since the cardinals will be in touch with the Pope and will help him to govern the universal Church, a question remains: Was Pope Francis elected to be the agent of a reform conceived by the eight cardinals, all of whom had been among his main electors? Or did the Pope decide to delegate power, so he can focus on that which he loves most, to be the world’s  parish priest?