Pope Francis on the path of reforms Divorced and remarried, the perils of a discussion run by the media 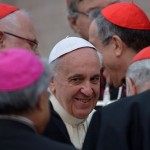 Watch, judge, act. These are the three steps put into action by Pope Francis. After almost one year of pontificate, Pope Francis has decided on a way forward on how to reform the Curia. Those who were thinking of a wide reform, built on a solid legal framework, will be perhaps disappointed. Pope Francis seems to have taken the decision of changing everything without waiting any longer. And of starting the Curia reform without reforming the Pastor Bonus, i.e. the constitution that regulates the functions of the offices of the Curia. Rather, Pope Francis is going to directly establish a parallel Curia. When this parallel Curia is complete, he will probably let all the other structures wither away.

This development is informed by two decisions Pope Francis has taken and is reportedly going to take. The first, that of establishing an Secretariat for the Economy. The second, that of appointing Cardinal Giuseppe Bertello as ‘Moderator Curiae’, i.e. a general coordinator of the Roman Curia.

The Secretariat for the Economy has been established via a “motu proprio” suddenly issued on February 24. This “motu proprio” involves a sort of aggregate of “tuning-ups” of the Holy See’s financial offices. The Secretariat for the Economy will be entrusted with the task of financial programming and issuing an annual balance sheet. Pope Francis will also appoint a general auditor, with the capacity of inspecting the accounts of any office in the Holy See and in of Vatican City State. He also established a new Council for the Economy, composed of 15 members (eight cardinals or bishops, and seven laymen). At the moment, only the prefect of the new secretariat has been appointed: it will be Cardinal George Pell, a member of the Council of Cardinals that Pope Francis appointed to developed a Curia reform plan.

Cardinal Pell will have a “number 2”, a general secretary. Although an official appointment has not been announced, reportedly the general secretary should be Monsignor Lucio Vallejo Balda, currently the number two of the Prefecture for the Economic Affairs of the Holy See and Secretary of the Pontifical Commission of Reference for the Vatican economic structures and administrations.

(editor note: despite any rumor, today March 3, Pope Francis appointed msgr. Alfred Xuereb as prelate general secretary of the Secretary for the Economy. Xuereb was already the Pope’s delegate at the two pontifical commission. Is the Xuereb appointment another move of Pope Francis to switch from external consultants to consultants from within?).

The offices of the new Secretariat will be at the Torrione San Giovanni, in the Vatican walls, and the new dicastery will be staffed with 15 people. The Torrione San Giovanni was restored by John XXIII (who wanted to make it his summer residence) and was used by Secretary of State emeritus Tarcisio Bertone as his apartment while the official residence of the Secretary of State was still occupied by his predecessor, Angelo Sodano. The Torrione was also the location of the last George W. Bush visit to the Vatican as President of the United States.

Only late in the day did Cardinal Giuseppe Versaldi arrive in the Apostolic Palace.  Versaldi is President of the Prefecture for the Economic Affairs of the Holy See.  He was seen wandering, wearing his coat, and carrying a suitcase, and with the semblance of a troubled man. Fabian Pedacchio, Second Secretary of Pope Francis, informally let it be known that Pope Francis would not be making any surprise appearance, because he was “holding meetings”.

The establishment of the Secretariat of the Economy also signals how Pope Francis wishes to carry out the reform of the Curia. While the Council of Eight cardinals discusses a reform of the “Pastor Bonus” and lays proposals on the Pope’s desk, Francis is taking action. Reforming the Pastoral Constitution would take a lot of time: experts in canon law would be required, who would need to study in detail how to carry out the reform. Pope Francis is in a hurry. He wants to streamline the Curia and make it work, thus creating a new model for the Church.

This is the mandate he was given by cardinals during the General Congregations, i.e. the pre-conclave meetings. Pope Francis did not only make the intervention that became famous after Cardinal Ortega y Alamino shared it. He did not just speak about reaching out to the peripheries. He also gave voice to the concerns of nuncios and cardinals. He once underlined in an intervention that it was not right that Papal nuncios were not received by the Pope, as was the case under Benedict XVI’s pontificate. He outlined the need for a Curia at the service of bishops, not a central authority, thus addressing the feelings and dignity of the peripheral Churches and also of the ‘gang of diplomats’ who felt to have been pushed aside under Benedict XVI’s pontificate. The cardinals in conclave ultimately voted for a government program that Pope Francis must now carry out.

At one point, it was thought best that the diplomatic functions of the Secretariat of State (the “Second Section”) be kept separate from the management functions of the general affairs section (residing in the “First Section”). However, the reform proposal of Cardinal Attilio Nicora at the beginning of 2005, shortly before John Paul II’s death, became alive again. Nicora’s draft was considered ferocious: the project was to incorporate all Pontifical Councils within the Congregations, and to entrust the Secretariat of State only with diplomatic tasks, while the general affairs of the Church were to be handled by a Council of Cardinals.

Pope Francis actually went beyond this reform concept. He made up his mind following his many daily meetings (many more than those officially scheduled), and in the end he decided to make of the Secretariat of State a Curia office like any other. The establishment of a Secretariat for the Economy, which name denotes that it is on par with the Secretariat of State, is just the first step. Attentive observers believe that Pope Francis will establish several secretariats, at least eight, and the prefects will be the cardinals of the Council of Cardinals.

All of the new secretariats will be directly under Pope Francis, as the Secretariat for the Economy is. The Secretariat of State will not be a linking and coordination office anymore.

This is why a “Moderator Curiae” is needed.

Cardinal Francesco Coccopalmerio, President of the Pontifical Council for Legislative Texts, was first to raise the notion a Moderator Curiae. A very skilled law expert, Cardinal Coccopalmerio introduced this concept to the General Congregations together with his own ideas for reform. It was a precise program.

In Cardinal Coccopalmerio’s vision, the “Moderator Curiae” would have the tasks of optimizing work and coordination, taking care of human resources, requests from the dioceses, the organization of meetings, spiritual care, an the permanent review of the workings of the dicasteries.

This project of reform gained a lot of support in the conclave. According to rumors, Cardinal Coccopalmerio had been the  most-voted Italian cardinal in the conclave because of his views.

In practice, the Moderator Curiae, a post that will be possibly taken by Cardinal Bertello, will be a sort of deputy Pope. It is a sensitive post, key in keeping an equilibrium in the parallel Curia designed by Pope Francis. A Curia, it seems, that the Pope thinks should become the official Curia. The Congregation and some of the Pontifical Councils already confirmed will be eventually turned into departments, without any decision-making  authority.

The Vatican freeze on hiring –decreed several weeks ago and justified on an economic crisis which does not seem to affect the hiring of expensive external consultants– had been considered a sign that new consolidations of Vatican dicasteries were on the way (thus the redundancy of staff). More likely, Pope Francis wants to promote new approaches to hiring, going beyond the “old boys club system” that in the end did not work anymore.

The reform is evolving without a new pastoral constitution, nor the amending of the Pastor Bonus. Even the motu proprio regarding the Secretariat for the Economy underscores that this Secretariat  is established as a «dicastery of the Roman Curia according to the Pastor Bonus,» but fails to specify – as it should– where is it that the Pastor Bonus is to be amended to make room to this new dicastery.

In the end, Pastor Bonus has already been overtaken. Pope Francis does not want to waste time. He was elected with a clear mandate, and he wants to carry it out. When he was archbishop of Buenos Aires, he used to say: «When a bad thing is identified, a surgery to remove it is needed, promptly.» This is his idea of the Church as a field hospital. Are the wounds really that deep to conclude that so many amputations are needed?