Pope Francis, here is why the China deal can be soon superseded Synod 2018, will the Synod fathers be able to place the Eucharist at the center? 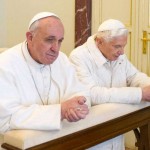 The importance of the third Synod of Pope Francis’ pontificate seems not to be in the topic of discussion, but rather in the fact it takes place when Pope Francis himself confirms that the Church is under attack and is asking all the faithful to pray the Rosary every day in the month of October, and to recite every day Leo XIII’s prayer to St. Michael the Archangel.

Not by chance, a tapestry depicting St. Michael the Archangel triumphing over the dragon was displayed on St. Peter’s Basilica façade during the Oct. 3 mass that kicked off the Synod of Bishops. And not by chance this Synod was preceded by a series of indirect references to specific issues by Pope Francis, especially in his morning homilies in the Domus Sanctae Marthae. This series of references addressed the issue of attacks and criticism being ever more publicly raised.

Over the last few weeks, Pope Francis has praised silence, said that the first step for conversion is accusing oneself and not the others, affirmed that prayer and humility save bishops from the devil, asked Shepherds to be humble and mild like Jesus was, and underscored that the devil takes advantage of hypocrites.

In his opening speech at the Synod of Bishops, Pope Francis also underlined that “frankness in speaking and humility in listening is needed.” Criticizing is okay, but it is also important that criticism be “honest and transparent,” since only thus are critical opinions constructive and helpful, while “idle chatter, gossips, innuendos” are not of any help.

The key issue is, in the end, the fight against the devil. Pope Francis perceives that the Church is stricken by a bloody war, and that this fight is aimed at fomenting internal divisions.

It is striking that the push for prayer is not fully appreciated. Yet, this aspect exists. Pope Francis, for example, also asked the Synod fathers to pause in order to pray and reflect for three minutes every two five-minute interventions. And, above all, Pope Francis decided to face the issue of a Church under attack in the ancient and proven way the Church has always taken: to fight the devil.

Nothing new under the sun, an attentive observer would say.

Benedict XVI, at the climax of the attacks against his pontificate after he lifted the excommunication of four Lefebvrian bishops, wrote a letter to the Bishops of the Catholic Church.

The letter ended with a quote of St. Paul’s letter to the Galatians. The apostle wrote: “Do not use your freedom as an opportunity for the flesh, but through love be servants of one another. For the whole law is fulfilled in one word: ‘You shall love your neighbour as yourself’. But if you bite and devour one another, take heed that you are not consumed by one another.”

Benedict XVI commented: “Sad to say, this ‘biting and devouring’ also exists in the Church today, as expression of a poorly understood freedom. Should we be surprised that we too are no better than the Galatians? That at the very least we are threatened by the same temptations? That we must always learn anew the proper use of freedom? And that we must always learn anew the supreme priority, which is love?”

These words testify, in the end, that an internal struggle within the Church, with a lively, even mad discussion, always existed. It existed also during the last pontificate. The notion that Pope Francis is enduring a particularly hostile environment because of his reform is not convincing. Even Benedict XVI was forcefully attacked for his decisions.

And it happened to John Paul II, too, and to Bl. Paul VI, whom Pope Francis will canonize Oct. 14.

To say it straight, as Benedict XVI’s letter shows, it already happened with the first apostles. This discussion is part of the Church. That same letter also bore a key of understanding that should not to be lost.

Benedict XVI reminded us, at the end of the letter, that Mary teaches us to have trust. She leads us to her Son, in whom all of us can put our trust. He will be our guide – even in turbulent times.”

Pope Francis’ request for the daily praying of the rosary bore in itself this reference to Mary, as it does Pope Francis’ devotion to Mary – since the beginning of the Pontificate, Pope Francis goes to pray before Maria Salus Populi Romani in St. Mary the Major.

The issue is whether these spiritual roots in Pope Francis’ words was understood. Since the very first day of the Synod, there is the impression that spiritual issues are not on the table. And that is the real knot of the issue at stake.

Archbishop Charles J. Chaput of Philadelphia hit the nail on the head when he criticized the working document of the Synod on Young People and reminded all there is a need for faith, rather than sociology.

The issue of faith was lacking in the pre-Synod discussion, and it seems to be lacking in almost all the discussions inside and outside the Church, since the Second Vatican Council.

The last heated discussion was generated by McCarrick’s case and followed by the two letters of Archbishop Carlo Maria Viganò. The debate showed that also bishops use a political vocabulary, and then take positions on one side or the other according to the “bite and devour” behavior denounced by Benedict XVI.

True, problems must be solved and mistakes must be identified. However, the discussion is generally flawed by a positive or negative prejudice and circumscribed to details. The abuse issue, that of the alleged openings in doctrinal terms, or Curia reform are in the end discussions influenced by a wider agenda.

The issue is not so much what to do with the Roman Curia, how to effectively tackle abuse, how to exercise discernment in the light of Christian doctrine without giving up on doctrine. The issue is rather what is the model of Church to shape, and why.

In many cases, Protestant mentality entered the Church, as well as the mentality of the effectiveness at all cost, and also the sociological mentality that is likely the real roots of the issue. In the end, was it not an excess of a sociological reading of reality at the basis of the doctrinal mistakes of Liberation Theology, that put the poor and the downtrodden at the center and set Christ aside?

Pope Francis’ request for prayers must be interpreted in this sense. Pope Francis should not be concerned by attacks from the outside, but rather by the way his collaborators interpret reality.

While Pope Francis asks for open documents, concrete pastoral responses and ask everybody to pray, Cardinal Lorenzo Baldisseri, general secretary of the Synod, opened the Synod saying that “young people long for an outgoing Church, committed in dialogue with the advancing modernity, and in particular with the world of new technologies, which must be recognized in their potential and used correctly.”

Cardinal Baldisseri also stressed that new generations “want to be main characters of the ecclesial renewal in action”, and “together with shepherds and adults, they wish to contribute to build a more evangelical, more courageous, more participative and more missionary Church.”

In the end, his words recall the style of a political manifesto drafted after a poll. They do not evoke the Gospel. Cardinal Baldisseri’s words come after he said he was not going to take out any of the references to LGBT individuals as a category, included in the Synod working document. Cardinal Baldisseri said the working document used the term LGBT because it followed the document issued at the young people’s pre-Synod. However, no trace of this reference was in the pre-document.

When asked about the issue, Cardinal Baldisseri said he was not going to change anything, and that the document had been published and discussed. This position shows the power of the general secretary, that is always more central in the Synod.

The new regulation made the structure of the Synod central, while the issue of listening seems mostly to be a pretext to justify any decisions in the name of a “moral unanimity” that does not conform with the notion of the Synod’s consensus.

Once again, Pope Francis’ requests were fulfilled according to a political, shortsighted perspective. It is easy to foresee that soon the structure of the Synod of Bishops will need to be redesigned.

The issue will not even be anymore what is that the Synod will approve in doctrinal terms in the name of the moral unanimity. The issue is how bishops will participate in the life of the Church, and how they will be able to transmit the faith.