A Pope, Nobel Laureate in Literature? 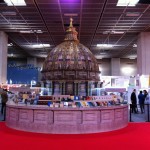 Pope Francis, some say, may be the first Pope to earn a Nobel Prize, for Peace. Only a few people know that, before Francis, the idea of proposing Benedict XVI for the Nobel Prize, in Literature, had been seriously considered.

Father Giuseppe Costa, director of the Vatican Publishing House, had this idea, as he recalled  during the International Book Fair in Turin, where the Holy See was invited as a special guest.

Under a St. Peter’s Dome made of books, surrounded by works of the Vatican Museum and of the Vatican Apostolic Library, Father Giuseppe Costa explained that, yes, he had thought about initiating a campaign to give Benedict XVI the Nobel Prize in Literature, and had reached out to some major universities to promote the candidacy. The project did not take off, and then Benedict XVI resigned. The rationale at the root of the idea, however, is still valid: religious literature is not a “class B” literature, it has gravitas and addresses a market demand. While a “Francis’ bounce” is noticeable in religious publishing, a review about the cultural work that preceded “Pope Francis’ bounce” is in order.

Continually in dialogue with cultures, Benedict XVI attracted interest on the part of secular readers, so much that Ratzinger’s books were discussed and read in non-Catholic circles. The presence of Ratzinger’s books favored a stronger presence of Catholicism in the cultural debate. Joseph Ratzinger’s books had worldwide distribution. For example, widely discussed was his analysis about a rootless Europe, published in 1992.  A time when the Treaty of Maastricht was about to bring to an end the Europe of subsidiarity, of Christian inspiration, and replaced it with a European Union mostly conceived as a financial institution. His interventions as Prefect of the Congregation for the Doctrine of the Faith had been widely discussed and even criticized, laying grounds for fundamental cultural dialogue.

After the big evangelization of John Paul II, the Pope of reason was called to reinforce the building blocks of the Church.  An appeal to the Church to recognize her own identity was much needed. Benedict XVI made that appeal. Also by ceding to the Vatican Publishing House the copyrights of the books he had published before being elected Pope. The decision had not come about by chance. It was part of a precise strategy of reinforcing the Vatican Publishing House, giving it the possibility to publish his opera omnia.

The Vatican Publishing House already controls the copyrights of the Pope’s statements, and it sells rights to their publication all over the world. There is a demand in the market for the words of the Pope. Every encyclical sells between 600,000 to 1 million copies. Every book written by a Pope will certainly be a best seller. Popes’ books are extremely profitable for the Vatican publishing house. Through these profits the publishing house can support other Catholic publishers and take a stand for identity, helping them not to be at a disadvantage vis-à-vis the big (and very rich) secular publishers.

Benedict XVI’s choice was ultimately a choice of sovereignty. Despite that choice, there had anyway been some controversial decisions: two of the three books of Benedict XVI’s trilogy on Jesus of Nazareth had been given to a secular publisher, according to a marketing logic more than to a logic of delivering a message. A choice that proves the weakness of a Catholic world that lives under a sort of inferiority complex toward the secular world, believed to be better in distributing, advertising, and selling. These are flawed justifications. The Catholic Church is not a company aimed at building consensus or skyrocketing sales.

At the Turin International Book Fair, the Catholic publishers Greg Erlandson (Our Sunday Visitor), Albrecht Weiland (Verlag Schnell und Steiner GmbH,) Henrique Mota (Principia) and Giovanni Cappelletti (Italian Catholic Booksellers) discussed the state of the art of Catholic publishing. All of them underscored that there is a strong demand for religious books, especially thanks to the Pope Francis’ bounce. All of them complained that the major works of Catholic writers are preferably sold to secular publishers with a broad presence in the market, rather than giving them to Catholic publishers that could use the profits from their publication to foster and reinforce their network.

It may seem to be merely a cultural debate. It is not. It signals a lack of vision. What is really missing are influential Catholics with an impact in society. At an international level, there are just a few countries where the ideas raised in Catholic Social Teaching carry any weight in the debate (even in the political arena), and when they have an impact, they are always under attack. Just think about what happened in Finland and Hungary in the recent past, where Christian leaders with Christian-inspired electoral programs have been accused of homophobia. From a European point of view, lobbies ideologically against the Catholic Church carry ever more weight and influence, as it was proven – for instance – with the approval of the Lunacek report (the “EU Roadmap against homophobia and discrimination on grounds of sexual orientation and gender identity.”) From an international point view, the Holy See is constantly under attack by the gender lobbies, that are even pushing the Church to change Church doctrine and canon law. On May 23, the final observations of the UN Committee Against Torture may follow this script once again.

It seems the Catholic world is standing by, watching these attacks with no cultural tools to fight them. The professionalization of Vatican communications (with expensive ad hoc advisors and external consultants now in charge of it) has not improved the quality of the debate because ideas to forge public opinion are lacking. Applying good communications techniques do not improve communications if the ability to give a real and deep content to the message delivered is still missing. The content can be deep only if it comes after an in-depth cultural movement nurtured within society.

Perhaps, the idea of giving a Pope a Nobel Prize in Literature should be considered again, in order to show the Catholic world that Catholicism is also a cultural challenge, to be lived and nurtured. And also to urge Catholics with the means to build up a Catholic network, to do so.

4 Responses to A Pope, Nobel Laureate in Literature?