A Sad Christmas without Piero Gheddo 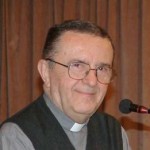 The news that Fr. Piero Gheddo passed away broke a few days before Christmas, and made Christmas time sadder. Fr. Gheddo was not only the tireless missionary who went to every corner of the world, following God’s design that he learned to recognize from his soon-to-be beatified parents. He was also a missionary who was always able to put Christ at the center. He was an example of balance between different ideologies.

He was a friend to Helder Camara, but he was not a liberation theologian. Instead he opposed any Marxist drift in Latin American theology. He was not anti-colonialist as were many missionaries, nor did he go in for ideologies, as his only ideology was the Gospel.

When the first Italian missionary magazine “Ad Gentes” shut down in 2014, Fr. Gheddo did not join those who were blaming others for the closure. Instead he looked at the roots behind the lack of interest in, and sales of, the magazine. The answer he gave was bitter, and in some ways even well known, in spite of the fact that no one had the courage to admit it: the magazine had lost its appeal because the missionary vocation had lost its appeal. And being a missionary had lost appeal because missionary work was permeated too much with “social commitment.” Yes, social commitment is very important, but it somehow detaches us from the main reason for the missions. One leaves home as a missionary to speak about Christ, and when Christ is removed from the center of preaching, neither civil rights struggles against poverty, nor social advocacy in the face of governments, can provide the real sense of the mission.

With his lucid analysis, Fr. Gheddo was also able to provide an indirect image of the world overall, providing thereby a snapshot of the Catholic Church. He could do that because he had experienced the Church at every level, as a special envoy for the Vatican newspaper “L’Osservatore Romano” as well as a missionary. In neither case did he fall into a one-sided perspective; instead, he viewed reality from the center, understanding that a sensitive analysis was better than an ideological one. He stood, in the end, with Christ, because in the end that was the reason he had become a priest and a missionary.

The analyses of Fr. Gheddo are contained in almost 100 books in addition to thousands of articles. They reveal an understanding of the current reality.

When Fr. Gheddo spoke about the need to put Christ at the center, he merely concretized the need to return to Catholicism. He thus entered into a debate opened already in the 1950s by Joseph Ratzinger in his paper “The New Pagans and the Church.” Even nowadays, Pope Francis asks that Christ be put at the center.

Although Pope Francis’s pontificate is considered to be missionary, the sum total of the discussions emanating from the pontificate in fact marginalize the idea of Christ, even in the Catholic media, which is frequently off-kilter in the balance between offering Catholics some kind of “lay homilies,” and adhering to the media’s responsibility to communicate facts.

What Fr. Gheddo understood while observing the closure of “Ad Gentes” is still valid: the message is missing. Since the Gospel is the message, there is a lack of substance in what was being offered. And this seems to be paradoxical in Pope Francis’s era, as it is difficult to find any other Pope more media-friendly and mediatized than him. The long bounce of Pope Francis’s mediatic presence should help to re-center the mission on Christ, as well as the communication of the same. But this simply is not happening.

This is the reason there is a constantly diminishing market for Catholic media. In Italy, two historical Catholic magazines have shut down in recent years, a third one had to re-tool itself with a lower profile, while “Famiglia Cristiana,” once sold in every parish, has lost a lot of subscriptions from the same Catholic world to which it was addressed.

In general, Pope Francis also seems to consider Catholic media as secondary choice. The Pope who prefers to reach out to the farthest corners in a manner attuned to the Gospel is, at the same time, not attuned to the Catholic media whose aim should be to spread the Christian message. The outcome is that Catholics live a sort of inferiority complex vis-à-vis the secular world. And the secular world takes it all: the monopoly of information and the delivery of leaked information.

Moreover, this leaked information is passed on through ideological filters, not with evangelical purposes in mind. Here as well, Fr. Gheddo set an example. He stressed that the only side for which one should stand was Christ, and that no ideology should corrupt the mission.

But is Christ really at the center in the mission of today’s Church? This was the question behind all of Fr. Gheddo’s writings. And this is a question to be posed while one looks at the situation of the Church in its entirety. There are great expectations for Curia reform, and yet the Curia is itself divided between good and bad people, whether they are considered pro- or anti- Francis. Terms like revolution and change have become central to talk about the Church today. No mention is made really of the millennial history of the Church, nor of the fact that no revolution can be undertaken without the Gospel, and that the only Christian revolution is the Gospel.

This is what Fr. Gheddo always said, even when working as a journalist. In addition to his position as a special envoy for “L’Osservatore Romano,” he was also an editor-in-chief of magazines and the founder of a press agency.

This must be remembered on this Christmas Day. At Christmas time, the announcement is the main issue. The coming of Christ is announced by the angel, and missionaries are nothing more than modern angels called to announce the coming of Jesus.

An apostle of the Gospel’s announcement has gone to heaven. He left behind his doubts and perplexities. He gave us the certainty that only in Christ is there real hope.