The Vatican: Looking To The Past To Understand The Present Pope Francis: A New Series Of Attacks Against The Catholic Church In The Offing?

A trip to Moscow for Pope Francis? 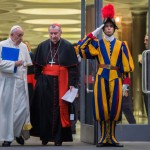 Cardinal Pietro Parolin, Vatican Secretary of State, will go to Moscow on August 20-24, and the news of his upcoming trip re-opened the discussion about a possible trip to Russia by Pope Francis.

Cardinal Parolin’s official schedule for the trip has not been released yet. It seems certain that the Cardinal will meet both President Vladimir Putin and Patriarch Kirill of the Moscow Patriarchate of the Russian Orthodox Church.

A papal trip to Moscow is a longtime dream. It dates back to 1990s, when – after the fall of the Berlin Wall and Soviet President Mikhail Gorbaciov’s visit to the Vatican – Pope St. John Paul II hoped that, with a trip to Moscow, he could finally certify his concept of a Europe breathing with two lungs.

That longtime dream trip was never realized. Joaquin Navarro Valls, then Director of the Holy See Press Office, once said that the trip was “an open door as long as it is not closed.” It has been so until now.

The trip was not impeded by political issues. The Pope had been invited to Moscow several times. The first invitation came from Gorbaciov during his visit to the Vatican on December 1, 1989. Gorbaciov’s successor, Boris Yeltsin, invited the Pope when he first met him on December 20, 1991, and after his second visit in February 1998. However, at the end of this last meeting, a spokesperson from the Kremlin underscored that a papal visit to Moscow could only take place after a “careful preparation” and a settlement in Catholic – Russian Orthodox relations.

The issue behind the scenes was that of the “Uniates”, which, in Russian Orthodox  parlance, refers to the Catholics of the Byzantine Rite from western Ukraine, whose church properties had been given to the Orthodox Church after Stalin declared the former outlaws.

This issue still weighs on Catholic-Russian Orthodox relations, especially now that Ukraine is enduring an almost forgotten conflict. The issue burns so much that the Moscow Patriarchate has raised complaints over the Ukrainian situation many times. It even happened during the 2014 Synod of Bishops in Rome, when Metropolitan Hilarion addressed the issue in a speech delivered at the Synod, the main purpose of which was to discuss issues concerning the family.

Pope Francis is well aware of the issue. In an in-flight press conference, he emphasized, “if I were to go to Moscow, I should also go to Ukraine.”

However, the Holy See’s relations with the Russian Orthodox Patriarchate certainly have strengthened.

The first, historical meeting between a Pope and the Patriarch of Moscow took place on February 12, 2016 in Havana, Cuba. At the end of the meeting, the two delivered a joint declaration that the Pope hurried to describe as a “pastoral declaration,” in part, because it conceded a lot to the Moscow Patriarchate in diplomatic terms. For example, the Ukrainian Greek Catholic Church was described as “Uniate”, a term taken from a document from the 1990s, the Balamand declaration. The use of the terms “uniates” created some bitterness in the Ukrainian Greek Catholic Church.

Out of that meeting, the very peculiar “diplomacy of the relics” was born: following on Patriarch Kirill’s request, a small piece of St. Nicholas’s relics safely kept in Bari left the Italian city and traveled to Moscow and St. Petersburg, to be venerated by Russian faithful according to a devotion that dates back to the times of the undivided Church.

This “ecumenism of people” that goes beyond the still open theological issues will be one of the issues at the center of the meeting between Cardinal Parolin and Patriarch Kirill.

The Moscow Patriarchate pursues a pragmatic ecumenism, to be carried forward via an alliance between the Churches against secularization and in defense of persecuted Christians, as well as an alliance on life and family issues. However, other theological issues are still controversial. The theme of the next Catholic-Orthodox International mixed commission on theological dialogue  generated much discussion, as Moscow does not want to talk about the Church of the first millennium, because at that time the Moscow Patriarchate did not exist. The same Patriarchate suffers by being only the fifth in the sinaxis of the Orthodox Churches, though it is the largest in numbers.

Patriarch Kirill took steps toward the Catholic Church, thereby going against the most extremist part of the Orthodox world. The dialogue with the Holy See goes on, and the meeting with Cardinal Parolin will help to foster it.

Cardinal Parolin and Patriarch Kirill already met in Moscow on February 12, 2016, at the time of Pope Francis’s meeting in Cuba with the Patriarch. After the joint declaration, the wounds of the Greek Catholic Church were salved by Cardinal Parolin’s trip to Ukraine, by the Extraordinary Collection for the Ukraine which the Pope launched on Apr. 24, 2016, and by the most recent Cardinal Leonardo Sandri’s, the Prefect of the Congregation of Eastern Churches, trip to Ukraine.

Cardinal Parolin met with President Putin twice: on November 25, 2013 and June 10, 2015, during the two visits by the head of the Kremlin to the Vatican. In both cases, the geopolitical situation was at the center of the talks, with a special focus on the Middle East and Ukraine.

Speaking to Il Regno, Parolin recalled that relations with Russia date back centuries. He also recalled that Czar Nicholas I paid a visit to Pope Gregory XVI in 1845, and this led to a concordat signed for the Holy See by Pope Pius IX.

The turning point in relations between the Holy See and Russia was the meeting between Gorbaciov and John Paul II that took place three weeks after the fall of the Berlin Wall. After that meeting, a first agreement was made to re-establish the diplomatic relations that had been interrupted during the Soviet era.

However, as Cardinal Parolin averred, it is since the 14th century that the Rus’ of Moscow and the Holy See entertained relations. In 1472, Pope Paul II blessed the marriage between the Great Prince of Moscow, Ivan III, and the Byzantine princess, Sophia. The ambassadors of Popes Pius V and Gregory XIII regularly visited Moscow, and the Holy See also operated as a mediator in the Livonian War, that took place in 1582-1583 and involved Russia, Poland and Sweden (the mediation was undertaken by the Jesuit, Fr. Antonio Possevino).

Since the 16th century, Russian-Holy See relations were strong and intermittent at the same time. The Holy See and Russia established full diplomatic ties in 1816, though the Russian representatives in the Vatican did not have a Vatican counterpart in St. Petersburg. However, papal envoys were always sent to take part in the coronations of the emperors of Russia.

In 1960 the Holy See restored regular contacts with the Soviet Union. In 1967, these contacts were brought to a “stable working level”, and the Soviet Foreign Affairs Minister, Andrei Gromyko, met many times with Popes Paul VI and John Paul II. In February 1971, Archbishop Agostino Casaroli, Secretary of the Council for the Church’s Public Affairs, traveled to Moscow to ratify the Holy See’s commitment to the Treaty for the Non Proliferation of Nuclear Weapons.

After Gorbaciov, President Yeltsin visited the Vatican in 1991 and 1997. President Putin visited the Vatican for the first time on June 5, 2000, and he returned on November 5, 2003. Between the 1990s and 2000s, Holy See-Russian relations fluctuated because of discussions over the Russian law on religious freedom, but also because of strained relations with the Moscow Patriarchate.

Now that the dialogue with the Russian Orthodox Church has reached an historic peak, Cardinal Parolin’s trip to Moscow can be considered an additional step in the dialogue. Besides promoting geopolitical relations – Archbishop Antonio Mennini, one of the most important of the Holy See’s past representatives to Moscow, is now working in the Secretariat of State – the aim is that of advancing the dialogue with the Moscow Patriarchate. Greeting St. Nicholas’s relics, Patriarch Kirill said that his meeting with the Pope “was not a unique chance.”

Everything is seemingly working together to foster the possibility of a papal trip to Moscow. Will this be the first concrete outcome of this new Vatican Ostpolitik?