Behind Pope Francis: A Hidden Vatican 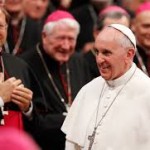 Neglected by the media, there is a hidden Vatican that is working tirelessly to promote the human being. It is the Vatican of diplomacy, the Vatican that sits at international conferences and mediates for peace, the Vatican that employs its weight and influence in order to foster the defense of every human being. This Vatican is out of the news apparently because it is difficult to report about it. But perhaps the real problem is deeper: even people who work in the Vatican are not really aware of it.

A glimpse into this hidden Vatican was given on February 20 at the presentation of a book about Giorgio Filibeck. Filibeck was an expert in international law, a layman who served for almost 40 years as an official of the Pontifical Council for Justice and Peace. The book – titled “Giorgio Filibeck. A Man for Rights” and published by the Vatican Publishing House – brings together contributions by people who worked with Filibeck, and is edited by Tommaso Di Ruzza, currently Director of the Financial Information Authority. Di Ruzza entered the service of the Holy See ten years ago, replacing Filibeck in the Pontifical Council for Justice and Peace.

Guido Raimondi, a Judge of the European Court of Human Rights, is one of the contributors of the book. In presenting the book, he recounted that Filibeck had drafted, backed and promoted the Council of Europe’s Recommendation No. (2000) 3 on the Right to the Satisfaction of Basic Material Needs of Persons in Situations of Extreme Hardship.

“The recommendation was welcomed under the legal doctrine that underscores how misery and the consequent social exclusion that compromises human dignity cannot be denied or ignored,” Raimondi stressed.

Raimondi affirmed that Filibeck took inspiration from a 1951 ruling of the Swiss Federal Tribunal in proposing a juridical instrument with the aim of guaranteeing every human being’s basic material needs. This meant “establishing the right of everyone – whether or not it was legally recognized – not to be left to die because of hunger, cold or lack of basic necessities,” said Raimondi.

The recommendation was accepted in 2000, following four years of discussion. It represented one of the milestones of the Council of Europe’s history.

This is only one of the many points the Holy See has added to resolutions, international documents and diplomatic conferences in its effort to serve the common good. This tireless work is never acknowledged outside. Nor is it acknowledged within the Holy See.

Nevertheless, the much-debated reform of the Roman Curia should be based on a comprehensive and accurate assessment of the work of the Holy See. The rationalization of structures and the implementation of subsidiarity in administration may solve many organizational problems. A hiring freeze may solve the problem of costs. But the real issue is that an overall vision seems to be lacking.

At the moment, many Vatican dicasteries publicize themselves by organizing activities with the intention of making a distinctive media impact. For instance, a source in the Vatican noticed that the 24 hours of adoration organized by the Pontifical Council for the Promotion of the New Evangelization is praiseworthy, but it is not the kind of activity that should be entrusted to a pontifical council. Parishes should be charged with the organization of these activities, while pontifical councils should be called upon to provide a general vision and eventually to supervise activities. As Vatican dicasteries have become ever less prophetic in their vision, in part, because they have taken over parish activities, the Church’s thinking has failed to make an overall impact in the world.

This is one of the hot topics that led to discussions over curial reform. What need is there for Vatican dicasteries? How do they carry out their tasks? What is their general utility?

The responses to these questions are mostly pragmatic – sometimes curial reform seems mostly cosmetic: names of dicasteries are changed, but this does not improve their functioning. A general lack of overall vision hampers the formation of a solid framework for reform.

Some observers have noticed that “the proposals for reform lack coherence. A person with good sense could have written them better.”

Underlying this issue is one of the effects of Pope Francis’ pontificate: more than a unified general vision, what we find are mostly particular visions. And – in the midst of the current gang war – everyone wants to get his hands on the Vatican.

It should be clearly understood that this is not something that has happened only during Pope Francis’ pontificate. All the other pontificates – with no exceptions – have experienced it. It is, however, paradoxical that the pursuit of particular interests, and their consequences, has multiplied under Pope Francis.

Francis has always maintained that he does not have an agenda for the Church; nevertheless, he has inadvertently helped many others to put forward their own agendas, and to hide them behind his back. Behind a Papacy described as “revolutionary” or “purifying”, the same old gang war continues today. This gang war was already the object of discussion during the pre-conclave meetings, and the new Pope was entrusted with carrying forward a reform to bring it to an end. At the moment Pope Francis has not yet succeeded.

In the meantime the “hidden Vatican” keeps on working on behalf of humanity. The life of Giorgio Filibeck proves this. Filibeck dedicated his entire life to enhancing human rights and to explaining to the world that the Church is not opposed to these rights, it promotes them. His untold life story, revealed just a bit by this book of memories, is only one of the many Vatican lives that are worthy to be told, of people who were dedicated to the institution, and who were able to reform it, step by step. These servants of the Holy See never claimed to be undertaking a revolution, but they also never retreated from necessary reforms.

It was individuals like these who led the Vatican to become a State with a modern penal code, with a financial law that surpasses that of other States, with solid international credibility. Unfortunately, their stories are not hard news; they are part of the hidden Vatican. This hidden Vatican should be taken into account when curial reform is discussed. Otherwise the Vatican will remain subject to the attacks of those who want to seize control of it from the outside, or worse, it will be at the mercy of those who want to undermine its sovereignty.

9 Responses to Behind Pope Francis: A Hidden Vatican