Quantifying the Holy See’s Commitment To The Common Good, At The 23rd Session of The Human Rights Council Pope Francis, His First One Hundred Days 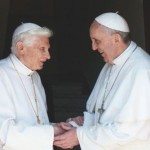 «In the concrete history of the Church, however, a contrary tendency is also manifested, namely that the Church becomes self-satisfied, settles down in this world, becomes self-sufficient and adapts herself to the standards of the world.» Moreover: «Not infrequently, she gives greater weight to organization and institutionalization than to her vocation to openness towards God, her vocation to opening up the world towards the other.» And finally: «Once liberated from material and political burdens and privileges, the Church can reach out more effectively and in a truly Christian way to the whole world, she can be truly open to the world.» Who said this?

A first – instinctive – answer to this question would be: Pope Francis. He made «a Church of poverty and for the poor» his mark from his very first meeting with journalists. He, who has increasingly often repeated that «institutions are useful, but up to a point». He even exhorted the future Papal nuncios to «keep their inner freedom.»

The statements at the beginning of this article are actually not Francis’. They are Benedict XVI’s. The now Pope emeritus made those remarks in Fribourg, on September 25, 2011, to Catholics engaged in the life of the Church and society.

Benedict XVI’s words are relevant beyond the German context, even if it is true that the German Church experiences this pitfall in a very specific way. The German Church is wealthy thanks to the kirchensteuer, the State tax – of a considerable amount – on religion. It has been able to multiply social structures and charities, becoming almost self complacent. Thus, the German Church has lost sight of God, while social structures have become the center of its work. The most painful thing is that an ever smaller number of Christians is employed in Catholic-inspired social institutions. However, love and care for the other, an essential aspect of the mission of the Church, came from Christianity. In the name of social services, identity is lost. And, lacking identity, the orientation of the mission of the Church is also lost.

As we noted earlier, this is not only a problem in Germany. Recently, Archbishop Mariano Crociata, Secretary General of the Italian Bishops’ Conference, standing before 200 workers from Catholic-inspired health facilities, underlined the need for all – workers and institutions – to preserve their identity and to have workers properly formed about Catholic principles.

More generally – in the wider context comprising all services and institutions that claim to be Catholic inspired – much has been debated, for example, about the identity of Catholic universities. A debate that has been fierce in the United States. The Cardinal Newman Society is one of the associations that is carrying on the quest for identity: its website is full of denunciations of government intromission in the hiring of teachers in Catholic schools and universities. At the same time the Cardinal Newman Society does not hesitate to call attention on universities that are ever more detached from their own Catholic heritage.

Cordes and Luetz presented a copy of the book to Benedict XVI, whom they met at the Mater Ecclesiae monastery, within the Vatican walls, where he is now living. Benedict reportedly agreed: yes, there is a certain theological continuity between his Fribourg speech and Francis’ preaching.

It is still uncertain how Pope Francis will transform this message, captured in well-meaning slogans, into concrete endeavors.

During his pontificate, Benedict XVI not only maintained how important it was for the Church to become «less worldly ». He used the word «demundanization», which means, according to Msgr. Ludwig Mueller, to «separate and unify» – but also to build a legal framework to overcome the identity threat. Ultimately, it is a matter of faith. But the question is: how can faith be nurtured if there is not a true adherence to the Gospel when teaching, caring, or carrying on works of charity in the name of the Church?

Under Benedict XVI there was a reform of the Caritas Internationalis constitution, based on the motto Caritas in Veritate, Charity in Truth (not accidentally the title of Benedict XVI’s social encyclical). The motu proprio Intima Ecclesiae was also released, to regulate diocesan charities and reinforce the bishops’ oversight over them.

That is the starting point Pope Francis’ has inherited, and from which he looks onwards to a reform of Pastor Bonus, the apostolic constitution that regulates the work of Curial offices. Will this reform achieve a change of hearts or will it merely be an organizational restructuring?

Ultimately, «it is not a question here of finding a new strategy to re-launch the Church. Rather, it is a question of setting aside mere strategy and seeking total transparency, not bracketing or ignoring anything from the truth of our present situation, but living the faith fully here and now in the utterly sober light of day, appropriating it completely, and stripping away from it anything that only seems to belong to faith, but in truth is mere convention or habit». Benedict XVI said it in Fribourg. But it seems hardly anyone took note of it at the time.