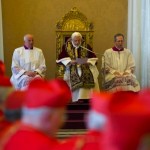 The fifth anniversary of the historic renunciation of Benedict XVI was anticipated by a letter written by the now Pope emeritus to an Italian newspaper. The Pope emeritus described himself as “in a pilgrimage to Home”, a wonderful metaphor to describe the last path of his earthly life.

Five years after, it is worth looking back at the Final magisterium of Benedict XVI, that is, to his words and speeches in those last two weeks that preceded the sede vacante. It was a series of last public words that, in fact, best epitomize the situation of the current Church.

All of those words were overshadowed by the emotion and the lack of clarity of that time: it was a historical moment, lived with the Pope and on the Pope’s side. Rather than listening, we were looking for answers to questions, and those questions were left unanswered. Or, in the end, they got a response, but it was no accepted. Because, as the principle of the Ockham’s razor say, the simpler response is the most correct one. But, as human nature has it, the correct response is never fully accepted.

Benedict XVI thinks that the history of the Church meets eschatological requirements: everything has a sense, including the Church itself. To Benedict XVI, the Church is a living body, as it was to Romano Guardini, one of his favorite theologians.

Feb. 13, two days after the announcement of the renunciation. General Audience. Benedict XVI reads at the beginning a statement to reiterate that he had taken his decision to renounce to the Petrine Ministry out of his free will and with no constraints. Then, he starts the catechesis, focused on the Gospel of the following Sunday, especially on the passage of the temptations of Jesus in the desert.

“Reflecting on the temptations to which Jesus was subjected in the wilderness invites each one of us to answer a fundamental question: What really counts in my life?”, says the Pope. He then speaks about the temptations and finally he summarizes:

“What is the essence of the three temptations to which Jesus is subjected? It is the proposal to exploit God, to use him for one’s own interests, for one’s own glory and for one’s own success. And therefore, essentially to put oneself in God’s place, removing him from one’s own existence and making him seem superfluous”.

For this reason, Benedict XVI asks to “overcome the temptation to subject God to oneself and one’s own interests, or to put him in a corner, and be converted to the correct order of priorities, giving God first place”, as this is “a journey that each and every Christian must make over and over again”. Converting – the Pope adds – “means letting God transform us, in order to stop thinking that we are the only ones to build our existence. It means recognizing that we are creatures, that we depend on God, on his love, and that only by “losing” our life in him can we gain it”.

To sum it up, it is not possible to be a Christian as a mere consequence of living in a society with Christian roots. Christian life must be renewed every day, confronting “the temptations that a secularized culture constantly suggests and in the face of the critical opinion of many contemporaries”.

“It is far from easy – Benedict XVI affirms – to be faithful to Christian marriage, to practice mercy in daily life, to make room for prayer and inner silence; it is far from easy to oppose publicly the decisions that many take for granted, such as abortion in the case of an unwanted pregnancy, euthanasia in the case of serious illness, and embryo selection in order to prevent hereditary diseases”, as “the temptation to set faith aside is always present and conversion becomes a response to God that must be strengthened several times in life.”

February 13, evening, Ash Wednesday Mass. 15 days to the end of the Pontificate. Pope Benedict’s homily seems to be the consequence of the morning catechesis.

“To ‘return to God with all your heart’ — Benedict XVI maintains — on this Lenten journey means embracing the cross, following Christ along the path which leads to Calvary, unto complete self-giving. It is a journey which teaches us each day to abandon our selfishness and self-absorption in order to make room for God, who opens and transforms our hearts.”

The Pope continues: “Our witness, then, will always be more effective the less we seek our own glory and the more we realize that the reward of the just is God himself: being one with him here below on the journey of faith, and, at life’s end, in the luminous peace of seeing him face to face for ever.”

February 23, end of the Curia Lenten Spiritual exercises. Benedict XVI delivers his last address to the Curia. He reminds to the Curia members that, after he retires, “there will not be a visible and exterior communion” between him and them, but there will be “a spiritual closeness, a profound communion in prayer. With this certainty, let us go on, certain of the victory of God, certain of the truth of beauty and love.”

February 24, the last Angelus. Benedict XVI’s words deal with a central issue of his pontificate: scandals are not the problem, the problem is faith. The Gospel of the Day presents the Transfiguration, and Jesus is described as climbing up the mountain.

“I hear this word of God – Benedict XVI says — as addressed to me in particular at this moment of my life. Thank you! The Lord is calling me “to scale the mountain”, to devote myself even more to prayer and meditation. But this does not mean abandoning the Church; indeed, if God asks me this it is precisely so that I may continue to serve her with the same dedication and the same love with which I have tried to do so until now, but in a way more suited to my age and strength.”

February 27, last general audience, Pope Benedict speaks of the Church, recounts that he received letters from the most important people on earth, but also from normal people. These people ”write to me as brothers and sisters, as sons and daughters, with a sense of a very affectionate family bond”. And from this – Benedict XVI adds – “one can sense palpably what the Church is – not an organization, an association for religious or humanitarian ends, but a living body, a communion of brothers and sisters in the Body of Christ, which makes us all one. To experience the Church in this way and to be able as it were to put one’s finger on the strength of her truth and her love, is a cause for joy at a time when so many people are speaking of her decline. But we see how the Church is alive today!”

February 28, meeting with the Cardinals before the departure to Castel Gandolfo. Benedict XVI underscores to them once more that the Church “is not something devised by planners, but a living reality.” He adds: “The Church lives, grows up, is reawakened in souls that, like the Virgin Mary, welcome the Word of God and conceive it through the Holy Spirit. They offer to God their flesh, and in their poverty and humility they become able to generate Christ today in the world. Through the Church, the mystery of incarnation stays present forever. Christ keeps on walking through all the times and all the places.”

All of these words are part of the final magisterium of Benedict XVI. He provides the notion of a Church as an alive community, focused on faith. This is the legacy we tend to forget, more than anything else. We focused very much on his speech to the clergy of Rome, that identified the real Council and the Council of the media, and we commented a lot his governing decisions.

And yet, his final magisterium is a hymn to the joy of the Gospel and of relying in God. This is what is really missing in the current debate.