Cardinal Etchegaray has passed away, marking the end of a Vatican universe 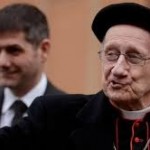 Cardinal Roger Etchegaray passed away Sep. 4, marking the end of a Vatican universe that will never be again. With the death of Cardinal Etchegaray, the Church does not only loses one of the main collaborators to St. John Paul II. She also loses a dear friend to Paul VI, and the man who brought about things that we now take for granted in the Church. They were not the norm, before him.

Two years ago, Cardinal Etchegaray returned to France. He was writing a book on the mystery of God, and he decided to spend the last period of his life with his family. So, he emptied his apartment, full of memories, where Pope Francis went once to see him. Cardinal Etchegaray went away silently, modestly, without saying farewell to anyone.

In his Roman apartment, there was a small sign over the door bell. It said, in French: “I carry on like a donkey.” That sentence was the best description of Cardinal Etchegaray and was the title of a book of his that summarizes his thinking. The Cardinal did not want, as a bishop, a motto nor an emblem, because he considered them a “Medieval legacy”.

In the apartment he lived in Rome there was a small dining room. Among the many nativities, there was one which Fidel Castro gave him. It was Cardinal Etchegaray who opened a path to Cuba for the Church.

Ordained a priest in 1947, a friend to Paul VI, he took part as an expert in the Second Vatican Council. Cardinal Etchegaray was also engaged in France in Catholic Action and the French Bishops’ Conference. He was archbishop of Marseille from 1970 to 1985. This were Cardinal Etchegaray’s first decades in life.

The second part of his life begins when he is called to Rome. He is appointed president of the Pontifical Council of Justice and Peace from 1984 to 1998 and Cor Unum from 1984 to 1995 (the dicasteries were named differently before John Paul II’s 1988 Curia reform).

Cardinal Etchegaray opened new horizons for the Church of today. He had been among the organizers of the first encounter among religions in Assisi in 1986, and was always supportive of the meeting. He opened a dialogue with China, which he visited in 1980, 1993, 2000 and 2003. He began the links with Cuba.

He went to Cuba for the first time in 1989. He got the permission to celebrate Mass in the Cathedral of Havana. The square in front of the Cathedral was filled with an enormous crowd. According to the reports, Cardinal Etchegaray spoke to the crowd at the end of the New Year’s Mass. “What do you want me to ask the Pope?” “That he come.” “The Pope has heard your voice.”

He returned there, he spoke with Fidel Castro, and the líder máximo gave him that nativity set that made Cardinal Etchegaray very proud. The nativity set was the symbol of Castro’s opening to a possible first, historical trip of a Pope to Cuba. That trip took place in 1998 when St. John Paul II kissed the ground of la Isla.

When John Paul II tried to prevent the Second Gulf War in 2002, Cardinal Etchegaray was the Pope’s special envoy to Baghdad, sent to comfort the people and to seek an eventual channel of peace.

Cardinal Etchegaray was also very highly esteemed in the Vatican because of his human touch combined with a rare intellectual depth. In 1997, John Paul II chose him to preach the Spiritual Lenten exercises to the Roman Curia. He preached on the theme “Jesus, true Lord and true Man”, based on a sentence by the French philosopher Blaise Pascal: “Without Jesus Christ, we do not know who God is, nor who we are.”

Cardinal Etchegaray cannot be replaced. There are no cardinals or bishops like him, as there is no one like Cardinal Jean Louis Tauran, who passed away last year, or like Cardinal Paul Poupard, still alive, who paved the way for the Church in the Soviet Union through culture.

It was a generation of French priests who had excellent skills and great faith. They were all men of the Second Vatican Council, devoted to the future, but with their feet on the ground in serving the Church.

Everybody appreciates the example of these great personalities of the Church. Everybody recognizes the importance of their work. Carrying their work forward is way more complicated.