Benedict XVI nailed it: the crisis of sexual abuse is a crisis of faith Pope Francis, what will the Curia reform look like?

Easter, will the Church be risen again? 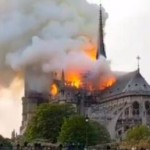 The Holy Week began with the impressive scene of the Notre Dame Basilica in Paris on fire. It was even thought that the structure of the Church would not hold. In the end, only the 13th-century wooden roof was lost, along with the 19th-century spire designed by Violle Le Duc, that came down because of the blaze.

A bronze cock was on the spire. The bronze cock contained three relics: one of St. Genevieve, protector of Paris; one of St. Denis; and a thorn of the crown of thorns of Jesus – the full crown is secured in the Notre Dame treasure. These three relics were believed to be lost in the flames. They were instead found intact in the semi-liquefied cock.

The crown of thorns, the St. Louis’ mantle and the relic of Jesus’ actual cross were saved by the chaplain of the firefighters, Jean-Marc Fournier, who went into the flames in an attempt to save the relics, and succeeded.

In the end, symbols of faith remained intact. Almost miraculously. And believers can find a connection between this miracle and another extraordinary event that took place in Paris: while Notre Dame was subjected to the blaze, a small group of people spontaneously kneeled to pray. In the meantime, Archbishop Michel Aupetit asked the churches of Paris to ring the bells to call people to pray for Notre Dame.

Paris is now without a cathedral but has found a popular cathedral, made of the living faith. This is the cathedral at the basis of a reconstruction of the Church.

Notre Dame de Paris became simultaneously the symbol of the death and resurrection of Christ celebrated in Easter. It is possible that Notre Dame’s ashes will pave the way for a moment of real faith in the secularized and anti-Christian France.

The blaze in Notre Dame was not intentional, but in the beginning, everybody suspected it was. There was a reason why. On March 17, two weeks before, a fire was intentionally set to St. Sulpice church.

St. Sulpice’s fire came at the end of a tough start of the year for Christian churches in France. The Observatory for Christianophobia has been monitoring since 2015 the anti-Christian attacks in France and documented 65 acts of vandalism and profanation of churches there during the first two months of the year. According to their figures, February 2019 was the month with the most anti-Christian attacks since monitoring started in 2015.

Notre Dame’s blaze was not intentional, though. It was not an attack against a monument of Christianity. However, the images of the flames on the roof are a highly symbolic moment for Europe.

Europe is its cathedrals, and its cathedrals are its people. The Italian historian Angela Pellicciari has explained it well in her book “Una storia della Chiesa”.

In the book, she also quotes Rodolphus Glaber, a monk and historian of the 11th century.

Glaber wrote that around the year 1000 “everywhere in the world, and especially in Italy and France, churches were reconstructed, though many were in good conditions and not in need of restoration. It was as if people were challenging other people. As if that world wanted to shake off old clothes to wear instead new white vestments through the new churches. In the end, the faithful restored almost every cathedral, a lot of monastic churches and even oratories in the villages.”

Pellicciari commented that “the builders of Medieval cathedrals are the people.”

Cathedrals are then an expression of that pursuit of God that Benedict XVI outlined in 2008 in France. Delivering remarks to the world of culture in the College des Benardins, Benedict XVI stressed that Quaerere Deum, seeking God, was the main goal of monks who started a new civilization from their monasteries.

Everything, in the great European cathedrals, aims at speaking of God. History changes. Villages are built around churches and big cities around cathedrals. In the meantime, art, music and architecture work in unity to carry forward the message of God. People start organizing the great pilgrimages to Compostela, Amiens, Jerusalem, Rome, Cologne, and Rocamadour.

The importance of cathedrals is almost forgotten. And yet, while everybody was looking with awe at the Notre Dame cathedral collapsing, there was a small group of people that kneeled to pray, while another person thought about saving the relics. He took care of the relics because he believed, and because he knew that those relics were more valuable than the whole building.

These people are the representatives of the “small groups of people” Joseph Ratzinger mentioned in a series of 1969 radio conversations. The content of those conversations appears prophetic.

Ratzinger said that “The Church will emerge out of this crisis having lost a lot. It will become small, it will have to restart from the beginning. The Church will not be able to make use of many of the buildings that it built in prosperity. As the number of its faithful will diminish, the Church will also lose many of its social privileges.”

Ratzinger continued: “Despite all of these changes, the Church will find again and with all the energy the essential, what has always been its center: the faith in God One and Three, in Jesus Christ, the son of God made man, in the support of the Holy Spirit that will last forever.”

The Church, then, will “restart from small groups, movements and a minority that will put faith and prayer at the center of their experience and will experience sacraments as a divine service and not as a problem of liturgical structure.”

Ratzinger added that this new Church was going to be “more spiritual, and will not attribute itself any political mandate flirting with left or right. It will be hard. The process of crystallization and clarification will make the Church poor. It will become a Church of the little ones…. The process will be long and tiring. As an outcome, a Church interiorized and strongly simplified will come out after these divisions.”

A force that will illuminate men. Men will experience great solitude. To the extent that “they will completely lose the sense of God”, Ratzinger said, “they will feel horrified because of their poverty. At that moment, they will discover the small community of believers as something brand new. They will recognize in this community the hope for themselves, the answer they always sought for in secret…”

Those few people kneeling in front of Notre Dame are the small groups still faithful. The collapse of Notre Dame indicates the collapse of human structures. Now, it is not just time to reconstruct. It is time to build a new community of faith. Foster new vocations. Spread the word of God.

The Church will be then really risen.