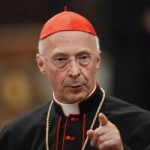 “May the voice of Jesus return in Europe.” The final message of the plenary assembly of the Council of European Bishops Conferences (CCEE) that gathered in Minsk from September 27 – October 1 relaunched the Christian mission of Europe. The move came after a silent shift of paradigm that took place over time to base itself on the Gospel. This shift has one main protagonist: Cardinal Angelo Bagnasco.

Bagnasco, Archbishop of Genoa and, until May, President of the Italian Bishops Conference, was elected in September 2016 as President of the CCEE. For some time he has developed the position that evangelization should begin all over again from Europe. Since he became CCEE President, he has continually stressed that “Europe has not exhausted its mission in history”, though he also explains that Europe cannot be the measure for everything.

The Minsk gathering was the first plenary assembly at which he presided. Cardinal Bagnasco came to this rationale by way of an accurate study of sources. In his inaugural address, the Cardinal quoted the philosopher Georg Philipp Friedrich von Hardenberg, known as Novalis, who in 1799 wrote that “if Europe were to detach itself completely from Christ, it would end,” and he reminded the gathered bishops that the Jewish philosopher Karl Löwith had stressed that the notion of alterity was born from Christianity, not out of the Renaissance.

Looking at sources does not mean just academia. Sources are needed to prove that the concept of Europe cannot exist if it is detached from Christianity. Sources are useful for telling how Europe is really Christian in its roots, as as is shown by its cities, cathedrals and traditional cultures. However, all of this cannot be considered part of a cultural struggle, as many want to believe. Looking back to sources simply means to give a just recognition to the merit and the role of Christianity in building European society. The real roots of the European crisis probably lie in this secular need to eradicate Christianity from history.

Cardinal Bagnasco identified the issue a long time ago. He is the Archbishop of Genoa, a city whose cathedral is dedicated to St. Laurence, a martyr who preferred to die rather than to accept paganism.

When he was not yet CCEE President, he preached a homily for the feast of St. Laurence, one that – looking back in time – can be considered a sort of program of his CCEE presidency.

Bagnasco said that Christians are martyrs also today. They are so because of the bloody trials already experienced, but also because of other forms of persecution, “sophisticated, but not for this reason less cruel, legalized, but not for this reason less unjust.” He also pointed his finger at a Europe that “considers Christianity as divisive,” and at a world that “in the name of values like equality, tolerance and rights” wants to “marginalize Christianity” and “establish a world order without God.”

The theme of the world order without God became one of the leit motifs of his CCEE presidency.

Speaking with the ACI Stampa news agency at the end of the CCEE symposium on young leaders of Europe held in Barcelona in March, Bagnasco underscored that “the Second Vatican Council, a real spring in the life of the Church, then encountered the 1968 cultural revolution. Born in the US and later transmitted to France and to Italy, this cultural revolution progressively dismantled Western culture and feeling, and did so also through the sexual revolution, which was part of the cultural revolution.”

This dismantling – the Cardinal maintained – “made the human being ever more individualistic and less related with others; hence, always more alone. In my opinion,” he continued, “this process toward a strong individualism did not happen by chance. In my opinion, it is part of a strategy, because as long as it continues to dismantle Western culture it makes the individual more isolated in the name of freedom and pure autonomy. This is how people are made weak. And a society of weak people is a weak society. Who profits from that? Someone does,” he concluded.

He added that this “pragmatic nihilism” was pursued with targets of “cultural, political and above all economic hegemony.”

This is Cardinal Bagnasco’s core issue, and it is a profound one. He looks at ideas instead of responses to problems that are raised from time to time. For Cardinal Bagnasco, it is not enough to react – for instance – against the pro-euthanasia laws that are spreading quickly in the world, or to legislative proposals that aim to eradicate religion from society, or to terrorist acts.

This approach is the more far-sighted, as is proven by looking at various initiatives – for example, the Catholic-Orthodox Forum that the CCEE organizes every year. This year, it took place in Paris, in France, a country that has been shocked for a year now by terrorist attacks that are allegedly religiously-motivated.

The response of the Forum to this terrorism crisis came at the end, when a document outlining 14 points was released. The document recalled the importance of religious freedom, explained how religious freedom is both misunderstood and reduced to mere freedom of expression, while it also deplored the religious illiteracy that is a consequence of some forms of secularism.

This new approach tackles the issue of the “World Order Without God,” a program designed to relaunch a Christian mission centered on the proclamation of the Gospel.

The climax of this new approach came in Minsk. No other choice of venue could be more symbolic for the CCEE than Minsk. Belarus is a bridge place: it is linked to Russia, also because its own Orthodox Church is not autocephalous, but depends upon the Moscow Patriarchate. As at the same time, Belarus’s gaze is set on Europe. Archbishop Tadeusz Kondrusiewicz, the Archbishop of Minsk, was also the first Roman Catholic Archbishop of Moscow, and worked tirelessly there to build connections among the souls of the city.

This is why Minsk epitomizes European issues so well: the need to go beyond a Soviet mentality that still strikes many countries in Eastern Europe; the awareness that Eastern Europe is indeed the place where the future of Christianity lies, because faith and devotion have not been completely eroded there by secularization. Instead, the faith became stronger in Belarus because of many years of state-imposed atheism, and the need to carry on an ecumenical dialogue that can still be the only concrete response to nationalisms is recognized there.

Bishops in Europe understand very well these challenges. But Cardinal Bagnasco is probably the man best qualified to summarize them.

Under his guidance, the main theme of the plenary assembly centered became more and more centered on the proclamation of the Gospel. Evangelization was not simply sidelined as a topic in the past; this is simply not true. However, with Cardinal Bagnasco evangelization received a stronger impetus since, as a theme of discussion, it bridges sociological and theological approaches to Europe’s present problems.

Another example: the issue of young people was discussed at the CCEE gathering, and Cardinal Bagnasco, along with CCEE Vice-Presidents Cardinal Vincent Nichols and Archbishop Stanislaw Gadecki, presented the outcomes of the discussions.

During the press conference, Cardinal Nichols provided a snapshot of the situation of youth today in Europe and commented that young people need to be heard, whereas Archbishop Gadecki said that everything should be focused on the love of God. Cardinal Bagnasco had the final word.

“The main problem for young people,” he said, “is adults.” He explained that young people are in conflict with adults in a way that is “completely different from the 1968 cultural revolution.” At that time, young people rejected the world of adults and all of their institutions,” while today, “young people do not radically reject adults who are on their side, regardless whether they are parents or clergy. If there is resentment, it is because they do not see the adults standing on their side, whether they are parents or Churchmen.”

This is the awareness at the basis of the new Christian mission of Europe. “To talk about God,” the first message, is now fundamental again, because it is only with a real evangelization that Europe will be able to find its way back. And Cardinal Bagnasco is convinced that this is the mission.