From external consultants to consultants from within. Is Pope Francis becoming “institutional”? Vatican, a crucial week for reforms. With an eye on finances

From Benedict to Francis. One year after, the same problems 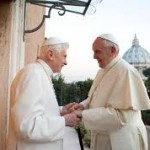 One year after the historical resignation of Benedict XVI, a document of the UN Committee on the Human Rights simply proves that nothing has changed in the spirit of the world. In the end, Pope Francis must face the same demons and ghosts that have always been menacing the Church, and that consider the Catholic Church so dangerous that it becomes imperative to undermine its moral teaching and – why not – its international prestige. At the same time, the Holy See reaction shows that its internal problems have also remained the same.

The vile of the UN document is not in the accusations on the cases of child sex abuses by clergy, but rather in the “reach” of the concluding observations about the second Holy See Periodic Report on the Convention on the Rights of the Child. The committee even asked, several times, for changes or amendments to Canon Law, for example on abortion.Its observations also intrude into purely religious issues, implicitly attacking the secret of confession («due to a code of silence imposed on all members of the clergy under penalty of excommunication…»), and even regretting that «the Holy See continues to place emphasis on the promotion of complementarity and equality in dignity, two concepts which differ from equality in law and practice provided for in article two of the Convention and are often used to justify discriminatory legislation and policies.»

So, according to the UN Committee, composed of 18 independent experts, the Holy See should stop freely expressing its Gospel-rooted worldview. To justify their request, the members of the Committee even interpret article two of the Convention on the Rights of the Child, which in fact only binds the states parties «to respect and ensure the rights set forth in the present Convention to each child within their jurisdiction without discrimination of any kind, irrespective of the child’s or his or her parent’s or legal guardian’s race, colour, sex, language, religion, political or other opinion, national, ethnic or social origin, property, disability, birth or other status.»

Rather than an attempt to consider “the spirit” of the convention, the UN document sounds more like a general accusation, almost an attack on the Holy See sovereignty via an attack on its moral principles. It is a nuanced approach, since the distinction between Vatican City State law, Canon Law, and the international rights of the Holy See, is explained and considered. The document addresses the Holy See’s “moral authority”, acknowledges that the priests are not Holy See employees and that Vatican City State has no jurisdiction over Catholic-run schools.  However, the committee then de facto asks the Holy See to take a firm stand on given issues. In the end, the committee is subtly asking the Holy See to change Catholic doctrine: to stop insisting on fundamental rights, on the complementarity between man and woman, and to stop combating abortion. In essence, the committee tries to persuade the Holy See to renounce to speak out loudly.

What has been most interesting to the media are the accusations on the handling of children sex abuses by clergy. The committee requests the Holy See to open up its archives and let it be known how many pedophile priests there are.  However, the accusation that the Holy See made possible abuses on millions of children, and the criticism about the transfer of priests and well-known child sexual abusers «from parish to parish or to other countries in an attempt to cover-up such crimes, a practice documented by numerous national commissions of inquiry,» do not reflect reality. There is no mention of the exemplary commitment of Joseph Ratzinger, before and after becoming Benedict XVI, to combat child abuses. Nor is there any consideration of a Vatican City State law on sex abuse that, if used as an international legal standard, would make every other state outlaws in the fight against pedophilia.

In an interview granted to Vatican Radio, Silvano Maria Tomasi, Permanent Observer of the Holy See to the UN Office in Geneva, noted that the UN document «seemed to have been written before the meeting of the committee with the Holy See delegation. The latter gave detailed and precise answers on several points, but the answers are not reported in this final document or seem to have been given serious consideration.» Tomasi also underlined that «probably some NGOs with interests in homosexuality, gay marriage or other issues, have provided input, strengthening in some way an ideological line.»

This ideological line is evident, since the gender theory vocabulary is widespread in the document. The committee asks for the acknowledgement of «reproductive health rights» (a euphemism for an alleged right to abortion), the request to eliminate from Canon Law the terminology about legitimate and natural children, even the exhortation to remove from Catholic textbooks «all gender stereotyping which may limit the development of the talents and abilities of boys and girls and undermine their educational and life opportunities.»

This vocabulary is pervasive in United Nations documents, and it is opposed by the Holy See in the name of an integral humanism oriented to the common good, which is the very international agenda of the Holy See.

That of gender is not a new ideology. The last Christmas greeting address of Benedict XVI to the Roman Curia focused on gender theory.

On that occasion – 21 December2012 – Benedict XVI stated that the very idea of human nature is in crisis, a crisis based on gender «as a new philosophy of sexuality.»

«The very notion of being – of what being human really means – is being called into question,» noting that sexual complementarity, and one’s sex as a given, «is what is now disputed.»

This speech is part of Benedict XVI’s legacy, who at that time had already decided when and how to resign.

Now, Pope Francis is called to pick up the thread again. According to sources, Pope Francis has said in a private audience with bishops that the gender ideology is «demonic». Yet, until now, there has not been an official Pope stance on these issues. The Pope has not showed support for the demonstrators of Manif pour Tous in France, who have protested against the institution of same sex marriage and the possibility of adoption for same sex couples in France. Nor has the Pope mentioned the protests in Europe on February 2, shortly before a vote on the Lunacek Report.

The report focuses on the “Yogyakarta principle”, according to which «the special rights for gay people are part of universal human rights.» All the 120 special rights of the gay community must be applied in order to fulfill, at the international level, respect for human rights. On February 4 the report was approved in the European Parliament. It is not binding, but the approval makes the document’s views the official position of the European Union.

The day after the approval of the Lunacek Report, the UN Committee on the Rights of the Child final observations were made public. Perhaps a Pope’s preventive declaration would have helped. Or perhaps an articulated and timely communication by the Holy See was needed, challenging the document for his juridical overreach. This kind of reply did not take place if not two days after the release of the report, even though the report reached the Vatican almost two days ahead of its public release, and its content was well known to Vatican advisors on communications.

The strategy was not to prepare any immediate reply.  It is hard to understand why this was the case. The Vatican experts that took part in the discussion of the first report in 1995 foresaw the risk that something like this could happen, and today they say that theyare not surprised at all about the language and content of the new document. Some experts even suggest that the Secretariat of State should reply through diplomatic channels.  The Holy See, they proposed, should convene ambassadors accredited to the Holy See to complain that the committee went beyond its tasks, arrogating to itself the right to interpret the spirit of the Convention.

It was also well known that the  international media was awaiting with great expectation the document, attracted by the questions on pedophilia. Many journalists got credentialed to the UN office in Geneva, their interest mostly focused on the clergy sex abuses scandal.

In fact, Vatican communications advisors were not even timely in presenting information about the Church’s struggle against pedophile in priests. They should have recalled that Benedict XVI reduced to laity almost 400 priests, explained the Holy See efforts to fight the abuses, or at least pointed out the special section about the Church’s response to abuse of minors in the homepage of the vatican.va website.

Vatican communications advisors did not think, either, about highlighting best practices. For example, in Italy there is the Meter Association chaired by Father Fortunato Di Noto. Meter has become an international reference on the fight against pedophilia. In 20 years, the Meter association has welcomed, accompanied and helped more than 1,200 victims of abuses, and denounced more than 1 million and a half pedo-pornographic web sites, thus creating a virtuous circle of information on the pedophilia issue which gave a lot of fruits. Unfortunately, Meter is at risk of ceasing to exist due to a lack of funding.  It is however a beacon  and an example in the Catholic galaxy combating pedophilia. Why have stories like that of Meter not been featured, in order to change the narrative of the media mainstream?

One year after Benedict XVI’s resignation, pedophilia, gender theory, and above all shortcomings in Holy See communications remain front and center issues to contend with. Despite the hiring of several advisors oncommunications, the Church is still reacting to the big issues of the day, instead of being ahead introducing them in their right light.  This is the reason why the Church can be caught off guard in the debate. This was the case in 2006, when Benedict XVI delivered his famous lecture at Regensburg. From that starting point, Benedict XVI was able to start an unprecedented dialogue with Islam. It is now Pope Francis’ turn to build bridges of reason with a world always ready to attack the Church.

6 Responses to From Benedict to Francis. One year after, the same problems