Why is Laudato Si so crucial to understanding Pope Francis’ pontificate? Pope Francis, what is his real reform?

Has the discussion on the next Pope already begun? 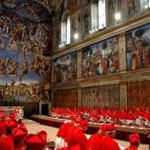 “If I sit in a conclave tomorrow, I would not know the person sitting next to me.” This is what a cardinal – I will not reveal his name – told me some time ago. This says a lot about the feelings of the college of cardinals before an eventual election of another Pope.

This is not a new feeling for cardinals. There are plenty of tales from conclaves telling the story of cardinals who try to gather information about their colleagues. Sometimes, the names of the papabili pop up as a provocation; other times, it is a poll. Sometimes, they just rise during the conclave. Cardinals cannot keep track of all the data.

Following a conclave, some cardinals have commented to journalists that, had they known about the seminary years of a particular cardinal ahead of time, they might not have supported that person. Other cardinals have made it known that, had they known things were going to go they way they did, they would have not voted the way they did. By the way, all of these statements come after a conclave. All of them aim at hiding an underestimated characteristic of a conclave: no matter how much the Holy Spirit inspires it, a conclave is a tremendously pragmatic event.

Last week, a book by Edward Pentin came out. It is titled “The Next Pope.” It aims to provide information on some “papabili” for the next conclave. The book includes a dossier on 19 red hats that the author thinks could be voted as Pope Francis’ successor.

Indeed, the dossiers meet the need of cardinals to know each other and know something about each other. Will it be enough? Will it be important to understand what cardinals think on some topics, or how they made up their minds in some situations?

Although this kind of information is important, I am convinced that none of this information will be decisive. The cardinals will look to someone able to support the weight of a legacy and to defend them on some particular issues.

Pope Francis’ election was motivated by the need for a “change of narrative” – this is what some cardinals said after the conclave – and what a better change of narrative than electing a pope who was at once Latin-American, anti-institutional, filled with missionary spirit and so much in tune with the times?

The change of narrative was planned. The campaign for Cardinal Bergoglio began even before the publication of the famous “Diary of the Conclave,” when for the first time, the archbishop of Buenos Aires emerged as a possible candidate. Some years before, his name was mentioned in some circles, to the point that Sandro Magister wrote a profile on him.

Joseph Ratzinger’s election in 2005 was mostly motivated by the need to sustain the weight of the image of his predecessor, who had been at the helm of the Church for 27 years. Benedict XVI was the only suitable personality: he had no skeletons in the closet; he knew the Curia, but he was out of the Curia in mentality; and he could steer the Church toward a new epoch after John Paul II. Those who were against Ratzinger found in him the ideal sacrificial lamb, since they were sure that critics could quickly eclipse any pontiff after John Paul II. Those who supported Ratzinger found him the only possible choice since Benedict XVI was undoubtedly going to stop any theological or doctrinal drift.

We could even go further back in time, and keep on collecting stories. And every story would tell us that, in the end, the election of a Pope is born during a conclave, but it is prepared beforehand. Even the surprises are surprises just to some people. For example, the Archbishop of Krakow, Cardinal Karol Wojtyla, was well known to the College of Cardinals. Even the Roman Curia knew him, since Paul VI asked him to preach the Curia Lenten Spiritual Exercises in 1976.

However, the next Conclave will be different, since the preparation for the Conclave is being different. Since 2015, there have not been consistories other than those to create new cardinals, and thus cardinals lost their “room” to exchange opinions and ideas. In 2014, Pope Francis summoned a consistory on the topic of the family, and the lecture by Cardinal Walter Kasper sparked controversies. The year after, the consistory discussed Curia reform. Nothing after that.

True, the cardinals can also establish relations among themselves outside of the consistories. On the other hand, the consistory provides an environment that cannot be replaced. During a consistory, mutual knowledge is deepened, and this can be decisive.

Many cardinals will enter the next consistory without knowing the other cardinals. The majority of these cardinals are residential bishops, and not Curia officials as in the past. Even this fact will contribute to a change in the traditional operations of a conclave.

There are just a few cardinals well known at an international level. Some of them because of good press, others because they have accumulated merits. Many cardinals will set their gaze on Cardinal Pietro Parolin, Vatican Secretary of State, who is a reference point for many inside and outside the Curia.

Another well known cardinal is Matteo Zuppi, archbishop of Bologna, whose appeal also derives from his experience as a mediator with Sant’Egidio. Cardinal Luis Antonio Tagle is well known, as Pope Francis tapped him as prefect of the Congregation for the Evangelization of Peoples.

Finally, two cardinals could gather consensus because of the work they do now or did in the past: Cardinal Marc Ouellet, prefect of the Congregation of Bishops, and Cardinal Petr Erdo, archbishop of Budapest.

None of these names may gather a substantial majority since the college of cardinals is fragmented in its composition. For this reason, there will be surprises. Real surprises.

The election of the next pope will likely be based on the personal charism of the cardinals and how they can play this charism in the pre-conclave meetings. Bergoglio was able to stir hearts with an intervention that Cardinal Angelo Sodano, then dean of the College of Cardinals, echoed in his homily at the Mass for the Pope’s election. It was not by chance.

I would not be surprised, then, if the cardinals might set their gaze on unexpected candidates, like Cardinal Cristóbal López, archbishop of Rabat: his way of talking and facing issues might be appealing to the cardinals.

In the end, we should not think about the next pope, but about the legacy of this pontificate. It is a legacy hard to assess. It is a piecemeal legacy, without a shared vision. It is filled with the notion of the pontificate on the go, carried forward by trial and error. There was a great vision, but there was not a great program on how to get to the vision.

The discussion on the next pope reflects the issue of legacy. Also, the debate on the next pope could be open ended, as Pope Francis might be guiding the Church for a long time. The fact that people are already thinking about his successor reveals a problem. And the problem is that people did not understand where this pontificate is going, and what will be its next steps.