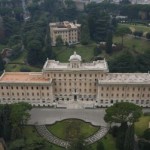 t would be difficult, long and tough for specialists to detail what is that Pope Francis effectively reformed with his motu propio on the approval of the new law for Vatican City State, published on December 6. However, this reform can at least show some of the modus operandi of Pope Francis’ reforms since the beginning of the Pontificate.

First of all, a clarification is needed: the reform of the Vatican City State administration is not the Curia reform. Pope Francis did not change the government of the universal Church. He rather changed the organization of the administration of the State. It is different.

Vatican City State exists to give the Holy See a territory, thus safeguarding its sovereignty. As head of the Vatican City State, the Pope is not a citizen of any other State, and the same is true of those Cardinals and officials of the Holy See, who have Vatican passports, and hold a functional citizenship that guarantees independence.

It is not by chance that the goal of the reform is that of “making even more clear the particular institutional finality of the Vatican City State, called by its nature to guarantee the See of Peter the absolute and visible independence.”

The criteria of the reform – an explanatory note of Vatican City State reads – were “functionality, transparency, normative coherence and organizational flexibility.”

In the end, the reform is about changing the way the administration is managed, and, in the end, achieving a reduction of costs. This is one of the goals of Pope Francis’ pontificate.

The Curia reform merged several pontifical councils in new dicasteries, and several competences coordinated by the single Dicastery for Communication, that became the umbrella of all the media department. Likewise, the reform of the Vatican City State is aiming at reducing offices.

Vatican City State administration branches decrease from 9 to 7, central offices from 5 to 2, while “attributions and competences of the operational bodies reorganized have been reviewed and aggregated according to the principle of functionality and effectiveness.”

The first talks of Curia reform also focused on the possibility to establish a “moderator Curiae”, and in general about the establishment of controlling bodies for dicasteries. Likewise, the Vatican governorate will have a control body, a “Control and Inspection Unit” with the “specific tasks of verifying norms and procedures of evaluation of the efficiency and effectiveness of the activities of the bodies.”

This control body will likely become crucial for the overall financial reform. At the beginning, the possibility of a unified balance sheet of the Holy See and Vatican City State was considered, but the real issue was controlling the State administration. The State administration generates the biggest profits, through the Vatican museums. And the State administration experienced mismanagement cases – the first Vatileaks was originated by a dispute on the cost of St. Peter’s Square Christmas tree put in place by the then secretary of the Governorate, Archbishop Carlo Maria Viganò.

The fact that there is a “directorate for the economy”, that distinguish Vatican City State from other Curia offices, show that there is the need for more transparency.

The reform totally changes the way the governatorate works. Vatican City State is always more closely aligned with Holy See action, and is not considered a reality per se.

The reform also does not foresee any automatic promotion, nor assured positions. Also these topics – sovereignty and halt to careerism – have been a Pope Francis’ leitmotiv.

This was shown by Pope Francis’ decisions in appointing bishops and creating cardinals. The Pope does not consider anymore some position as cardinalatial.

The Pope also showed always more the attitude to defend the Holy See sovereignty, after a first era characterized by a Vatican outsourcing and external consultants.

The reform of Vatican City State shows Pope Francis modus operandi also in another area: the reform institutionalized what had been already renewed.

The reform keeps the already existing disciplinary and staff and commissions, and includes among the governing bodies the Committee for Monetary issues, that had been already established following the Monetary Convention signed by the EU and Vatican City State; and the Commission for the Selection of Lay Personnel (CIVA), established in 2017. So, the reform just made these changes institutional.

Likewise, the Curia reform already brought about the establishment of three new dicasteries after a series of mergers that just need to be institutionalized in the next apostolic constitution Praedicate Evangelium

Guiding lines of the reform are transparency and accountability. One of the novelties is that officials at every level will be held accountable for their criminal acts but also regarding how they look after patrimony entrusted to them.

The office of the President and of the General Secretary are reformed with changes that were actually already implemented in praxis. Also in this case, the motu proprio merely institutionalized already existing reforms.

In addition to that, the branches cannot take measures without the authorization of governing bodies. The governing bodies are thus reinforced, and this meets the criterion of major central control Pope Francis began to adopt. This criterion was also in play recently, when the Pope appointed Archbishop Charles J. Scicluna as adjunct secretary to the Congregation of the Doctrine of the Faith: the appointment showed a major centralization in tackling the response to abuse.

In general, the whole reform shows the wish for a change of mentality. Until now, the Governatorate had a plethora of offices and departments, all of them quasi independent. For this reason, the new law will not have effect until June.

By the way, the guidelines of reform mirror Pope Francis’ intentions. They could be found in other reforming processes already started: the moderate decentralization that turns into a major central control; the need to do things before making these things institutional; the reduction of costs, necessary in a structure needy of a reform.

In addition to that, also this Pope Francis’ reform, like many others during the Pontificate, was made public at the eve of a meeting of the Council of Cardinals. The Council was called to counsel the Pope, not only about Curia reform but also in governing the universal Church.

The fact that the Pope makes his decision public before the Council is a sign: Pope Francis listens to everyone, and this is the reason why he establishes advisory bodies. In the end, the Pope will always make the decisions himself.