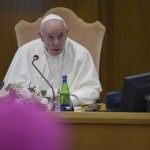 The first week of the Special Synod for the Pan-Amazonian Region met all the expectations. Discussions at the Synod raised the issue of priestly ordination of married men, generated an extensive debate on indigenous peoples, sparked the notion that indigenous peoples are not able to understand celibacy, and the possibility to ordain women. Integral ecology and integral human development have been part of the discussions as well.

The theme of the Synod has put the Eucharist at the center of the Church again. However, how the discussion developed around this central topic cannot be underestimated. If the Eucharist must be made available at all cost, then consideration must be given to married priests ordination and women ordination to have more people to consecrate and deliver communion.

But if the Eucharist is instead considered a gift that Jesus gives via consecrated people, there is a need for a sacred order with its rules, and before that, a specific vocation to the priesthood.

These discussions were foreseen. On the other hand, it may be that the Special Synod for the Pan-Amazonian region will not to be remembered for the scope of the debate or the proposals that the assembly will advance. Instead, this Synod’s mark will be its influence on the next Conclave.

The fourth Synod summoned by Pope Francis began the day after the sixth consistory of the Pontificate. The majority of the cardinals eligible to vote in a Conclave was created by Pope Francis. They constitute almost 60 percent of the voting College of Cardinals. In any protracted Conclave, this block of cardinals chosen by Pope Francis will be the kingmaker.

The cardinals have had no time to meet. After the 2014 consistory, Pope Francis never summoned an ordinary meeting of all the cardinals to discuss particular issues. These meetings would have offered a good occasion for cardinals to get to know each other.

Since the consistory no longer offers this kind of opportunity, the Synod of bishops has become the networking point for the Church hierarchy. Among the cardinals that participate in the Synod, there are also chiefs of the Vatican dicasteries. Their contributions, whether they are public or not, are food for thought, since they disclose what they want and do not want for the Church.

The real risk at this Synod is not about celibacy, but in “territorial exceptions” to the doctrine of the Church. The Amazonian exception would allow the priestly ordination of married men in the area, while Germany is looking for its own exception in the upcoming “binding” Synod that will discuss celibacy, sexual morality, and women ordination. Every episcopate or diocese could claim a need for exceptions.

It seems there is a design or pushes to make the Catholic Church a “federation of bishops’ conferences”, faithful to the Pope but with full autonomy, also in the doctrinal field. The design is the expression of an anti-Roman push that has always been present in the Church.

Those who love the Catholic Church do not want to make any concessions to this anti-Roman spirit.

This is the reason why the statements at the Synod become decisive. Interviews, public and private speeches, are carefully pondered. Cardinals look with interest not only to the other red birettas but also to bishops, considering that all of them might be created cardinals in the future.

There are people that garner always more attention. One of them is Cardinal Robert Sarah, prefect of the Congregation for the Divine Worship, who defended priestly celibacy in his presentations at the Synod. Another one is Cardinal Peter Turkson, who stood for celibacy as well and stressed that doing away with celibacy is not the solution to the crisis of vocations.

There are other issues closely followed within the Synod. Some are in favor of the so-called “Amazonian exception,” or promote a particular topic. Cardinal Michael Czerny was created a cardinal following his pro-migrants activity in the Migrants and Refugees section: there is a lot of curiosity about him.

And there is a lot of curiosity about how cardinals Maradiaga, Aguiar Retes and Hollerich will moderate the “minor circles” of the Synod, which are intended to draw conclusions and bring proposals; as there is curiosity around cardinals with different positions, more nuanced or conservative. Every detail is essential to understand the future Church.

In the end, there is a Catholic world that expects some answers from the Synod. Based on these answers, they will decide on which side of the Church they stand.

For this reason, the Synod has become decisive in view of the next Conclave. Two Synods and the publication of the exhortation Amoris Laetitia revealed the positions in the field. The Synod of youth was a stress test for both sides. Now, the Synod on Amazonia could bring about some real push for doctrinal change.

Cardinals and Bishops, along with the people of God, are now discussing the model of the future Church. The new proposals will be designed according to that model. And the race to the next Conclave always becomes more interesting.